“Reclaim Australia” movement spreads Down Under

“Reclaim Australia” movement spreads Down Under 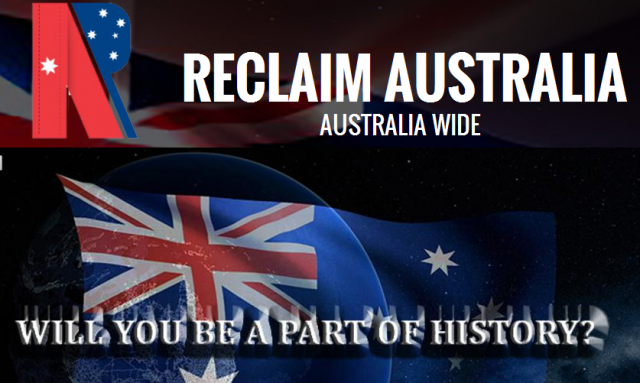 Since that time, many Australians have been re-evaluating the inclusive, feel-good policies toward Muslim immigrants supported by the government, including those that related to certification for halal-based foods.

Many Australians, unhappy with the lack of response to their objections, have begun organizing Down Under a citizen-based organization named “Reclaim Australia”:

“Reclaim Australia” rallies were held in 16 different locations across Australia Saturday [April 11, 2015]. Billed as a call for “patriotic Australians” to “stand together to stop tax, Sharia law and Islamization,”. the rallies provoked violent encounters with counter protesters who billed the events as racist and anti-Muslim.

Most Reclaim Australia protesters interviewed seemed to agree that the group was opposed to Islamic extremism and not Muslims who follow Australian law and whose intentions were not to change Australian culture.

I have a contact in that country, who is following “Reclaim Australia” closely (my source must remain unnamed, due to connections to the government). She indicates that the halal certification is pervasive, and seems to be a way to garner special rights. For example, the halala promoters require certification on everything (water, spice) at every level down to cleaning supplies. Furthermore, most government agencies and public places (sports complexes, museums, schools, hospitals) only offer halal slaughtered meat.

Why is that important? As with all other issues in politics and government, one needs only to follow the money.

This certification process has angered a small number of consumers, however. Kirralie Smith is the founder of Halal Choices and does not support Halal labelling. Ms Smith and other anti-Halal activists claim certification fees are being directed to mosques which aim to impose Sharia law in Australia. She says her objections are not about racism, however.

‘There are companies wanting to make a lot of money out of it,’ says Ms Smith.

‘A lot of these companies are just paying the certification because they don’t want the hassle.’

The Australian concerns seem reasonable, given the connection between some mosques and their members (e.g., the Islamic Society of Boston mosque in Cambridge, Mass., investigated for Islamic terrorism and the religious home of the murdering Tsarnaev brothers).

Ban FGM and introduce mandatory 10 year jail terms for perpetrators and organisers. This includes those who send girls overseas to have FGM carried out outside Australia. Once their jail term has been completed, their citizenship should be cancelled and they be immediately deported back to the country they originated from.

On the 25th of April 1915, Australian and New Zealand soldiers formed part of the allied expedition that set out to capture the Gallipoli peninsula during World War I. There is an annual celebration of that event that went off without a hitch this year, in part because of a series of raids that led to the arrest of five men over a ISIS-inspired attack.

Despite the obvious presence of Islamic terrorist wannabes, “Reclaim Australia” participants are mocked by the elite press and derided as racist...sort of the same way my Tea Party group was mocked when we dared to protest government policies.

“The people who took part in the Australian rallies were average citizens from many ages and races who have issues with current policy. The issues the average person was protesting are centered around Islam. Not necessarily against the people who follow, but the ideology hiding behind the religion. This ideology wants consideration given but does not give any in return and people are getting fed up.”

The world has really turned upside down when a citizen can’t protest mandates on the items they are able to purchase, the imposition of extreme religious laws on a civil society, or female genital mutilation without be called either racist or insane.

I would demand proof of the financial connection, because it looks like the “Jewish tax” libel got transplanted.

It is exactly that. It’s the same paranoid antisemitic propaganda, with a scan-and-replace substituting “halal” for “kosher” and “imams” for “rabbis”. There is nobody “demanding” halal certification on anything, but if a company wants to sell to Moslems they will of course seek certification, just as if they want to sell to Jews they will seek kosher certification. And as any American can see, in the USA kosher certification is pervasive, and can be found on everything, including water, spices, and detergent.

As for the claim that “most government agencies and public places (sports complexes, museums, schools, hospitals) only offer halal slaughtered meat”, that it pure bulldust, and if Ms Eastman’s “source” claims it is so then I am calling that person a liar.

The same applies to the claims about sharia law. Of course Moslems follow sharia, just as Jews follow halacha. There is no attempt at all, either in Australia or in the USA, to impose it on non-Moslems, and every single one of the instances cited are instances of Moslems following their own law, exactly as Jews follow ours. The attack on sharia is an attack on halacha as well, just as the attack on halal is an attack on kashrut. Jews need to stand up and oppose it, if only for self-preservation.

“Islamophobia” is a much-abused term, flung about till it has lost all meaning. The vast majority of allegations of “islamophobia” are nonsense. But there really is such a thing, and it really is just as ugly as antisemitism, and this is a rare example of it.

I hope the Aussie’s can reclaim their heritage. The Western Europeon Judeo-Christian culture is superior to all others. Not perfect, just better. We need to reclaim our heritage here but we’d have to start at the top. Unfortunately, I don’t see that happenin’ anytime soon.

There is a way to eliminate it, both in Australia and in the U.S. in relation to matters of race, religion and freedom of association. It may require some blood to run in the streets, however.

Good luck to them.

I hope the Aussies are smarter than us. It looks as though at least one group is.

The larger the percentage of Muslims in a country, the more they demands they make. Muslims are masters at playing the “victim card” to their advantage. We need to follow Australia’s example.

When will Americans rise up and reclaim America for American citizens, and not 3rd-world, Spanish-speaking, criminal, illegal invaders? It’s high time we throw the invaders out, by force if necessary. With gun if necessary. We need “Operation Wetback II”, and another president with the wisdom and fortitude of Ike.

Face the truth, piety in Islam leads to violence and unwavering demands to be treated as your superior in every way.

You are free to practice Islam, from far far away where you do not pose an immediate local threat. We can then read about you in National Geographic, in a description of some exotic tribe stuck in the 7th Century.

Hey, it’s theirs to lose.

How do you halal slaughter a kangaroo?

While that question might be a bit tongue-in-cheek it’s actually a very interesting question. How do marsupials fit into the halal (and kashrut, which is very similar) tradition?

The answer to that question is not “settled science” to some.

Halal slaughter requires throat slitting while alive, and that the animal bleed out. A wild lawfully-harvested kangaroo must be shot instantly dead.

In a farming setting, Australian animal welfare law requires that animals to be halal slaughtered are stunned before the throat is cut (or immediately after in some exceptional cases). This requires two slaughtermen – one to stun, one to cut.

Kangaroos are not farmed.

It would be fine if Australia also banned Male Genital Mutilation.

Go to hell, you antisemite. You can try banning it if you like, but I can tell you that Jews will not comply. We will spit on your ban, and the only way you can hope to enforce it will be by putting us back into concentration camps. Do you really want to go there? Of course you do.

No one forced those sharia clowns to move to Australia and they should not be forcing their wills on the Australian people. If sharia is so darn important then they should move to countries which have it already or they will learn rather quickly that their intolerance will not be tolerated.

Nobody is “imposing their will” on the Australian people. It’s these xenophobic Pauline Hanson types who are seeking to impose their will on Moslems (and Jews, though they know enough to keep shtum about that in public). And unlike 0bama’s fantasies about Islam being in the fabric of America since its founding, that really is true about Australia; the Ghan are an integral part of Australian history, and they were Moslems.