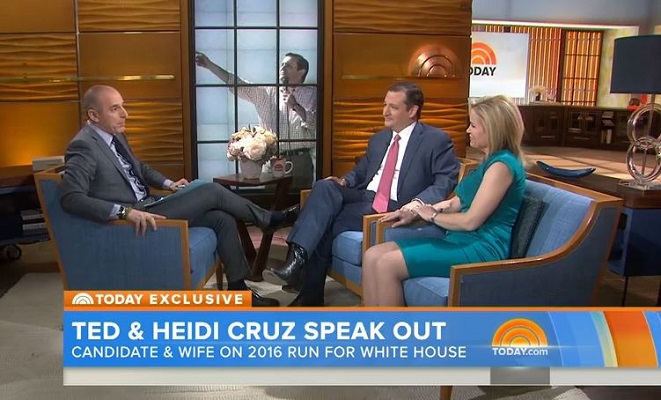 Matt Berman at The National Journal asked, “Will Ted Cruz Be Able to Convince Anyone to Take His Campaign Seriously?“, and the answer, apparently, is a resounding “yes.”  According to Public Policy Polling (PPP),

Ted Cruz has the big momentum following the official announcement of his candidacy last week. His support has increased from 5% to 16% in just over a month, enough to make him one of three candidates in the top tier of GOP contenders, along with Scott Walker and Jeb Bush.

PPP goes on to observe that “Cruz has really caught fire with voters identifying themselves as ‘very conservative’ since his announcement. After polling at only 11% with them a month ago, he now leads the GOP field with 33% to 25% for Walker and 12% for Carson with no one else in double digits.”

It seems that despite early predictions, Ted Cruz as presidential candidate is, as Jazz Shaw at Hot Air notes, “stubbornly refus[ing] to implode”:

Even after he won his seat, the media was keeping up the drumbeat, frequently abetted by senior members of his own party. (Wacko Birds, anyone?) But long before it was certain that Cruz might run for the White House, he began defying the narrative media formula. Those of us who didn’t know him were expecting the avalanche of stories which would erode his status as a serious politician. The problem is, they didn’t happen. Where were the “gaffes” we were all promised? He was supposed to come out and immediately begin screaming about the President being from Kenya, saying that women should enjoy being raped and calling for the South to secede again.

Unfortunately for the cable news talking heads, it never happened. Cruz staked out a number of domestic and foreign policy issues and began beating the drum with his own proposals for how to meet those challenges. The media seemed to shoot themselves in the foot by tripping over each other to give the Senator air time, waiting for the expected crazy to emerge. There were times when his tactics were fairly brought under scrutiny, such as his approach to the budget battles / government shutdown situation, but that was a difference in opinion on legislative strategy, not the hoped for wild man moments. In the end, all they came up with was a recitation of a Dr. Seuss book during a filibuster, but anyone who looked briefly beyond the dishonestly edited clips on TV saw that it was actually a short message to beloved children. Not exactly the stuff of which career crashes are made.

Cruz’s presidential campaign is off to a good start, and as he told Matt Lauer, his goal is to put together a “broad coalition” of voters for 2016:

It remains to be seen whether or not Cruz can broaden his appeal among Republican voters–beyond those who identify as “very conservative”–and also gain ground among Reagan democrats and Nixon’s “silent majority.”

This is sort of mirroring Cruz’s senate run in Texas. He started WAY behind by most metrics, and just kepta comin’.

And he wasn’t elected JUST by big C Conservatives, but he WAS elected by crushing the establishment GOP.

People want change, and Cruz is a change agent.

“People want change, and Cruz is a change agent.”

We have come back to full circle. When Bush was
president, conservatives started realizing what
compassionate conservatism meant; plain old lefty
agenda under a cloak of disguise. The left hated
Bush because of the war on terror lasting too long;
his defeat of Al Gore, the hanging chad mess, along
with the “now we know” corrupt media pounding him continuously. Everyone was looking for change. Then, we got Obama. Not the change we wanted. The media didn’t
vet Obama; the country ended up with a socialist/Marxist/communist out to destroy the country.

Now, we want change again. A radical change away from
the lefty agenda and Obama’s policies which are in real
danger of destroying the country.

In comes Ted Cruz riding his white horse, sword drawn!
I love what he says and know in my heart that he means it.

I hope that Americans have had enough of the “bad” and
will give someone like Cruz a chance to become president
and lead this country out of the mess we are in. If he
wins, I hope the house and senate will cooperate. I have
more faith in Americans than I do the latter. We will see.
We have a chance. My advice: Don’t fall for Jeb Bush. The media and moderate republicans will push him on us. The
big donors have already bet on him. What they haven’t
counted on is the anger of the American people. They think
we will do as we are told by our betters. I pray to God that we will not.
cooperate.

In comes Ted Cruz riding on his red horse, sword drawn! (Fixed It For You)

Please be careful with this analogy. From a biblical Revelation perspective, there is a good argument to be made that President Obama could be the first horseman of the apocalypse:

the “False Prince of Peace” (a messiah figure, but NOT the anti-Christ as is often mistranslated/misrepresented)

sent out [alone] on a white horse (a symbol of righteousness and victory),

he who sat on it had a bow (a symbol representing strength) [but no arrows, representing a ‘bloodless victory’ or deception victory by peace and agreement];

a crown was given to him (self explanatory, instead of being taken or earned),

he went out conquering and to conquer (but see above conquering through deception of strength rather than overt combat, and in Greek those words come from the same root word as “overcomer”).

Subtext: the first horseman’s actions are the catalyst for the necessity of the second horseman: WAR.

Sound familiar in regard to what happened this week with Iran?

It depends on which historical account you’re basing your metaphor on.

If we’re going with Biblical interpretation, then you’re correct, and it should be a red horse.

But I believe Rags is going with more of a Knights of the Round Table image: the White Knight on a white horse – the chivalrous, righteous, avenging hero of old, “going medieval” on the wicked dragon.

Cruz might take himself out of the running yet I doubt now that the MSM will!

All the way, Ted.

Cruz will win or he won’t, and I’d be completely happy with a President Cruz, but even if he’s doesn’t win the nom or general, this guy is articulating the conservative agenda like no other. Plus, his message will not be lost in the noise of a 8-10 horse race because he’s the only one speaking it. Walker is definitely conservative, but is not yet on the stump, so he may overlap greatly with Cruz’s message. It is certain he’ll be different. Walker seems a quiet doer, not a firebrand, whereas Cruz can do both, which is handy.

His support has increased from 5% to 16% in just over a month, enough to make him one of three candidates in the top tier of GOP contenders

Well it’s not for want of trying, on the part of the Rinostocracy! Quick, someone corner him on the important national issue of the right of boys who want to be girls to wear contour-hugging yoga pants to school! That’ll get him!

C’mon, Amy, help me coin a new slogan for Cruz:

The Obamaization of the country is nearing completion with another non-natural-born citizen rising, this time in the ‘Ican Party.

Your BS and lies don’t sale well here. Try over at the daily cossack.

Wonder if this election will be like Reagan v. Carter.
Carter, a huge failure regardless of any spin, was crushed by Reagan on the economy.
I still savor the memory of that election night hearing on the radio that Carter ceded the election before the west coast voting booths had closed.
I sure hope we have a replay.

“Wonder if this election will be like Reagan v. Carter.”

Not likely. Then there were D’s that actually loved the country, and new carter was a disaster. With a few exceptions it is now the opposite. No matter who the D’s run, they will get at least 45-48% of the vote, govt dependents all.

Romney’s infamous “47% comment” was taken out of context by the media, but was basically a summation of what you just said: Approximately 47% of voters will vote for the ‘D’, regardless of who’s the better candidate or if the ‘D’ is better for their long-term well-being or prosperity, and it’s nearly impossible for anyone with an ‘R’ after his/her name to gain any ground with those people.