Just stay home seems to be the result of the Israel Trip cancellation. 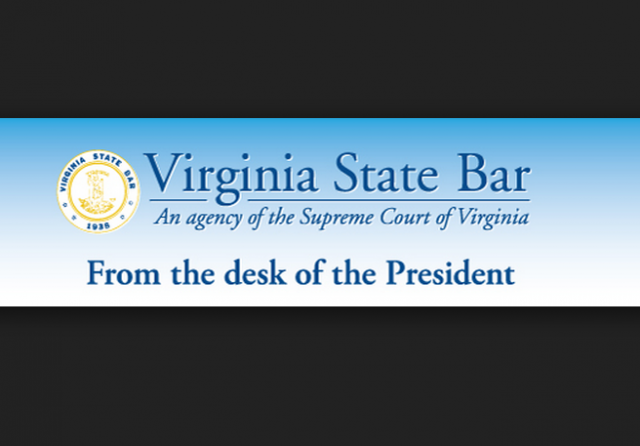 We continue to investigate the strange cancellation of a mid-year legal seminar in Israel by the Virginia State Bar (VSB).  With the help of Judicial Watch, we have served a FOIA request on VSB, and will pursue the facts no matter how long it takes, including FOIA litigation if there is no alternative.

The cancellation of the Israel trip came after an email was sent by 36 VSB members to the VSB Council on Friday morning, March 27, alleging that the members would be prohibited from attending or face discriminatory interrogation by Israeli border officials on the basis of religion and ethnicity. None of the 36 said that they actually wanted to go on the Israel trip; instead they argued that VSB should boycott Israel because of its border security policies. 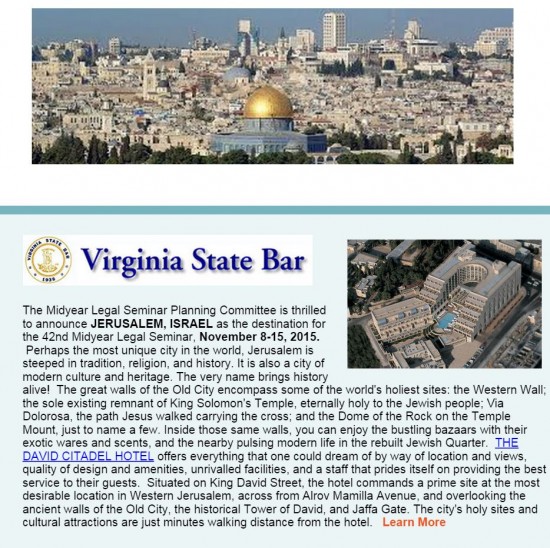 As we have documented, there never was any evidence that any VSB member would be barred or subjected to unwarranted interrogation.

To the contrary, initial claims by VSB suggesting that the Israeli Embassy confirmed that some VSB members might be barred turned out not to be accurate. An Israeli Official with whom I communicated denied such a conversation took place, and that denial was admitted by the only VSB representative to have substantive conversations with the Embassy.

Rather, a State Department travel advisory issued in February 2015, devoted mostly to Palestinian violence that may threaten tourists, contained a vague sentence about reports that Muslims or Arabs may face greater scrutiny or detention by Israeli border security. That is a complaint frequently made, of course, against U.S. border officials as well. The State Department advisory provided no evidence, only conclusory warnings based on anecdotal complaints.

Yet the complaint email ended the VBS Israel trip within hours. The email was received at 9:15 a.m. on March 27, the decision was made not long thereafter (thought the precise timing still is unclear), and by late afternoon/early evening a mass email went out to the VBS membership accusing Israel of discriminatory practices necessitating the cancellation.

(As an aside, when I was traveling as a college student I was pulled aside by Israeli security at an airport in Norway as I was waiting to board, subject to interrogation as to where I had traveled, who my friends were, why I had been to Czechoslovakia during my trip, and who I was visiting in Israel.  I must have fit some profile, no offense taken.)

The decision appears to have been made quickly, based on this interview by Virginia Lawyers Weekly with President-Elect Edward Weiner, who originally helped organize the Israel trip:

Bar leaders counted about 30 signatures of Virginia lawyers who objected to the Jerusalem program, more than those who actually wanted to take the trip, Weiner said.

Until the petition arrived, Weiner said he had not anticipated concerns about exclusion or heightened scrutiny of some bar members on the trip.

Once alerted to concerns about travel restrictions, Weiner said he envisioned a bus load of seminar participants idling at the airport while a handful of Virginia lawyers were questioned by Israeli authorities.

Martingayle and Weiner – together at The Greenbrier on Friday for a meeting of the Virginia Trial Lawyers Association – determined to call off the seminar, Weiner said.

The VBS Council was not consulted, according to a Council member with whom I communicated, even though the complaint was made to the council, and no vote was taken.

We don’t yet know the full scope of whatever investigation took place, but there does not appear to have been any chance for opposing views to be heard, or opposing evidence to be presented. No evidence has been disclosed so far indicating that other associations, including the American Bar Association, which held conferences in Israel were contacted as to whether any of their members had problems.

To call this a rush to judgment is an understatement.

Yet it has enormous propaganda implications, as cancelling conferences to be held in Israel is a main goal of the anti-Israel Boycott, Divestment and Sanctions movement.  Unless reversed or an apology is issued, the VSB decision is likely to be used in the continuing war on Israel, whether intended or not.

So how does a large group ever hold conferences abroad where there is always a possibility of discrimination, real or perceived?

VSB, having locked itself into a position on Israel, appears to be abandoning conferences abroad, as Weiner further indicated in the Virginia Lawyers Weekly interview:

As the VSB searched for an alternate destination, every site seemed fraught with political overtones, Weiner said.

At a loss for an acceptable site, the bar deemed the 2015 trip a no-go, Weiner said.

“I don’t know if there will ever be an international trip again,” Weiner said. “It’s a new world. Maybe international travel is not something the Virginia State Bar needs any part of at all,” he said.

“Our consciousness has been raised through all this,” he added.

Weiner emphasized he was speaking just for himself about prospects for future seminars.

There has been no official action by any VSB panel to consider future plans for the Midyear Legal Seminar, he said.

Fear stoked by 36 people, none of whom actually may have wanted to go on the Israel trip, created such turmoil that a trip which already was fully planned and scheduled was cancelled within hours.

Now there may never be a VSB conference abroad.

Well, let yourself be used like a tool by Alinsky followers and BDS types, and you have to eat the consequences.

They have the names of the people who caused all this.

Belly up to the bar folks! And drink your medicine….

If future trips are restricted to the USA, have they decided to take the bus? Their membership must be full of shady characters if they anticipate enhanced scrutiny at Tel Aviv, but those same characters should (if TSA actually functions) have similar difficulties taking domestic US flights.

Both the VSB President and incoming President are big Democratic donors, they have to know Obama is targeting Israel now.

It’s more of the disgraceful degeneration of Virginia, once a proud bastion of freedom, into a pathetic entity of socialists and their parasitic clients.

Sorry, Estragon, I tried to “Reply” to your post but accidentally clicked the “thumbs down” button because it’s too &[email protected]%!!#@*&%% close to the “Reply” button! Didn’t mean to down-ding you!

Anyway, what I had intended to say was that your description of Virginia’s degeneration made me imagine a Venn Diagram of Socialists and their parasitic clients, on the one hand, and crooks, on the other hand. I expect it would look something like this: http://jfwhite.org/wp-content/uploads/2012/07/venn-diagram-bb-belt-clips.jpg

Not sure of the purpose of these conventions in the first place. Seems mostly a boondoggle, for older attorneys who want taxpayers to help subsidize their foreign travel as business expenses. (And, yes, my father took a couple tours when he was such – e.g. to London to watch English trials and talk to English barristers, etc.) And, yes, I am a bit cynical – the members of the practice group I was in when I was in a larger firm fought to get to go to international conferences. They couldn’t send the entire practice group to every conference, so how to determine who to send when?

I am hoping they hold future conferences in Iran, Sudan or possibly Laos or Belarus.

I think Yemen or Qatar would be appropriate, so they could appreciate Dear Leader’s success stories…

This is such an embarrassment to the Commonwealth of Virginia.

Don’t hold your breath for the governor to speak out against this, though. He is at the very least a BDS fellow-traveler.

This state is going down the drain…….so sad.

Hey, at least their promotional materials for the trip referred to the location as “Jerusalem, Israel.” That’s more than the State Department will do.

Guess they won’t be holding any conferences in Saudi Arabia any time soon. After all there are Jewish members of the Virginia bar and they may have trouble gaining entry into Saudi Arabia. With a well populated bar, the chances are someone will have a problem at entry to any foreign country and be offended. So, that should limit the Virginia lawyers to domestic trips (if they can manage TSA screening) or travel by bus or train. Goodbye to London and Paris.