Remember the gradual lifting of Iran sanctions? Kiss it goodbye 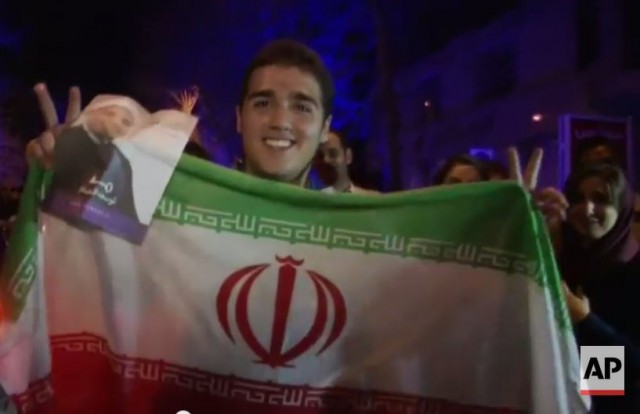 “This is the new America. We had better get used to it.”

Those were the words of an Israeli TV analyst upon learning that Obama is open to negotiating an immediate lifting of sanctions on Iran as part of a nuclear deal — the exact opposite of what he and others in the administration have been saying.

The Times of Israel reports on the development, Obama says US open to talks with Iran on immediately lifting sanctions:

President Barack Obama on Friday left open the door to “creative negotiations” in response to Iran’s demand that punishing sanctions be immediately lifted as part of a nuclear deal, even though the initial agreement calls for the penalties to be removed over time….

“How sanctions are lessened, how we snap back sanctions if there’s a violation, there are a lot of different mechanisms and ways to do that,” Obama said. He said part of the job for Secretary of State John Kerry and the representatives of five other nations working to reach a final deal with Iran by June 30 “is to sometimes find formulas that get to our main concerns while allowing the other side to make a presentation to their body politic that is more acceptable.”

Iran’s Supreme Leader Ayatollah Ali Khamenei and President Hassan Rouhani insisted last week that they would not sign a deal unless all sanctions are lifted right after an agreement is signed. Obama initially portrayed their comments as a reflection of internal political pressure, while pointing out that the initial framework agreement reached earlier this month allows for sanctions to be phased out once international monitors verify that Tehran is abiding by the limitations.

Here’s the answer in question:

It was just a week ago that Iran’s negotiators and Supreme Ayatollah accused the White House of lying about sanctions, and insisted that sanctions be lifted immediately. 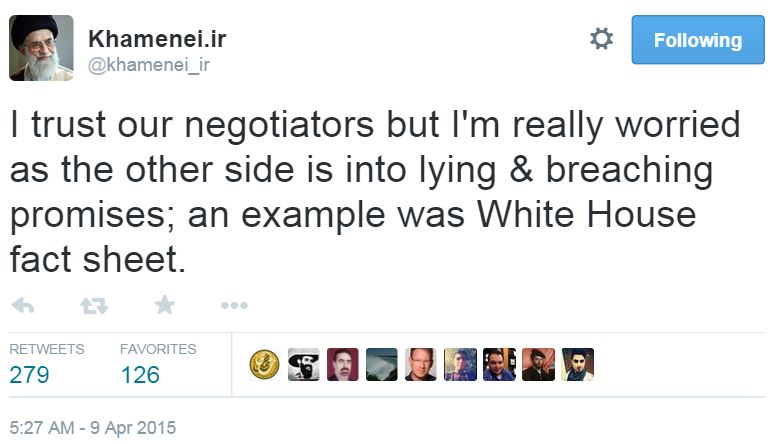 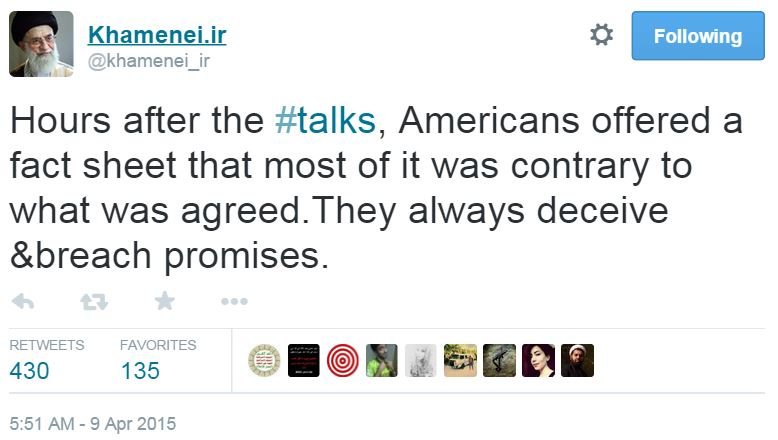 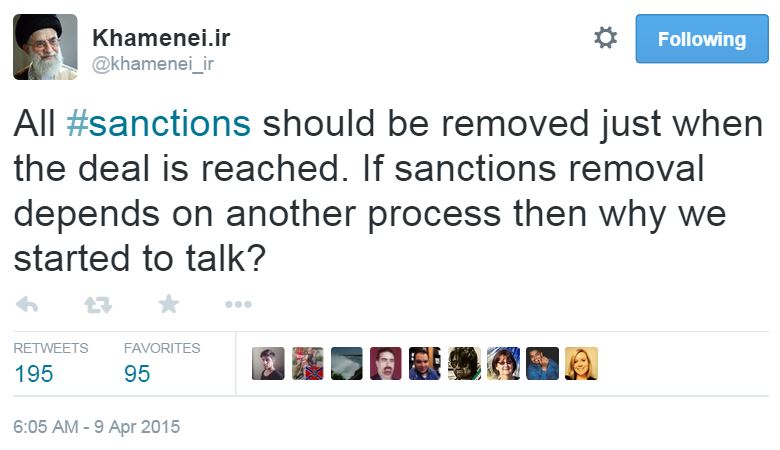 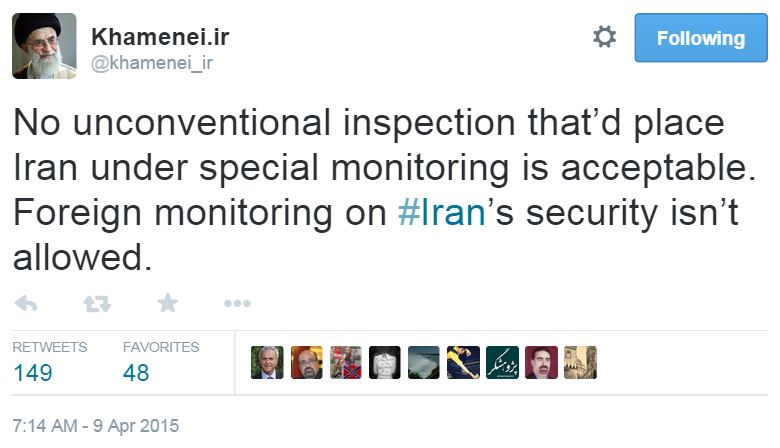 Iran senses weakness. And if I were Iran, I would too.

Hopefully it is not the new America, but the old Obama. He lies.

More concerning to me (Obama is a known lame duck concern), is why Congress seems to be enabling his surrender. If Levin is right, Congress basically empowered Obama to protect Iran as they develop their nuclear weapon. AND he’ll stop the sanctions, so they can develop their missiles and relieve domestic pressure for regime change, and Russia and others will benefit from weapons sales to Iran.

Obama already flipped the bird to the Green Party regime changers in 2009, since he only likes regime changes that remove our allies (Libya, Egypt, South Africa?)). But he is now willing to give Iran nukes, even as they chant “death to great Satan America”. The Obama Doctrine is still “God Damn America”.

obama’s words: ” while allowing the other side to make a presentation to their body politic that is more acceptable.”
That is exactly what obama does to the American people all the time. In fact, it is exactly what obama was doing when he spoke today, when he made those comments. obama is attempting to get America to believe something that is more acceptable, even if it is not true. The same as always: “If you like your plan, you can keep your plan.”
Projection, maybe?
It is stunning that America continuously gets rolled by this jerk.

great quote … yeah, that is Obama’s routine method of operation. He acts as king with no devotion to church or state, and he treats the “body politic” as children that are fed false hope propaganda.

At times the people do act like children, but those are the ones that elect the song and dance commie. Obama voters ignore his history and believe his rainbow and unicorns stories. So he wins those people by doing interviews with green lipstick fruit loop girl.

Those that cling to their religion and guns, and their private enterprises … he despises. Obama is the child compared to the private sector small business people that he suppresses. It’s basically traditional America versus the propagandist commies of the left, as I see it.

Obama LIES about Everything – including his lies.

A pity we can’t trade Obama to Iran for two gays and a four legged ass.

They’re too savvy to trade a four-legged ass for a two-legged one. But we can try.

I’d settle for a player to be named later.

Given the consistent direction Obama’s been taking, this doesn’t come as a surprise to me.

Just as it is with a snake, Obama will do what Obama will do. It’s his nature. He couldn’t care less who he angers or why. One may as well curse the hurricane and expect it to subside.

We would do well to direct our anger towards the GOP-controlled congress which will not fight Obama and often supports him. Think about what the GOP promised is we’d just get them control of the Senate too. Think about what a pack of lies that turned out to be. Think about how GOP moderates defend this abandonment by claiming they don’t have the power to do anything.

This GOP leadership could hold the House, the Senate, AND the presidency and STILL come out powerless. They can count campaign money and side investments, though.

‘He couldn’t care less who he angers or why. ‘

well I’d argue he actually cares … he really wants to be a thorn in the side of traditional America. He cares about angering “US”, in that he really wants to anger us. He is an agitator, a community organizer that starts riots, as in Ferguson. Holder bragged about being an activist for “his people”. And Sharpton doesn’t do his thing without stirring the sheet.

They thrive on inciting.

Obama can’t stop “cutting his own throat” if his life depended on it. But psst! don’t the Teh 1 Obama!

well Henry is right, he doesn’t care about us, in one sense.

But I see it more as an Orwellian hate. He has stated he would rather see the rich punished, even if it made things worse for the lower classes. Good versus evil, liberty versus government domination.

But, but, but, Henry, we’re supposed to always vote for the R candidate because…

Newly rewritten chapter of Exodus…. Obama closes off the Red Sea and backs the Pharaoh for a return to slavery for the Israelites to force a settlement of issues related to the plagues on Egypt.

obama is like the pilot who flew his plane intentionally into a mountain
he’s doing it to US, just on a mega scale

Except he has a golden parachute, so he can bail and go be with “his people”, wherever they are.

Obama is keeping his legacy open to “creative negotiations”.

How did those embargos and sanctions ever work out, guys? This has been going on since 1979, to no avail. WHY is giving diplomacy a chance, some bit Impotent surrender to you…What ever happened to Peace on Earth good will to man? Unless you guys are strutting your manhood and wanting Bombing, Invasions, War, Dead civilians, you cannot stand the thought that maybe this might work and you would be wrong…..So WHAT if those sanctions are done up front——If YOU were Iran, would you work with a deal of Maybes? They can be put back on the same day that Iran breaches the deal…..Maybe, just Maybe this PResident and his staff knows more about this whole thing than you swaggering critics……