A historic capitulation that will explode long after Obama out of office. 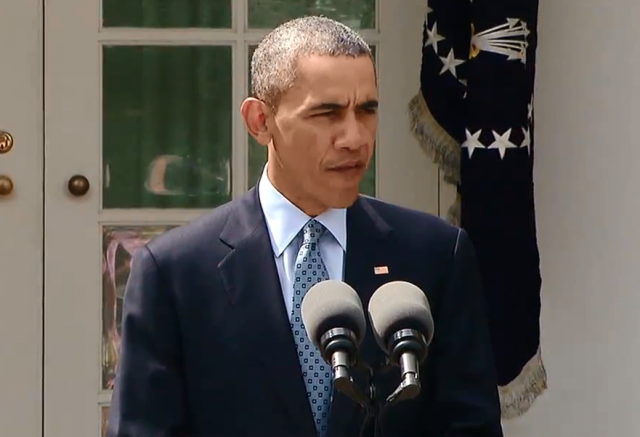 The Iran nuke Framework deal is bad for anyone other than Iran. 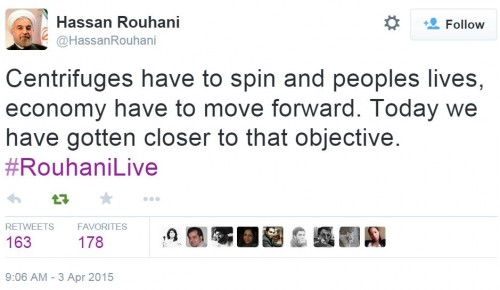 As The Washington Post editorial board points out, these parameters are contrary to the bottom line Obama spelled out at the start of the negotiations:

THE “KEY parameters” for an agreement on Iran’s nuclear program released Thursday fall well short of the goals originally set by the Obama administration. None of Iran’s nuclear facilities — including the Fordow center buried under a mountain — will be closed. Not one of the country’s 19,000 centrifuges will be dismantled. Tehran’s existing stockpile of enriched uranium will be “reduced” but not necessarily shipped out of the country. In effect, Iran’s nuclear infrastructure will remain intact, though some of it will be mothballed for 10 years. When the accord lapses, the Islamic republic will instantly become a threshold nuclear state.

That’s a long way from the standard set by President Obama in 2012 when he declared that “the deal we’ll accept” with Iran “is that they end their nuclear program” and “abide by the U.N. resolutions that have been in place.” Those resolutions call for Iran to suspend the enrichment of uranium. Instead, under the agreement announced Thursday, enrichment will continue with 5,000 centrifuges for a decade, and all restraints on it will end in 15 years.

How did Iran do it?

By setting its own negotiating red line and refusing to budge.

I’ve seen that negotiating tactic hundreds of time — it’s effective only when the opposing party is not willing to walk away from the negotiation.

Obama so desperately wanted a deal that he was not willing to walk away. The Iranians didn’t need to walk away, they just needed to dig in behind their red line and wait.

So Obama capitulated on the key insistance of Iran keeping it’s nuclear program intact, and then negotiated over the rest. Obama admitted as much in his speech after the Framework was announced:

So desperate was Obama for a deal, he agreed to keep the Fordo nuclear site open and operating in violation of prior demands, as the NY Times reports:

It was just one of hundreds of arguments between American and Iranian officials as they tried to hash out what may prove to be one of the hardest-to-negotiate arms control agreements in history. But it spoke volumes about how two countries that so deeply distrust each other managed to strike a tentative deal.

After President Obama revealed the existence of a secret, deep-underground enrichment operation near the sacred city of Qum in late 2009, the White House demanded that it be dismantled and closed. In defiance, the Iranians stuffed the facility, called Fordo, with 3,000 centrifuges — a huge issue for American and Israeli military planners because it is impervious to all but the largest bunker-buster bombs.

Iran’s supreme leader, Ayatollah Ali Khamenei, also decreed that no nuclear facilities would be closed. So when negotiations turned to Fordo’s fate, the Iranians insisted that the centrifuges had to stay and the Americans said they all had to come out.

The compromise — one of the most painful, an American official acknowledged on Thursday night — was that 1,000 centrifuges would remain. But they are to have no fissile material, the makings of a nuclear weapon.

Instead, they will spin another element, for medical isotopes. Still, the official acknowledged the optics were bad: “Having even one centrifuge in Fordo is hard.”

This sentence from The Times article sums it all up:

The Iranians knew the [March 31] deadline meant a lot to Mr. Kerry — who needed to show progress to Congress — but it meant nothing to them.

Incompetent on purpose (aka part of the plan)? Yeah, I could be convinced of that.

We opponents of the deal disdain to conceal our views and aims. We urge Congress to stop this bad deal. We urge Congress to kill it. We believe sanctions, sabotage, and the threat of military force can better constrain the Iranian regime’s nuclear weapons program than this bad deal. But we will also say openly that, if it comes to it, airstrikes to set back the Iranian nuclear weapons program are preferable to this deal that lets it go forward.
—Bill Kristol via PowerLine
http://www.powerlineblog.com/archives/2015/04/bill-kristol-kill-the-bill.php

Even the most cynical of us have got to know that if there is an American city hit by a nuke, there are not enough police in the whole of America to keep the people from ripping Deemocrats into tiny pieces.

Members of Congress, no matter how intoxicated they are with Collectivist Kool-aide, are not going to be immune, and they know it.

Kill the deal. All of it. Send a message to both Barracula and Iran. We are the flucking United States Of America, and we’ll break you.

What can Congress do? Unless enough Democrats join to override a veto, they can’t even assert authority over it. Do you think Democrats will vote against what Obama considers his legacy achievement? Really?

There is a bigger chance a Democrat would refuse to cater a gay wedding.

This is about the 5,000th time since 2014 you’ve declared congress powerless. The GOP is in control of both houses. If they are powerless it is by choice. Why do you advertise their weakness so often?

The Professor said it all about Obama, when he said “Incompetent on purpose (aka part of the plan).”

Obama and Kerry snatched defeat from the jaws of victory so …

… as Roy Scheider would say,

LukeHandCool (who is somewhat surprised that pro-Israel Jews, Christians, veterans, pundits, bloggers, etc., are not organizing a march on D.C. some weekend soon to protest this dangerous Chamberlainian madness)

Doesn’t matter what is being discussed, from a sales contract to an international treaty:

The loser of a negotiation is always the one who cannot walk away.

Walking out is the most effective negotiating tactic.

Also, only losers offer to split the difference. Whoever offers to do so, loses. Just hold your ground and they will come to you, however incrementally.

These aren’t suggestions for negotiators; they are the rules of negotiation. Too bad none of the leftist idiots involved ever heard of them.

Personally, I knew the process would not end well when I found the same negotiator who led the talks that negotiated away North Korea’s nuclear program was leading these.

One day the Iranians and their Obama will rue the day they committed this act.

Apparently, the Iranian’s existential threats and actions through proxies against not only Israel, but the post-WW II order in the Middle East, has escaped Obama’s notice. Still, his position is consistent with his other actions, including premature evacuation from Iraq, binding military rules in Afghanistan, support for far-left regime in Egypt, brutal regime change in Libya, etc.

It seems clear Obama was pushing for a path to Iranian nukes since he sent fellow traveler Ambassador Miller over to Iran in 2008. He reportedly informed Iran that future President Obama would be much more flexible, thereby short circuiting Bush talks.

Of course I don’t know what money or global powers are behind all this, but Obama has apologized for US for a long time, and Hillary has no qualms about collecting on access to power.

Hillary’s reset button with Russia seems to have opened doors for their aggressive satellite operations on several fronts. Certainly it won’t be Obama that stops Iran, even as they raise another generation under “Death to the Great Satan, America” chants. That’s only marginally worse than Obama’s church of “God Damn America”.

Obama has been waiting 6 years for this moment. It’s not Obamacare, but this Iranian deal that is going to be his legacy. This plan of his has been in the making long before he became President. It’s just extremely unfortunate that the majority of this country voted the maniac into office — twice! It is also a travesty in the extreme that John Kerry (who was so wounded in Viet Nam that he is now brain dead) is the negotiator for the United States with Iran, who insists they will annihilate us right after they wipe Israel off the face of the earth.
Congress has the power to stand against this horror show. We, the people, have a right to have Congress stand against this nightmare, or we can stand up and start moving against Washington however way we can. This has GOT to be stopped or we will die, and the world will not then be arguing about global warming; for it will be very, very hot indeed.

Well of course. Two of his “wounds” were to his ass and that’s
where he keeps his brain.

I don’t doubt what frightens the mullahs most is what Israel could do if she had a mind to do it. (And, so far she does not.)

The best response to obama is NOT to say anything at all! (Men do the same thing when women try to argue.)

Also worth noticing is that Bibi did very, very well in Israel’s recent election. But he’s not handing out portfolios. Instead he’s “playing the waiting game.” Works every time.

It is beyond plu-perfect that Kerry(who “served” 4-months in Vietnam, dont’cha know, 45-years ago)is His Infantile Majesty’s front man on this caving, cowardly catastrophe.

If I were to assert that Obama ultimately wants an Israel-free Middle East, is there a cogent argument against that assertion? His every action seems to support it.

“…is there a cogent argument against that assertion?”

Henry, I will assert, you know the answer.

His entire ME policy has been to get to this. That a few things did not quite work out (see Egypt) means only that it did not work perfectly.

It’s clear as can be to me, and has been for a long time.

Thank God we have Sammy Finkelman to show us the way.

When he went and bowed to the Saudi king I could almost imagine that he was offering to help get rid of Israel. And what better than to have Israel circled by extremists.
NO doubt he will get a reward of JANNAH!

And, irony of ironies..paradox of paradoxes… The pesky Saudis might just be showing themselves as a slalwart helpmate of Bibi’s against common enemies: Islamist Butchers of the ISIS, Yemeni, Persian variety. Who’da thunk..??!! Wahhabists bombing & straffing Israel’s Enemies!!

It will be bad for Iran, too, causing the mushrooms to sprout on their land.