(So Don’t Worry About Immigration or Education) 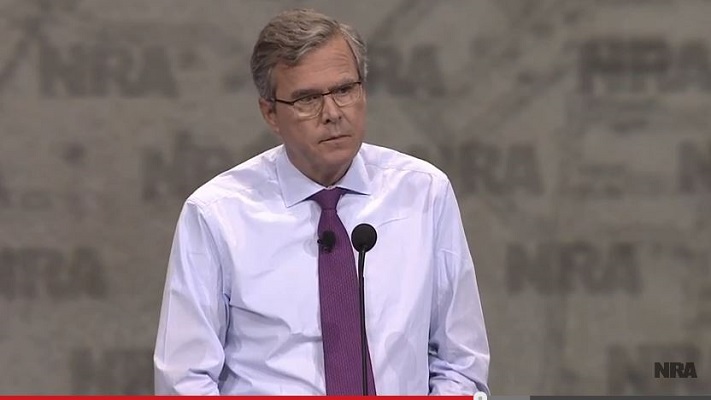 Jeb Bush has a problem.  He wants to be president, and he is apparently planning to run as a Republican; however, he’s not particularly conservative in key areas that are important to the conservative base, including immigration and education.

On the world stage, Bush sees America as “a leader among equals,” whatever that means, and he’s touchy and condescending when discussing his “grown-up immigration plan” that embraces the millions of people who’ve entered this country illegally in, what he calls, “an act of love.”  If only the babies in the room would just feel the love.  In addition to his strong stance on illegal immigration, he’s a strong and vocal proponent of Common Core, and he dismisses anyone who disagrees with him as “crazy, ignorant, and lying.”

While he’s not yet announced his candidacy, it seems clear that he intends to run in 2016, and he needs something that he can point to as a conservative stance if he has any hope of winning the GOP primary.  He’s landed on the Second Amendment as that olive branch:

The former Florida governor is confronting a conservative backlash for his positions on education and immigration. This week, he’ll turn to an issue on which he garners much higher marks from the right: guns.

Key to his appeal is the 2005 decision to sign a bill, among the most sweeping of its kind, that expanded protections for Floridians who use deadly force against home intruders or people who attack them in their cars, workplace or even on the street. The law has since become a touchstone in a broader debate about the use of deadly force, following the 2012 shooting death of Trayvon Martin, an unarmed black teenager.

Will conservative voters think this is enough?  Time will tell, but it would help him a great deal if conservatives, Republicans, and Libertarians were single-issue voters.

I have little interest in Jeb Bush’s views unless and until he is President. He is an Establishment Republican, which means that he is only sincere about repeating the DC conventional wisdom on EVERY topic. And when he gets around to saying something truly conservative it
is an insincere statement.

Jeb is better than a Democrat. That is his only positive as a candidate.

I am a NRA member and gun rights is my primary motivation. HOWEVER, I won’t vote for Bush. He is a RINO. And Hillary or Lieawatha or whomever will crush him like a bug. Why would a prog/socialist vote for a prog/socialist LITE like Bush, Christi or the other RINO’s? I want the most conservative candidate THAT CAN WIN! And Bush is not conservative and cannot WIN!

He’s not a RINO! He’s a donkey who has covered himself with a rather large elephant skin. It’s pretty wrinkled and doesn’t fit well at all. He would be more comfortable if he took it off and announced to the world that he’s an ASS.

Jeb, you didn’t build that.

Of course he signed it. What was he going to do, veto it?

It’s not like it was a controversial bill at the time. It passed unanimously, 39-0, in the Senate; and 94-20 in the House. Meaning that every single Republican, plus a majority of Democrats, supported it.

Given that kind of bipartisan popular and legislative support, even a Democrat governor would have been hard-pressed to justify vetoing it.

I admit I didn’t bother listening to the embedded 13-minute spiel… but I’m guessing he didn’t reiterate that 2012 soundbite that so enthralled the Trayvonista Left:
“Stand your ground means stand your ground. It doesn’t mean chase after somebody who’s turned their back.”
Yeah, he went there; he saw that bandwagon and he jumped right on it, and helped feed the anti-Zimmerman media narrative.

If this is the sum total of his “conservative cred”, I can’t say that I’m all that impressed. I’d still vote for him over Hillary, but not happily.

I won’t vote for Bush no matter what, but I will vote. The devil you know (lying Hillary) is safer then the devil you don’t know (lying, camouflaged Bush).

Besides we will perhaps get a few more true constitutional conservatives elected to the House and Senate to dilute her agenda.

But I am sending what little I can, as often as I can, to Ted Cruz and taking every chance I get to make favorable comments about him. And to broaden his base by saying Constitutional Conservative instead of just conservative.

Every 2016 GOP Presidential Hopeful But Bush And Christie Own Guns

We don’t want you. Your’re not going to win it. Just go away.

Hemorrhoids. Yeah…. let’s talk about something happier and more fun on this lovely spring day than Jeb Bush.

My colonoscopy video in on YouTube if you want the link.

I suspected you were deranged, but damn. What soundtrack did you choose?

Check it out and tell me if you recognize the lead guitar player:

gun rights? kinda like what Obama said during the ’08 campaign

I seem to remember that some weeks ago, before he began his campaign, Jeb Bush resigned from various corporate boards he was on to avoid any appearance of a conflict of interest.

He also resigned from the board of the Bloomberg Foundation. I seem to remember them a couple of years ago in Colorado, where they funded the campaign to destroy the Second Amendment here in Colorado during the period when we had a Democrat governor and they had control of both houses of our Legislature. We are still trying to push back after they passed a series of confiscatory laws. Apparently he anticipated needing to claim to be pro-Second Amendment, such as today.

The appropriate response to any request for money, support, or votes from him will involve the concept of unlawful carnal knowledge and self-application.

“Jeb Bush left the Florida governor’s office in January of 2007, after eight years of service. Three months later, he joined the board of a hospital company that had been pillaging government health programs and abusing patients, in Florida and around the country, for most of the years he sat in the governor’s office.”

Sorry about the mis-spelling.

He’s a crony capitalist of the worst sort. So is our current governor, also to do with healthcare companies. One of the free-market medicalists at the innovative Oklahoma Surgery Center compares him to a feral hog.

Bush courting conservatives? Since when? Within the past year he’s already said, quite nastily, that he doesn’t like Tea Party conservatives and doesn’t want their support. It was as close as a politician gets to “f**k off”.

OK, then! Not a problem!

Jeb Bush would be the natural next GOP loser after McCain and Romney. He hasn’t run for anything in 12 years. Half his positions are essentially Democrat positions. His newly found love for guns is an obvious political calculation, a meaningless badge he’ll wear for the cameras. Bush won’t survive the primaries.

However, Bush *could* be part of a pretty powerful ticket. Imagine a Bush/Christie ticket – running as Democrats.

“It’s not like it was a controversial bill at the time.”
The hell it wasn’t! The Miami Herald alone had a daily drumbeat of death and destruction if the laws was passed and signed. They stopped short of telling people to hunker down and get Hurricane-Ready when he signed it.
He is unelectable, but he did right by Florida on Gun Rights. Just because you don’t like what he represents, don’t go parsing about his record on guns for Florida

It was only “controversial” in the media. Truly “controversial” bills don’t pass both the House and the Senate with broad bipartisan support. 133 of our 153 elected legislators who voted, supported it. The media, as usual, were much storm and fury, signifying nothing. That’s why no-one sane pays them any heed anymore.

And P.S., although I disagree with your characterization of media hysteria as genuine controversy amongst the people who matter (voters & their elected legislators), I do really like your blog, and recommend others check it out 🙂

Thanks for the reminder, Amy. I hadn’t visited Miguel’s blog for too long.

Tubby lost a little weight to fool us into thinking he is not bloated.

Same as he asked his cronies to lay off donating the cash for a while, lest we realize how much he will take from us to re-pay them – not counting a probable war, Haliburton has had some lean years after all.