Taking a stand because Obama won’t 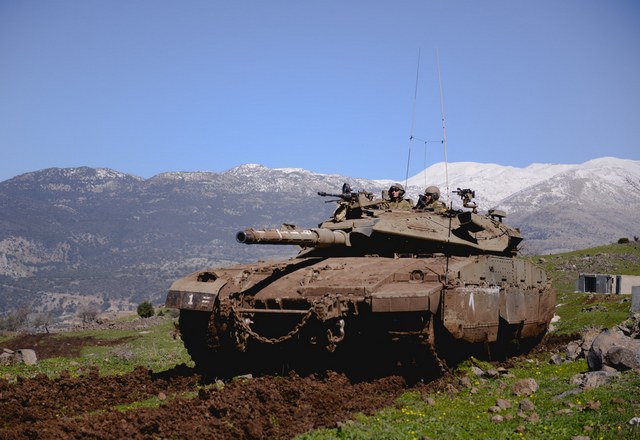 “Iran continues to try and arm Hezbollah and it is striving to arm the Lebanese terror group with advanced weapons in every way it can, and by using every avenue,” Ya’alon said in a speech at Israel’s military headquarters in Tel Aviv. “We will not allow the transfer of sophisticated weapons to terror groups, and in particular Hezbollah.”

“We know how to reach [Hezbollah] and those who direct it, at any time and any place,” Ya’alon continued. “We will not allow Hezbollah to establish a terror infrastructure on our borders with Syria, and we know how to lay our hands on anyone who threatens Israeli citizens, along our borders or even far from them.”

It wasn’t clear if Ya’alon was referring to airstrikes targeting weapons depots in Syria, attributed to Israel, that occurred Wednesday and Saturday last week, or if he was threatening future action.

Subsequent to Ya’alon’s talk it appeared that he may have intended both.

First a terror cell was discovered trying to plant a bomb at the Israel-Syria border and was killed by Israel Air Force. The Times of Israel reported:

The IDF said “a group of armed terrorists” were killed by an air force craft after they were spotted crossing into Israeli territory with an explosive device late Sunday.

IDF spokesman Col. Peter Lerner said the cell consisted of four people who were “identified while clearly laying a mine and were shot by an Israeli Air Force aircraft.”

Initial reports indicated the incident took place near the Golan Heights town of Majdal Shams, on the slopes of Mount Hermon.

Overnight, attacks were reported north of Damascus, again targeting weapons systems that could have been intended for Hezbollah.

It was the third alleged Israeli strike on the Syrian front in two days.

The reported strike in the Qalamoun mountains, northeast of Damascus — also the location of alleged Israeli sorties against Hezbollah and Assad targets on Saturday — was said to cause several casualties, though the number of dead and injured was not immediately provided.

Later reports have attributed the overnight attacks to Jihadist rebels not Israel.

After the earlier airstrikes, the infiltration may well have been expected. An Israeli airstrike against a convoy in the Syrian Golan Heights near Israel, in January, that killed senior Hezbollah operatives and Iranian officers, was followed later that month by a cross-border attack that killed two Israel soldiers.

The closer involvement of Iran with Hezbollah is likely a product of the Obama administration’s engagement with Iran. Emboldened by the rapprochement and suffering no consequences for its increased aggressiveness, Iran has been working to, in the words of Hezbollah expert Philip Smyth, “encircle” Israel.

When Israeli Prime Minister Benjamin Netanyahu sees this and hears an Iranian general say that Israel’s destruction is “non-negotiable” is it any wonder that he doesn’t trust the deal that’s being worked out?

The window of opportunity for Israel to act regarding Iranian transgressions, (including and so called nuclear deal), are drawing to a close given the fact that the Russians are going to equip Iran with advanced anti-aircraft systems.

For now, anyway, Russia said that it is not shipping those missiles so fast.

I would like to believe this, but Russia does not have historical credibility regarding their honesty.

Clinger, not speaking to Russia’s honesty but the possibility that Israel deterred Russia.

We don’t really know what kind of game is being played on diplomatic level. It seems like a stretch, but we got Russia by the balls in Ukraine, and we should be able to force concessions out of them.

In war, everything is thrust, counter-thrust.

Israel is a very innovative, capable place. Ain’t no Russian rockets gonna’ turn them round, slow them down…

Israel should also be worried about the US supplying the Lebanese military with self propelled artillery and armored vehicles.

It is so refreshing to hear a threat and know that it is not empty like the ones that obama issues. You mess with Israel and you will pay big time!

This is not new – Israel just keeps on reiterating it.