ISIS is losing ground in Iraq–but gaining in Syria

ISIS is losing ground in Iraq–but gaining in Syria

Losing in Iraq, gaining in Syria 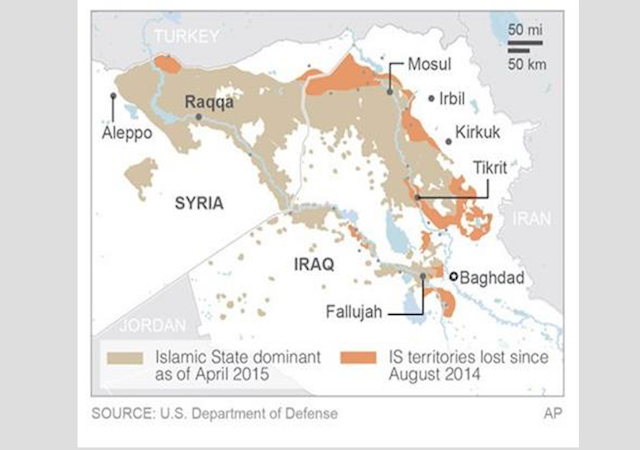 How’s the war on ISIS going? Perhaps not as badly—or as well—as you might think.

New numbers released by the Pentagon show that ISIS has lost control of almost 7000 square miles of territory in Iraq since August of last year. This is a good sign—any front line withdrawal means that we’re dealing with an enemy on defense. However, ISIS still controls some key territories in the region, including a still-contested oil refinery.

(Why is it dangerous for ISIS to maintain control of oil lands? Read my piece on the subject here: ISIS: Funded by Sex, Oil, and Crime.)

The AP explains the change in territory:

A new map released by the Pentagon shows that U.S. and coalition forces regained key territory near Tikrit, Sinjar Mountain and Mosul Dam.

U.S. administration officials have said that coalition airstrikes and the ground campaign being waged by Iraqi forces have led to the gains, particularly lately around Tikrit. But Warren said it is too early to say whether the tide of battle has turned.

Any influence is bad influence—especially in Syria. Remember, much of what we’ve seen and reported on with regards to ISIS’ most barbaric acts of war has come out of Syria. Their gaining ground in Syria means more of an opportunity to seize not just land, but the hearts and minds—via terror tactics—of the people.

Meanwhile in Lebanon, Hezbollah is busy eating itself over the continued Saudi air campaign against the Houthi in Yemen:

The Yemen campaign has already led to a bitter war of words between Lebanese politicians who support Iran and those who oppose it. The Lebanese are split along political and sectarian lines exacerbated by the 4-year-old conflict in neighboring Syria, and the harsh criticism of Saudi Arabia was likely to inflame sectarian tensions even more.

Speaking in Hezbollah’s stronghold in southern Beirut, [Sheikh Naim] Kassem suggested that the Saudi-led campaign inside Yemen would lead to problems at home.

“What is happening in Yemen today will reflect on Saudi Arabia internally,” he said, adding that the predominantly Sunni kingdom has its own domestic problems that “may cause the internal situation to implode.”

“So it would be wiser for it not to interfere in Yemen’s affairs in a negative way, but rather in a positive way, by calling for dialogue,” Kassem added. Saudi Arabia has called for a negotiated solution and has offered to mediate talks between all parties to the Yemen conflict, but it has refused an immediate halt to the air campaign.

This criticism isn’t necessarily surprising—but the strong language is. Hezbollah is notoriously careful in its criticisms of Saudi Arabia. They’re backed by the Iranians, but capitalize off of the support they garner from Lebanon’s Sunni community.

Even so, the politicians have begun to eat each other over Saudi’s pushback against Iran in Yemen, which could make for an interesting shift in alliances if the internal war continues and especially if the Houthi begin to lose ground as a result.

I’m losing track of how many strongman dictators we are going to have to install in order to bring peace in the Middle East (to replace the ones we tossed out).

Egypt (well, they put in their own strong man so they’re all good); Libya; Afghanistan; Iraq; Yemen; Somalia; Lebanon;

We are talking an awful lot of colonization here.