Is the Democrats’ latest marketing attempt scandalicious or misunderstood?

Is the Democrats’ latest marketing attempt scandalicious or misunderstood? 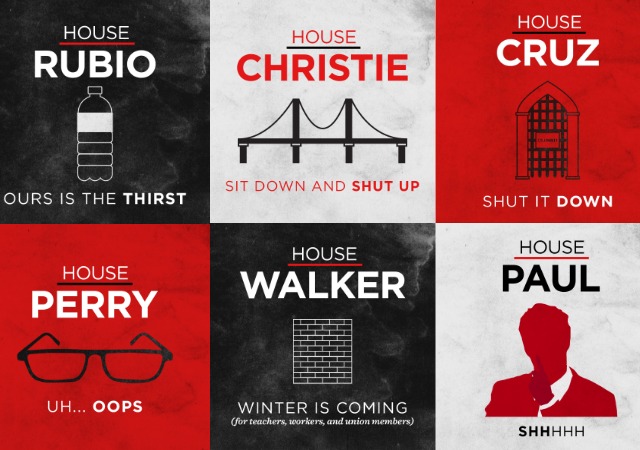 These Republicans can’t hide from who they are — but when they play the Game of Votes, they'll either say or do anything to win.

A total of eight graphics were posted on both Facebook and Twitter. Each graphic was meant to be jab at a Republican presidential hopeful. 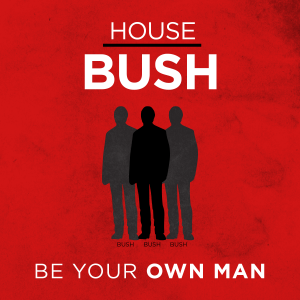 We have no idea what this is supposed to mean. 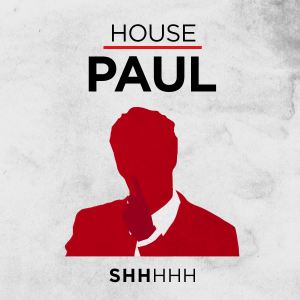 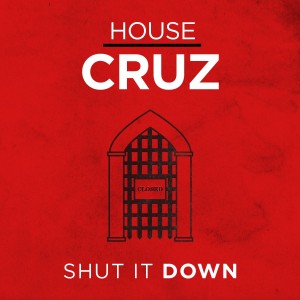 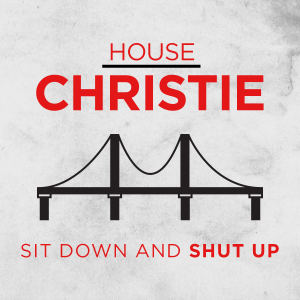 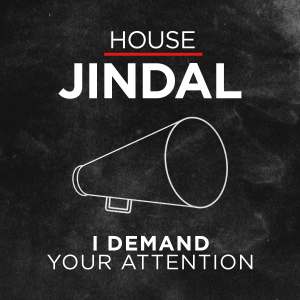 Giggled at this one and would totally wear the t-shirt. 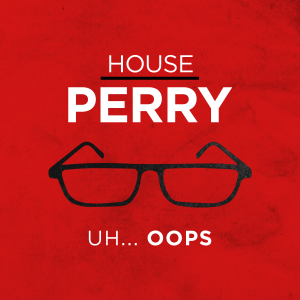 Admittedly, when I saw the first few graphics, I was a little puzzled as to why each graphic said ‘House.’ And then I got to the Walker graphic and it was abundantly clear: 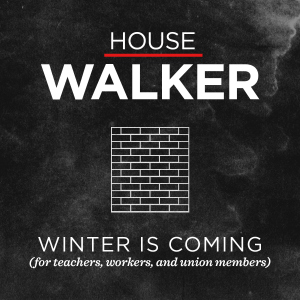 Also debuting April 12? The “Game of Thrones” season premier. The HBO hit series identifies the various families vying for the iron throne as House _______. The graphics were well timed memes of the popular series. Clever, really.

The eighth graphic taking a stab at Senator Rubio ruffled a few feathers though.

From the DNC, Dems want their "House Rubio" to fetch them bottled water. Not surprised by the Party of Jim Crow. pic.twitter.com/qFDvrUDv5D

Social media was rife with outrage over the allegedly racist graphic. Whether offended parties missed the “Game of Thrones” reference is unclear.

But for this particular offense, we have to plant our flag in the ‘Let’s Save Our Outrage for Something Truly Outrageworthy’ camp. There’s certainly plenty to be upset about when it comes to the Democratic Party, but a poorly constructed social media campaign seems a waste of precious energy.

Lacking substantive points/positions/arguments, the Dems revert to what they do best: throw stones at class(-warfare) houses

That’s okay, it is only good we do a sigil for Hillary Clinton…

I am sure we can come up with way better ones than I did for Hillary, Lizzy, and the rest of the Democrat clown car crew.

They’re mindlessly stupid, so they play to their low-information base. Just like the losers in the audience at The Daily Show or on Maher, just mentioning these phrases generate knowing nods and giggles, despite being essentially meaningless, false, or inane. It certainly won’t win converts, but it will encourage the party faithful (as if that’s necessary). I’m glad I wasn’t the only one who didn’t get the Jindal or Paul graphics.

Gotta keep those “No Information” voters in a stupor.

How about a meme for Clinton. Deleting emails is good for the environment

I’m not sure it’s wise for Clinton to evoke messages like “Winter is Coming” considering her advanced decrepitude.

Agreed. They’re just Fluking around for a fix.

How about a graphic that “shows” a toilet with words something like: “Hillary, Wholly ” referencing the inventor of that now famous, and useful, device!

“Hillary Clinton—More strokes than the Masters”

I see no reason to exempt the dhimmicrats from the same tactics they use.

This is, of course, directed at kids who have just gotten old enough to vote, and while they tend to be a bit indoctrinated, they are not stupid.

Take this ad campaign for the joke it is, and have fun with it.

The Democrats are always surprised to find out that grownups have a sense of humor, too. That is because they believe the lies they tell themselves, to demonize the opposition.

So, answer back, with humor.

I mean, really: do we want the kind of disastrous government of Game of Thrones? 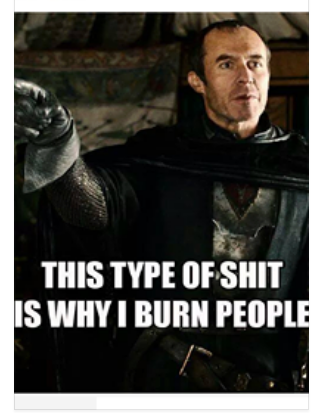 House Hillary. “What is deleted may never be seen!”

“What bothers me about race relations in this country is that Democrats have been obsessed with controlling black people for the last 175 years but 9 out of 10 (indoctrinated) black folks would swear it’s the other way around ….. God help us all!

Democrats supported and passed the Missouri Compromise to protect slavery.

Democrat Senator Robert Byrd of West Virginia, was a well-known and proud and accomplished “Kleagle” in the Ku Klux Klan.

Democrat Senator Robert Byrd of West Virginia, personally filibustered the Civil Rights Act of 1964 for 14 straight hours to keep it from passage ….. other staunch opponents and uber-racist/disgraceful participants included Sam Ervin, Albert Gore, Sr.,and none other than LBJ and JFK.

Democrats declared that they would rather vote for a “yellow dog” than vote for a Republican, because the Republican Party was known as the party for blacks.

Democrat President Franklin D. Roosevelt’s choice for vice president in 1944 was Harry Truman, who had joined the Ku Klux Klan in Kansas City in 1922.

Democrat Governor George Wallace stood in front of the Alabama schoolhouse in 1963, declaring there would be segregation forever.

Lincoln and King were murdered by Democrats.

June 24, 1940
Republican Party platform calls for integration of the armed forces; for the balance of his terms in office, FDR refuses to order it

March 12, 1956
Ninety-seven Democrats in Congress condemn Supreme Court’s decision in Brown v. Board of Education, and pledge to continue segregation

June 5, 1956
Republican federal judge Frank Johnson rules in favor of Rosa Parks in decision striking down “blacks in the back of the bus” law

May 2, 1963
Republicans condemn Democrat sheriff of Birmingham, AL for arresting over 2,000 African-American schoolchildren marching for their civil rights

June 10, 1964
Senate Minority Leader Everett Dirksen (R-IL) criticizes Democrat filibuster against 1964 Civil Rights Act, calls on Democrats to stop opposing racial equality. The Civil Rights Act of 1964 was introduced and approved by a staggering majority of Republicans in the Senate. The Act was opposed by most southern Democrat senators, several of whom were proud segregationists—one of them being Al Gore Sr. Democrat President Lyndon B. Johnson relied on Illinois Senator Everett Dirksen, the Republican leader from Illinois, to get the Act passed.

“I think one man is just as good as another so long as he’s not a ni**er or a Chinaman. Uncle Will says that the Lord made a White man from dust, a ni**er from mud, then He threw up what was left and it came down a Chinaman. He does hate Chinese and Japs. So do I. It is race prejudice, I guess. But I am strongly of the opinion Negroes ought to be in Africa, Yellow men in Asia and White men in Europe and America.”

-Democrat Harry Truman (1911) in a letter to his future wife Bess
——————————————————————————————
“I am a former Kleagle of the Ku Klux Klan in Raleigh County and the adjoining counties of the state …. The Klan is needed today as never before and I am anxious to see its rebirth here in West Virginia …. It is necessary that the order be promoted immediately and in every state of the Union. Will you please inform me as to the possibilities of rebuilding the Klan in the Realm of W. Va …. I hope that you will find it convenient to answer my letter in regards to future possibilities.”

— Former Klansman and US Senator (D) Robert Byrd (1946)
—————————————————————————————–
“These laws [segregation] are still constitutional and I promise you that until they are removed from the ordinance books of Birmingham and the statute books of Alabama, they will be enforced in Birmingham to the utmost of my ability and by all lawful means.”

I read that Truman didn’t join the KKK because they were also against Catholics, who had been under his command during Word War I.

Did he join in and then quickly drop out, or drop when it became apparent they were anti-Catholic?

Truman did come from a family that had sided with the Confederacy during the Civil War. Woodrow Wilson as a small boy lived in Georgia when Sherman was marching though it, and his ideas on race were Southern, modified by being a little intellectual.

Very impressive list, Clinger. But didn’t you know – the parties “switched” so that those that were once Democrats (the KKK version) are now Republicans and vice versa. /sarc, if necessary/

Can someone explain the Rubio graphic? Is it a House of Thrones reference? If so, I don’ watch so I’m not familiar with it.

As a GoT fan, let me see if I can explain: Each of the great houses of the fantasy kingdom have an icon (e.g., Lion) and a motto (Lannisters always pay their debts). So, using this template, the Dems are reminding everyone of the memorable act of Rubio’s drinking so much water during his GOP Response to Obama’s otherwise quite forgettable State of the Union address.

Though it’s sort of a running joke in the books that “a Lannister always pays his debts” is better known than their real words.

Clintack: Pleased to meet an ever GoT geek than me. 😀

Thank you, Leslie. Why would that be considered racist? I mean, I’m all for bashing the Left, but I don’t get the racism angle that people are complaining about.

Proof? I don’t believe you are correct, which would throw your entire list into question. (yes I recognize many which are correct)

Maybe Hillary should be HER OWN MAN and shut up and sit down in the EMPTY CHAIR of Obama behind her own WALLED up server in her SECOND HOME.

OR maybe she could STAND BY HER MAN and bake some cookies. Maybe someone ought to waive a $100 bill and see who shows up.

but WHAT DIFFERENCE DOES IT MAKE after killing the ambassador and then arresting a VIDEO MAKER.

And so the GOP response begins: 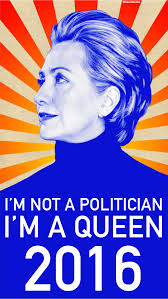 The Red Queen? Wasn’t that her in Alice in Wonderland?

So that’s were all those emails went.

Re: the Rubio graphic, it undoubtedly refers to MR’s notorious drinking of water during the 2013 State of the Union response https://www.youtube.com/watch?v=dWkjVvoXIS0 This sort of thing looms large in Dem brains.