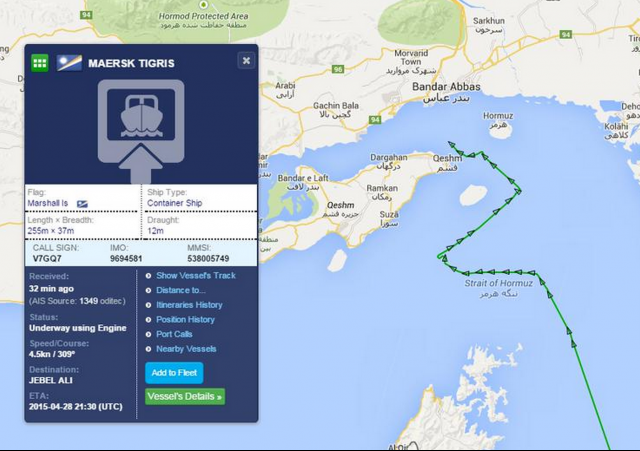 Earlier this morning, Al Arabiya reported Iranians boarded a U.S. ship. That report quickly changed to, “Iran has opened fire at a U.S. cargo ship and directed it to Bandar Abbas port on the southern coast of Iran.”

The BBC, Reuters, and the Telegraph picked up the story, regurgitating Al Arabiya’s scoop.

So what really happened? While the story is still developing, here’s what we know thus far:

The ship was not a U.S. cargo ship.

U.S. official says that a cargo ship seized by Iran is not a US-flagged cargo ship.

The cargo vessel is part of the Maersk line.

U.S. Official tells @ABC the cargo ship seized by Iranian vessel belongs to Maersk line. Not sure if there are American mariners aboard.

According to the Pentagon, no Americans were on board. The State Department confirmed.

Pentagon: Maersk Tigris was there during a transit of Strait of Hormuz. There were no Americans on board the vessel and no one was injured.

This is a Maersk owned commercial vessel flagged to Marshall Islands. NO AMERICANS believed on board: State Department official tells @abc

Though it appears Iran did in fact fire warning shots; a move Pentagon spokesman Col. Steve Warren said it was “inappropriate,” according to CNN.

Not a U.S. ship, no Americans, end of story, right? Maybe not…

The Compact of Free Association with the United States gives the US sole responsibility for international defence of the Marshall Islands.

And the whole, “Maersk ship was in Iranian waters” thing?

Maersk Tigris was clearly in international waters and diverted by Iranian navy pic.twitter.com/3hVbLy0KlG

USA Today reports the ship was in Iranian waters, saying, “although the Maersk Tigris was in Iranian waters, Warren said ships regularly transit the narrow strait without incident under the recognized authority of “innocent passage.”” The New York Times says the vessel wasn’t up to anything out of the ordinary as it was, “traveling through the Strait of Hormuz in the Persian Gulf on what the official called “an internationally recognized maritime route.””

But why this ship? CNN reports:

The M/V Maersk Tigris was seized at the request of Iran’s Ports and Maritime Organization (IPMO), Iran’s semi-official FARS is reporting, citing informed sources. The Marshall Islands-flagged vessel was seized after a relevant court order was issued according to the source, indicating that the IPMO had monetary differences with the ship owner.

The closest U.S. warship was more than 60 miles from the scene when the incident began.

And according to Reuters, the Pentagon is viewing the actions as intentional provocation, “Iran’s Tasnim news agency quoted an unidentified source who sought to play down the incident, saying it was a civil matter with no military or political dimension. But the Pentagon described it as an apparent provocation.”

A big 1 / MT @JohnAllenGay Maersk Tigris was heading from KSA to UAE, flagged to a US protectorate (Marshalls). Iran is sending a message.

It'd have been stupid to seize a US-flagged vessel. Marshall Islands was brilliant: kinda US, kinda not US…ambiguous but sends the message.

In fairness, Iranians probably looked up Marshall Islands flag, played the nat’l anthem on loudspeaker, and figured “Pretty much America."

As it turns out, Iran played the same maritime bully game Friday of last week, but with an American ship. Of course we’re only now hearing about it, thanks to their stunt this morning. CNN reports:

A U.S.-flagged ship was recently intercepted by an Iran Revolutionary Guard naval patrol, the U.S. Navy revealed to CNN Tuesday.

The incident occurred on Friday when four Iranian naval vessels surrounded the U.S.-flagged Maersk Kensington in the Strait of Hormuz.

The episode came ahead of an encounter Tuesday in which Iran Revolutionary Guard patrol boats fired shots at a commercial cargo ship and then intercepted the vessel, the Marshall Islands-flagged M/V Maersk Tigris, which was also crossing the Strait of Hormuz.

A senior U.S. military official told CNN that “the Iranians encircled the Kensington and followed the ship on its course for a period of time before withdrawing and breaking away.” After that, the U.S. Navy Fifth Fleet issued a notice to mariners about the incident.

.@CBSDavidMartin "Pentagon lawyers have determined..US has no obligation to come to the defense of a Marshall Islands-flagged vessel at sea"

The only question now is how Obama is going to blame Bush.

The only question now is when will 0bama bow and apologize.

Are the Democrats providing us another U.S.S. Pueblo Moment?

What in the hell is Obama doing? The Iranian regime punked him by disputing his “fact sheet” outline of their nuclear “agreement” mere hours after it’s release. Then their leaders were shown on video leading chants of “death the America.” Then they reiterated their desire to “wipe Israel off the map.” Then we hear the Soviets are selling them weaponry. And now this. We should be clamping down with even more severe sanctions and threatening military action, not rolling over and showing our bellies like our “president” Obama is doing. What a pansy.

Maersk will pay the pirate’s ransom as a usual cost of doing business in that part of the world and life will go on. That a nation is involved in the piracy won’t excite anybody in DC. Can’t offend the Iranians, doncha know. Fifth Fleet’s reaction to a distress call was proper, but they’ll be told to stand down soon enough. Val loves to give stand down orders. This probably doesn’t even make it onto Obama’s daily briefing, unless it first appears as a crawler somewhere on ESPN.

Just wait it is going to get worse. When you don’t confront a bully then they get bolder.

From what I understand, the ship itself is owned by a Rickmers Group based in Germany. It is on long term lease to Maersk Group, which is Danish. It is flagged under the Marshall Islands, which while it is a US protectorate and under the Terms of Association we are responsible for its defense; is it defense of its geographic territory, or are all places under its flag [ships, diplomatic missions, trade missions, etc.] our responsibility?

but then again they are known for the facility of their lies to the American people.

The actual Treaty of Free Association is here:

Based on a reading that defines the word “cursory”:

Section 311 of Title III Article One [page 32] makes the US responsible for the defense of the “Republic of the Marshall Islands and its people from attack or threats thereof as the United States and its citizens are defended”.

Article VI [Definition of terms, page 43] specifically defines “Republic of the Marshall Islands” “are used in the geographic sense and include the land and water areas to the outer limits of the territorial sea and the airspace above such areas as now or hereafter recognized by the Government of the United States”.

If there are no US or Marshall Islands nationals aboard, we may well not be responsible for that ship.

I would also note in passing that Article II Section 121 [Foreign Affairs, page 5] gives full foreign power capacity to the Republic of Marshall Islands specifically listing the Law of the Sea as being their purview.

And this is the hook that Obama will use to back down with.

Professor, does this make sense, or am I spitting to windward?

Very interesting, but irrelevant. Treaties are the law of the land. First, our President doesn’t care about the law. Second, ask the Ukrainians about the President honoring defense commitments. My recollection is Ukraine’s territorial integrity was guaranteed in return for giving up their nukes.

Thank you for asking that question;
I came here specifically ask it myself, but you beat me to it and did a fine job of it.
My opinion is that we should have sent a fighter bomber and shot the flagpole off of the Iranian Vessel.

That provides a pretty deep look at how this is REALLY ill-timed for Barracula.

Of course it’s a provocation. That’s what despots do when confronted with what Lenin described as “mush.”

President Mush won’t do anything, we know that much.

Marshal William T. O’Neil: I’d like a report of all these incidents that have happened in last six months. I’d like it really soon. Or I might just kick your nasty ass all over this room. That’s a marshal joke.

So this leaves the question: Is Iran really going to get serious-stupid about screwing around in the the straits, or are they just being a–holes?

My money is on the second. Despite all of the US military cuts, if Iran goes full-stupid, they’re going to get a high-explosive massage all along the coast.