Iran gets the nuke deal it wanted

Iran gets the nuke deal it wanted 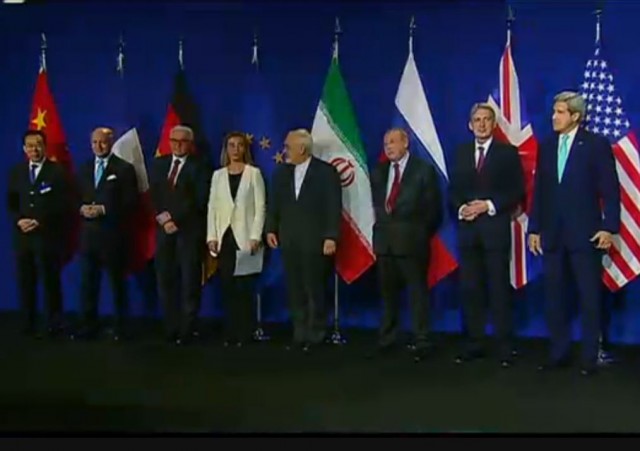 A vague agreement to agree was just announced. The precise details are somewhat vague, as it’s just a statement of point, but one thing is clear: Iran is thrilled.

Zarif says Iran has agreed to take steps "for a period of time," which seems to confirm sunset clause…big Western concession.

Tellingly, the Iranian Foreign Minister was quick to talk and hold a separate news conference afterwards. 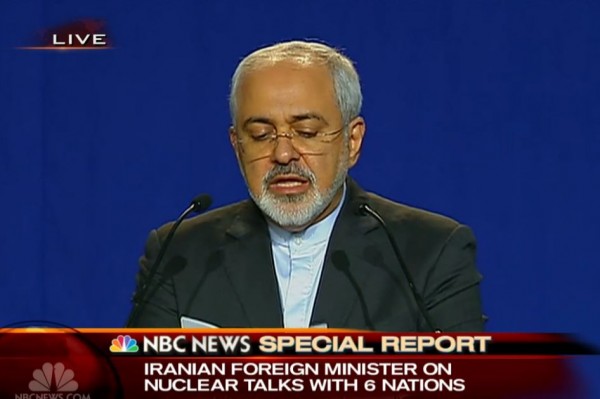 Iranian FM sums up "deal" – "We'll continue enriching, we won't close any facilities…all UN and US sanctions will be terminated."

#IranTalksLausanne: 6 powers agree to lift all #EU, #US & #UN Security Council sanctions against #Iran right at once. #IranTalks #IranDeal 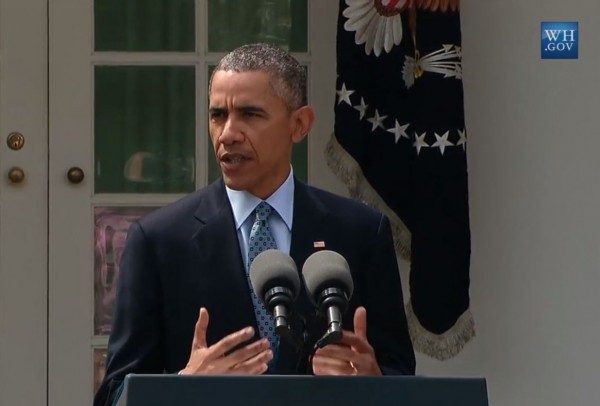 Seriously, the devil is in the final details and all we currently get is half baked 'framework' and fully baked spin

Obama: "If Iran cheats, the world will know it" – and do *cough cough North Korea cough cough* what?

Obama to Bibi: “This is the best option"

Obama in a nutshell: my deal – or war (and no one wants war…)

Obama: If Congress kills this deal…then it is the U.S. that will be blamed for the failure of diplomacy

He could have said it in French.

I hereby dub this useless ‘agreement’ with the name of Schrödinger’s Treaty. The administration will claim that it is a great leap forward to eliminating the nuclear threat in the Middle East, and Iran will claim that it’s full permission for them to make as many nukes as they want. And of course, the actual text will be as vague as school pudding.

On its face – this looks like a reasonable deal. It slows the development of enriched uranium and extends the breakout time (time after the treaty lapses or is repudiated until a bomb is made) from 3 months to 9-12 months.

If Iran was a trustworthy party – this would not be a bad agreement – because it kicks the nuclear can 11 years down the road. But – even 11 years from now – the Iranians could legally have uranium for 100 bombs under this agreement.

The US MUST begin preparing for a regional nuclear war in the Middle East. We MUST deploy anti-missile systems against Iran. We MUST finish the KEYSTONE Pipeline.

Because.. it is coming. Get ready.

Obama’s Concession Stand Blues: “If it wasn’t for bad deals I wouldn’t have no deals at all.”

This will become a gold record and placed into his presidential library on Maxwell St.

I wonder if it has every even slightly entered his self-absorbed mind that he may have just killed his daughters?

Obama can’t think beyond the current par 3 hole. The next ‘hole’ will be all down hill.

But the latter case has a much larger chance of actually happening now.

If radical Eskimos threatening to annihilate Canada insisted upon being able to operate centrifuges for the stated peaceful purpose of operating nuclear-powered freezers, would the “international community”

‘Global Warming’ is a hoax/lie/myth concocted by globalists to levy a global carbon tax. It is a sinister scam.

… would the international community say, “Sure, why not?”

Rags, with this type there always has to be theater.

Unfortunately, the grand finale will be in the shape of numerous mushroom-clouds.

Obama: We’re going to inspect every step. The world will know if they cheat.

And the world knowing Iran cheats isn’t going to stop Iran from cheating.

Suppose you do know when they cheat.

What do you do then? What is the exit strategy from the agreement?

You need to be more careful with a peace agreement than with a decision to go to war.

The U.S. Constitution provides that a 2/3 majority of the senate is needed for a peace agreement, but only a majority(albeit of both houses) to declare war.

1. Are the sanctions supposed to be lifted before all the details of the agreement are worked out?

2. What if the details are NOT worked out?

3. The State Department says Iran is now 2-3 months away from a bomb (break-out) That sounds like about the time till the agreement is to be finalized.

4. What happens if Iran starts violating the agreement, before it’s signed, or three months after it is signed?

Hey now, details aren’t important. It’s just important that there is a deal, and that Obama is the savior of the world due to his expertise in foreign relations and peace negotiations.

An idea to suspend certain United Nations sanctions temporarily but to arrange for them to automatically “snap back” into place if Iran does not fulfill its commitments under a nuclear accord has also prompted concerns from Russia that such a procedure might dilute the authority of its Security Council veto power.

Uhhh, yes, Russia must be having instant flashbacks to the second Gulf War, when the Bush administration laughed in Russia and France’s face and used an old resolution to wave around “The Security Council supports us” and launch its invasion without a new debate. I try not to argue that the US was wrong to do so – I mean, we’re talking about Russia and France for god sakes, not exactly countries with clean hands – but Russia’s paranoid, not crazy, and it has good reason to think that the US will treat Russia like it already treats the US Congress. Why not?

Transforming the world “black messiah style”, 0bama heads out to the links to celebrate.

KERRY: “Whoa! Wait, wait, wait! I’m not asking for anything anymore, but for the sake of Allah at least let us pretend we’re negotiating a deal!”

IRAN: “Infidel scum, you have given us everything except a reason give a sh*t about your optics problem. F**k off or I shall taunt you a second time.” (Giggles from Iran’s side of the table).

KERRY: “Fine! I get it, I get it! How about you continue to pretend we’re negotiating and we’ll get all the sanctions lifted? How’s about that, friendo? By the way, I served in Viet Nam, you know.”

IRAN: “Well. Okay. We take that deal. Maybe. Who knows? Meeting over. Now f**k off you flea-ridden, infidel, American scum!”

OBAMA: “So, you get my legacy agreement or what?”

Kerry: “Indeed, Mr. President. The current details are that…”

OBAMA: “F**k the details. Who cares? You got a deal, an agreement, an understanding of some sort, RIGHT?”

The proposal and action (via proxies) upon existential threats has engendered a close bond between Obama and left-wing regimes. He is notoriously intolerant of right-wing, secular governance, and has demonstrated his impatience through proactive regimes changes. Perhaps an inherited dream from his pro-Caliphate father’s tribe and left-wing mother.

So…..”solutions” have been agreed upon?

I fear that they have.

I presume there is one in particular that Iran lusts after:

I want to throw up.

I wonder how this would have turned out if Americans had been negotiating for US?

Which should be the first clue that it is not something that we should agree to.

Now he is “presenting” it to congress, lol. Translation, he is now going to set up to be able to blame republicans by presenting them with a deal that he knows full well they will never agree to.

I like Bibi’s statement; “PM Netanyahu to Pres Obama: A deal based on this framework would threaten the survival of Israel. #IranTalks

I know Obama isn’t smart enough to see that as the warning that it is, but I hope someone in the administration is smart enough to explain it to him. Bibi dosen’t make statements about the survival of Israel lightly.

Look for the administration to try to get this whole process off the news, letting it die an unnatural death between now and June. Alternately, as parodied in an above post, the Obama admin may seek to have Iran at least pretend negotiations are being seriously conducted, at least until November 2016. All as an acknowledgement this is no legacy event for Obama and the need to slip out from underneath the growing ridicule for refusing to admit defeat.