“I’m not here to answer your questions, I’m here to try to get answers to mine.” 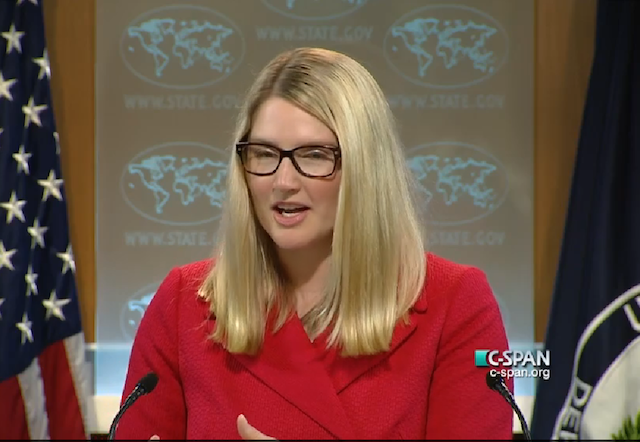 We here at Legal Insurrection have a special love/hate relationship with the C-SPAN soundbite catalog that populates after every State Department press briefing. Yesterday’s meeting with the pool was eventful to say the least.

No, not eventful. It. was. awkward:

One reporter asked Harf how the department could curb Iranian influence in the Middle East without directly engaging Iran.

“I agree with you that it’s a challenge,” Harf told the reporter, who replied, “I never said it was a challenge.”

“You don’t think it’s a challenge?” Harf shot back.

“I’m not here to answer your questions, I’m here to try to get answers to mine,” the reporter said, then asked his question very slowly.

Newsmax posted some pretty comprehensive coverage of the entire press conference, with two more videos showing Harf coming undone under pressure from the pool. (I especially like the part where Harf gets caught in a lie after insisting that Iran would not be able to access millions of dollars in frozen assets once a nuclear deal is signed.)

Pointing out these types of exchanges is important—and not just for the purpose of embarrassing Marie Harf. There is a mile of distance between taking tough questions from the press pool, and taking abuse from the press pool. This was not abuse, yet Harf treated it as such.

This is a problem.

Right now, the State Department is acting the way a teenager acts when he has been caught in a lie: flustered, short, and in a hurry to deflect and move on. For an administration that claims to be concerned with transparency, they seem to take great issue with being asked to explain the important ends and outs of what Barack Obama is trying to do in the Middle East. Right now, the press has printed all they can print on the Iran “framework” based on the bullet points coming from State and the White House; they want to dig deeper, but for some reason (gee, I wonder why) State doesn’t feel the need to provide them with the information or explanations they need to do so.

It looks like Harf isn’t going to get away with telling her press pool that the issues she’s tasked with presenting are simply too complex to be discussed in a briefing. How refreshing…or something.

As for real pushback? I’ll believe it when I see the fruits of their frustration in black and white, where it belongs.

I hope we can survive this monkey show for its remainder.

And I’m the cock-eyed optimist ’round here…

we can. the bigger question is can we survive an electorate that repeatedly elected them? This is the bigger question as it, IMO, shows a tend and its not a trend thats ever added to the longevity of a nation state.
looks towards the european union for your answer where people have perfected the art of voting themselves an easy life.
I have many concerns about our viability in the next 25-50 years.

“First of all, it’s not about working or not working…”

That says it all about Obaman foreign policy towards Iran.

Well, and every OTHER bit of Collectivist policy and theory.

It doesn’t matter that it doesn’t EVER work! It matters that it’s PURE.

That’s the modern equivalent of speaking in tongues, I imagine?

She is not as stupid as she sounds. What we are seeing is the effect of cognitive dissonance on a person who still has some shreds of integrity. She is being told to say things that simply do not fit together in her mind, given what else she knows.

I think you give her too much credit.

To me, she seems as fake as they come, from the nerdy glasses all the way down to the nonsense that comes out of her mouth.

But I agree, about the “You don’t it’s a challenge?” question being an obvious sign of cognitive dissonance.

Not being a challenger could mean either thzt it’s impossible, or that some other peeople other than the current administration would know how to do it.

The reporter was not taking a position on whether it was easy, or hard, or impossible to do, but just asking how did the the Administration propose to both curb Iranian influence in the Middle East and not directly engage Iran (in combat, I presume.)

The answer was: I admit it might be difficult, but that’s what we’re going to try to do anyway. (A “challenge” means it can be done)

You know, agreeing with something someone never said is underhanded verbal aggression. It’s extremely condescending, a conscious exertion of control over the other person.

What made me laugh out loud is how the reporter said his question “slowly” – surely, surely that will be condemned as open sexism, yes? Though after how manipulative she tried to be (just badly) she of course deserved it.

Whether this is the case or not, yours is a very perceptive comment.

What really worries me is NOT that this lady is making a fool of herself for the whole world to see.

Perhaps the next President should fire every Presidential appointee – all 3,500 of them – and refuse to name replacements.

I doubt we’d be any worse off than we are now.

I’m reminded of the sea lions of my California childhood.

They spoke the same language.

Is this a Saturday Night Live routine?

Or was Barf told by President Jarrett that Barf will be made a junior Reichsfuhrer after martial law?

There’s our tax dollars at work…

Embarrassed? She wants to me the next Stephanopoulos. One hand washing the other.

I think there’s a reason these spokesfolks keep getting younger and younger. Only naive ambition accepts because the experiences pros know better. They’re also getiing, um, femaler. I suspect that’s to make male reporters stay nonaggressive, in other words, muzzled by PC fears.

That’s one of the replies that should have been made to Hillary.

“What difference at this point does it make?”

Replies that should have been made:
Some of us believe it does make a difference. We don’t really care if you do or not.
We are not here to answer your questions, you are here to answer ours.