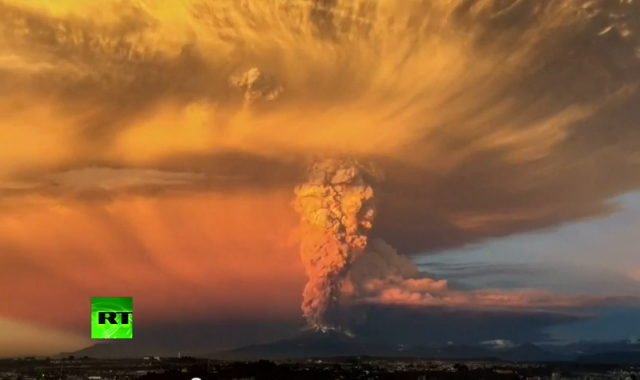 While environmental activists around the world were celebrating Earth Day by racing around in private jets, our planet responded…by unleashing thousands of cubic feet of greenhouse gases.

An ash cloud from the Calbuco volcano in southern Chile that erupted unexpectedly on Wednesday was blowing into Chile and Argentina on Thursday, forcing the cancellation of flights from nearby cities in both countries and blanketing residents in ash.

The volcano, which last had a major eruption in 1961, has belched a spectacular plume of ash and smoke around 15 kilometers (9 miles) into the sky near the popular tourist town of Puerto Varas, some 1,000 kilometers (625 miles) south of Santiago.

Calbuco erupted twice over the last 24 hours and has now paused, but it remains unstable and could erupt again, experts said.

Winds have already carried part of the ash cloud to the city of Chillan, some 400 kilometers south of Santiago, and could reach the capital by the end of the day, said government meteorologist Arnoldo Zuniga.

The well-time volcanic display is not unexpected, as Chile is one of the leading members of the Pacific “Ring of Fire.” Chile has a chain of about 2,000 volcanoes that are peppered across the vast Andes mountain range, forming the second largest volcano chain in the world after Indonesia.

Calbuco dumped thousands of tons of carbon dioxide, methane, and other climate impacting gases into the atmosphere. In an attempt to put volcanic impact on climate into sensible perspective after Iceland’s most recent eruptions, The Australian published “Vitriolic climate in academic hothouse,” by Dr. Ian Plimer, a volcano expert and professor of geology at the University of Adelaide:

…The original source of atmospheric CO2 is volcanoes. The Earth’s early atmosphere had a thousand times the CO2 of today’s atmosphere. This CO2 was recycled through rocks, life and the oceans.

Through time, this CO2 has been sequestered into plants, coal, petroleum, minerals and carbonate rocks, resulting in a decrease in atmospheric CO2.

Deeper in Earth, there are huge volumes of CO2 yet to be leaked into the atmosphere. So depleted is the atmosphere in CO2, that horticulturalists pump warm CO2 into glasshouses to accelerate plant growth.

In a video lecture at the Institute of Geology and Geophysics at the University of Adelaide, Plimer notes that man’s contribution of CO2, SO2, and other greenhouse gases is relatively minor, when compared to the contributions from natural sources.

Calbuco’s emissions also dwarfed the emissions of Air Force One, when the President few to the Everglades for an Earth Day event and burned though 9,180 gallons of evil oil. Obama also burned through a significant amount of taxpayer dollars for a questionably necessary event, as it costs over $200,000/hour to fly Air Force One.

Bill Nye, the Science Guy, was not available for comment.

Heading down to DC to catch an #EarthDay flight on Air Force One tomorrow with the President. We’re going to #ActOnClimate.

I’m pretty sure The Movement doesn’t count naturally released greenhouse gases because Gaia has willed it, not man.

Maybe he should change his name to Bill De Nye since he is hangs out with Democratic royalty on Earth Day.

We should see a warming trend directly attributable to this massive release of CO2.

Right? This is a question I’ve been posing for decades.

And hypocrisy is Nye. (See what I did there?)

We all would have been better served if Obama had taken his self-anointed abilities as in “His/Obama’s promise to slow the rise of the oceans and to heal the planet” and applied it to those things only our creator and he have oversight on. Apparently GOD does not buy into his Climate Control and EPA policies either.

Oh, and I heard on the radiator today that the SUPER-volcano that is Yellowstone is WAY bigger than previously thought.

Makes you wanna say…Ullp. When that thing pops, all bets are off.

When volcanoes erupt, it doesn’t heat the planet, it cools it.

Effects of the Tambora Eruption ..

…So much material was in this cloud that it lowered temperatures around the globe and produced blizzards in the Midwest and snowfall in the U.S. east coast and London in August, caused poor harvests in New England and Europe, and killed water buffalo and flooded rice crops in China and Tibet in what became known as the year without summer. One Virginia resident wrote. “In June…another snowfall came and folks went sleighing…On July 4, water froze in cisterns and snow fell again, with Independence Day celebrants moving inside churches where hearth fires warmed things a mite.”

Among other things the volcano is believed to have produced the appalling weather that disrupted Napoleon at Waterloo and caused crop failures and famines that lead to social unrest throughout Europe. The gloomy weather inspired Byron’s poem Darkness and is believed to have had a hand in creating the characters Dr. Frankenstein and the monster by Bryon’s friend Mary Shelley….

….So much ash was thrust into the stratosphere the color of the sun turned green and temperatures around the globe dropped several degrees, producing blizzards in the midwestern United States in July. On the positive side, brilliant sunsets lingered for years all around the world. ….

…Pinatubo caused world temperature to drop about a half a degree. Scientists, measuring the depth of the cloud by satellite observation, calculate that 2 percent of the incoming sunlight was deflected from the earth by the layer of sulfate aerosol….

That’s two more things they have failed to adequately model: clouds and aerosols. While we may understand the physics in principle, we cannot estimate their effect even with an ensemble of supercomputers and hypotheses.

One. In geological time, particulates and aerosols participate out in the twinkling of an eye.

Two. In any volcanic event, particulates vary in size. Some of them are HUGE (relatively), and never are “aerosols”.

Three. The lingering of any particulate in the atmosphere depends on the force at which they are ejected (i.e., the height they attain).

Four. The CO2 (and other organic gases) does NOT participate. At. ALL.

Ergo, a very few YEARS after a volcanic event, the particulates and aerosols are immaterial in gross atmospheric effects. BUT CO2 and other organic gases are NOT.

from the infallible Wikipedia:

So, aerosols directly, no; indirectly, appears so

Shirley that much CO2 output is ILLEGAL! Should we be at WAR with Chile for their ILLEGAL expulsion of gas? Or should we just boycott Chili’s?

Act of God exclusion. And don’t call me shirley, lol. (You made me go there).

The Earth is blowing smoke up the environmentalists’ … I stand with/on the Earth to celebrate this auspicious moment.

Too bad there were no of the Warmists standing on the rim of that volcano.

Mother Earth clearly proclaims “This should answer “Who’s your Daddy?”.”