“I will not obey that order”

“I will not obey that order”

Bill Whittle on political correctness in the military under Obama. 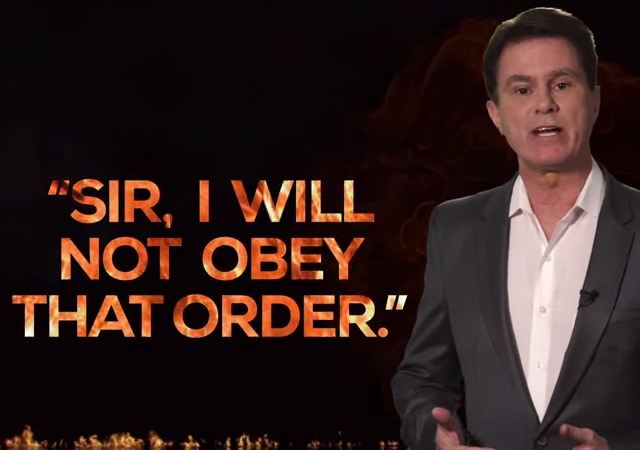 If there’s one thing the men and women who bravely put their lives on the line defending America and freedom shouldn’t have to worry about, it’s whether or not they’re offending anyone in the process.

Yet according to Bill Whittle, who has interacted with members of our armed forces, that’s exactly what’s happening under our current commander in chief.

Here’s a partial transcript of the new edition of Afterburner, via Truth Revolt:

Bill Whittle: ‘Sir, I Will Not Obey that Order’

Let’s just assume for a moment that you’re a radical, left-wing zealot, who was raised by actual communists, and who, naturally enough views the United States military as the tool of capitalist exploitation and colonial racism. Now, further assume that through a perfect storm of Extraordinary Popular Delusions and the Madness of Crowds, fate, money, power and media bias somehow conspired to make you Commander in Chief of those same armed forces.

What would you do?

You couldn’t very well scuttle 11 carrier strike groups. You can’t just destroy entire air wings, or armored divisions, or any of the rest – no matter how much you may want to. That would break the spell.

If you hate this country, and you especially hate the military, you simply cannot go around destroying the weapons – that’s too obvious. But you can do something much more subtle, and in the long run, even more disastrous, if your stated goal is to fundamentally change the country and the military that protects and defends it.

Here’s one piece of related good news. The victims of the massacre at Fort Hood are finally going to receive their purple hearts. The Washington Times reported yesterday:

Victims of the 2009 Fort Hood shooting will receive the Purple Heart in a ceremony Friday morning in the culmination of a yearslong battle to designate the shooting spree as an act of terrorism.

Forty-seven medals — either the Purple Heart for military or Defense Medal of Freedom for civilians — will be presented during the ceremony to victims who were injured or the families of those who were killed in the attack, according to a release from the Texas military base.

Last year’s annual defense policy bill opened the door for victims of Army Maj. Nidal Hasan’s shooting spree to finally receive the award by saying the attack was part of the broader war on terrorism, overriding the administration’s classifying it as a matter of workplace violence.

Our brave men and women know all about “workplace violence” and they deserve thanks for their sacrifice.

The U.S. Pacific Forces top commander warned that the region’s greatest threat is not North Korea or China, but climate change. Navy admiral Samuel J. Locklear III said in an interview that he sees rising sea levels as the top threat, predicting that the sea levels would “cripple the security environment, probably more likely than the other scenarios we all often talk about.” Locklear added that he has reached out to other military forces in the region, including China and India, to urge them to “get military capabilities aligned [for] when the effects of climate change start to impact” those countries. Similar sentiments have been raised by other leading American officials: Secretary of State John Kerry has warned that global warming is a leading global concern on a number of occasions, and has said that it poses a threat as dire as Iran’s effort to acquire nuclear weapons.

It is madness. Our services deserve to be led by people who are not frooot-looops.

I could not agree more. However these kind of policies are not specific to Obama. PC culture really started to become pervasive under Clinton. Under Bush, circa 2000, soldiers in my unit at Fort Bragg, living off post, were already ordered to register personally owned firearms. Forget about owning a firearm in the barracks. They had to be stored in the armory and it was a royal PITA to get them out to go to a civilian range on the weekend. Otherwise you only shot with the unit a few times a year.

Tattoos were also being policed by command during this time period, but at the time it was only really enforced when related to gang and neo nazi symbolism. Magazines were restricted in the office, but not on the barracks, and not so much so that Maxim would be prohibited. People should be concerned that we’re creating a climate of feckless leaders, more concerned with individual ratings than actual performance of soldiers, and these leaders are exactly what allowed atrocities like Abu Ghraib to become possible. I can only imagine how much worse things the command climate has gotten in the last 15 years. Especially, the last two terms with Obama as commander and chief. However, truth be told, these policies were in place before he came on. They have simply been expanded upon.

This “register your personal firearms” thing is baffling. When I worked as a DOD civilian, there’s no way I was going to tell management about my privately-owned firearms–none of their damned business.

I’m also increasingly concerned about the PC officer corps–friends of mine still working DOD said there’s an alarmingly high number of flag rank officers now who are dumb as a sack of hammers, but parrot all the acceptable PC nostrums per whatever latest idiocy the admin is advocating.

Those flag rank officers were all promoted to those ranks by Obozo, so naturally they would support him. In the same time frame, those flag officers that had some balls were systematically weeded out and replaced by said PC officers.

A very good example of this, is how they have treated the top Navy Chaplin. They have more or less made the work climate around him so bad that he will be forced out, by any means possible.

There was a purge not too long ago of generals and other high-ranking superior officers – Allen West was the only one who was writing about it. (…that I recall; I’m sure there were others – but I didn’t see them.)

It’s intentional. That’s how ideologues work. When you have mind-numbed robots swearing allegiance to a person, not the Constitution and the nation’s people, they will do whatever that individual says. History has shown that time and again.

And – why destroy all the “cool toys” that make you the most armed and powerful person (or one of the) on the planet?! Able to turn – even fire – these guns (tanks, drones, jets, etc.) on your “enemies” and “targets” (by which I do NOT mean foreign threats)? Just make sure you have zealots manning and running ’em. This regime has stated since nearly day 1 that it’s the PEOPLE who love this nation who are the “danger”, the “terrorists” and the “REAL(tm) domestic threat.”

And who can forget this gem of young males “drill-marching” for Obama, or this one, from the 2008 campaign promising a DOMESTIC CIVILIAN para-military-type force “just as powerful, just as strong, just as well-funded” as the US 2008 military?!

And here we are. These are really, truly scary times.

Anyone recall the Soviet purges of the 1930’s? Yea, that worked out well.

While I cannot speak for all the branches, the Air Force top leadership have their flight suits in a bundle about all the politically correct topics. You probably won’t believe me, but twice per year every base in the Air Force has a “down-day” where we receive all manner of briefings about Sexual Assault Prevention & Response, freedom of religion training (really it’s freedom from religion training), and we’ll-continue-to-do-more-with-less training. One of our SAPR briefers who receives a generous salary from the DoD spent an hour explaining to the 2,000 person audience what rainbow parties, mushroom-bumping, good-gaming, chest-bumping, and tea-bagging are; and how they aren’t really appropriate to talk about or perform in the workplace…The Air Force cut 5% of it’s personnel end-strength last year, but thank God they were able to afford 2 work-days off for everybody to talk about those “sensitive” issues!