He descended into Hell

He descended into Hell

One of Kenyan gunmen was son of a government official. 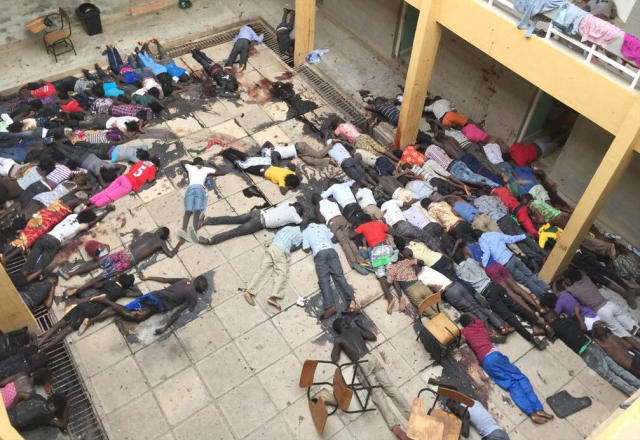 On this Easter Sunday, I wanted to share some thoughts I had during these past days about the most recent butchery of my fellow Christians in Kenya.

Following the news as closely as I do, I thought I had become accustomed to graphic images of terror that ISIS has spawned. Then, I saw this tweet:

I was punched in the gut.

Perhaps it is because I recall my step-daughter, whose graduation I attended just a few short years ago? She was so vibrant, and fulled with life and prospects for a happy, healthy and successful future.

Now, 148 families will not get to experience the same joy. Evil has extinguished 148 young students who would have contributed so very much to their families, community and nation.

Perhaps it is because my son is now talking about going to college, and has mentioned several Catholic universities as possibilities? As I read this passage from a news report, I mentally placed my boy in this situation:

Collins Wetangula, the vice chairman of the student union, said when the gunmen arrived at his dormitory he could hear them opening doors and asking if the people who had hidden inside whether they were Muslims or Christians.

“If you were a Christian you were shot on the spot,” he said. “With each blast of the gun I thought I was going to die.”

Perhaps it is because I am angry, because family pizza joints in this country are easy targets for religious-tolerance campaigns by members of the “Church of Perpetual Outrage”? This butchery should be the type of event that inspires activism.

Appallingly, despite the coverage, President Obama failed to mention the fact Christians were targeted in his formal statement on Kenya.

Today, a special Easter Mass was offered in Kenya…appropriately in Our Lady of Consolation Church, which was attacked several years ago by Islamic militants.

New reports being released indicate that one of the gunmen who slaughtered 148 people at a college in Kenya was identified Sunday as the law-school-educated son of a Kenyan government official, and highlights how effective the terrorists recruitment drive has been:

Abdirahim Mohammed Abdullahi, who was killed by security forces Thursday along with the three other militants who stormed Garissa University College, was the son of a government chief in Mandera County, which borders Somalia, Interior Ministry spokesman Mwenda Njoka told The Associated Press.

The chief had reported his son missing last year and feared he had gone to Somalia, Njoka said.

…The news that one of the gunmen was Kenyan highlights the challenges faced by the government in preventing terrorist attacks. The danger comes not only from neighboring Somalia but also from within Kenya.

Kenyans make up the largest number of foreign fighters in al-Shabab, according to experts. Hundreds of Kenyan youths have trained with al-Shabab and then returned to Kenya, posing a major security threat, according to former police chief Mathew Iteere.

Social media tools have ensured that nearly all Christians are aware that they are potential martyrs at the hands of Islamic terror agents. And while “sainthood by martyrdom” is an option, personally I would prefer Pope Francis highlight our Warrior Saints.

This time, the Christians would not be fighting to make unwilling converts, but to defend ourselves from evil. I want to see the evil perpetuated by ISIS and other radicalized adherents to be vanquished completely.

I was reminded yesterday that Jesus Christ descended into Hell. Sadly, hell has come to earth. I spent Holy Saturday praying for Kenya’s martyrs, and vow to do the same for innocents who die at the hands of terrorists next year. Hopefully, that list will be shorter next year. 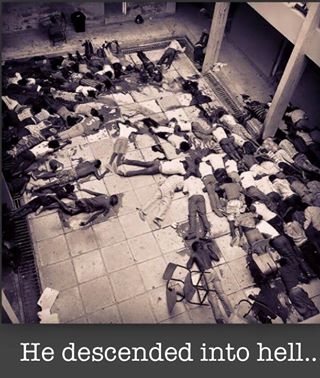 4 men did this and had time to sort the sheep from the goats in the process. The Kenyans obviously need some sort of rules about carrying weapons on campus, either forbidding murderers from bringing them in or allowing some of the students the opportunity to defend themselves.

Oh wait… I believe they’ve already got the first one.

We must resume acting like as soldiers of Christ, not as cattle being led to slaughter. There will come a time, sooner than later, IMO, when this madness and terror will strike somewhere in the US. The question might be how hard will that strike be, and how will our government act.

With Obama wishing for larger unregulated inflows of immigrants, we will find more enclaves like “Dearborn” and more highly aggrieved and angry people of “faith,” for which the only answer I can find is to welcome them as long as they are willing to abide by the laws of the US and our Western culture. Still, Islam allows lying to promote expansion of its authority, so their statements need to be accompanied by their good, compliant, and decent actions.

Our damned president cannot even acknowledge that the victims of this horrible Kenyan butchery were Christians. Obama continues to use his typical avoidance of casting blame on Muslim referring to “random victims.” We cannot depend on Obama’s good acts to protect our citizenry rather, IMHO, he will attempt to call for calmness in the face of a storm.

In early 1775, the local militias of New England prepared for a coming battle. That might be the precedent we need to consider following because for now, unless local police act, who shall be there otherwise for our people?

An aside: It’s not just Christians, or even just those all other non-Muslims, but also Muslims who do not subscribe to Jihadi ideals or principles.

Our damned president cannot even acknowledge that the victims of this horrible Kenyan butchery were Christians. Obama continues to use his typical avoidance of casting blame on Muslim referring to “random victims.”

Sometimes I think that the complete lack of acknowledgement of who’s doing the killing versus who’s doing the dying is helping cause the singling out of Christians and Jews worldwide: The Islamic terrorists are upset that their message is being lost or ignored, so they’re upping the ante to make sure it cannot be ignored for much longer.

They are figuratively thumbing their noses at the Obama Administration and the American press, and all but daring them to continue overlooking the terrorists’ agenda. How long can Our Dear Leaders afford to be intentionally obtuse?

One of Kenyan gunmen was son of a government official….

How’s this: the greatest traitor in American — and world — history is a Kenyan.

This is Islam, day in day out.

More despicable and obscene every day.

One thing about this that is incomprehensible to me is that even these depraved Islamic zealots have access to the Atoning blood of Jesus Christ.

Thanks be to God!

http://shoebat.com/2015/04/05/jesus-spotted-in-africa/
read that last night, sort of resonated with me.
I’ll admit i have issues linking to/trusting an ex-plo member but he does some (IMO) good writing.

The power that is the Christ. 2,000 years after this “fictitious” nonentity died, and His Name still strikes such fear and hatred among non-believers. That right there is the proof of Him.

The wall street journal article said the police arrived o n the scene at 7 PM, they omitted when the attack started. You would think that it was easy to include in the report. The school was obviously a gun free zone that included campus security that was reported over run. Apparently the killers just ran out of ammunition.