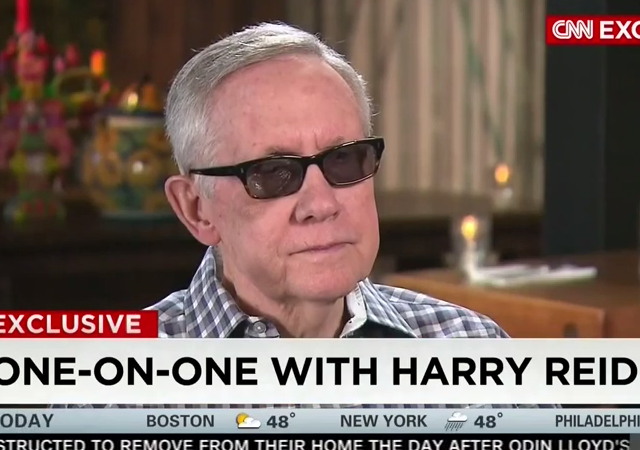 Each day brings a new reason to be happy about Harry Reid’s impending retirement.

The newest one is his outright admission that he used his position as senate leader to dishonestly smear Mitt Romney in the run-up to the 2012 election.

Even the reliably liberal Chris Cillizza of the Washington Post is disgusted:

One of the more outlandish moments of the 2012 campaign came when Senate Majority Leader Harry Reid went to the floor of the world’s greatest deliberative body and accused GOP nominee Mitt Romney of not paying any taxes at all for the past 10 years. Reid’s evidence? Someone had told him. (That “someone” is alleged to be Jon Huntsman, father of the former Utah governor. Huntsman denies involvement.)…

And yet, the clip above shows Reid, in an interview with CNN’s Dana Bash, not only refusing to apologize for the claim but defending it — in a very weird way.

“Romney didn’t win, did he?” Reid said in response to Bash’s question of whether he regretted what he had said about Romney.

Think about that logic for a minute. What Reid is saying is that it’s entirely immaterial whether what he said about Romney and his taxes was true. All that mattered was that Romney didn’t win.

Here’s the clip Cillizza is referencing:

Last night on FOX News, Megyn Kelly and Dana Loesch had a few things to say about this.

Video via the Gateway Pundit:

“Censored”? How about being brought up on charges of corruption and sent to jail? The idea that one can lie blatantly to the public should have severe consequences.

It’s serious that so much is done and it’s just pushed under the cover of “politics” when in reality it is outright corruption.

And where was the GOP’s response when Reid did this to Romney? Where was Romney? Cowering under their cover of comity and afraid to call out the Democrat leader for the sleazeball he was/is.

I always default to “all of the above” when contemplating things to do to Dirty, Filthy Harry.

Censure him, prosecute him, tar and feather his old feeble ass…ALLLLLLLLLL good, and maybe just a start.

Strip him of his ill-gotten wealth, and go after his corrupt children. Leave him in sack cloth and ashes, aware of all the ruin his life has bought him.

Hey, I can dream…

+…turn on a spit in Hell with (fill in the name) at his backside.

You misunderstand Mr. Romney’s job in 2012, at least in the minds of the GOP elites: his job wasn’t to win, his job was to be the designated spear-catcher.

Fools like me liked Mr. Romney, and wanted him to come out swinging and win the election. The people in charge of the GOP wanted Mitt out there precisely because he wasn’t a street fighter. He wasn’t going to upset the order.

So of course: put up a nasty, low-life, mobbed-up brawler against a decent guy and what do you think happens? The response of the GOP — essentially to hold Mittens down so Harry could hit him some more — isn’t surprising at all in retrospect.

“Harry Reid: Extremism in the Defense of Fascism is No Vice”
—Ed Driscoll

“This kind of thing is surprising only if you haven’t been paying attention. And it’s not as if Reid is an outlier here, except in terms of his honesty.”
—InstaPundit

The sooner America understands that’s true, the more likely it is we MAY survive.

He is supposed to be a lawyer. Disbarment for using the cover of parliamentary privilege as cover for lying.

At this point the most you can do is make this [or any other similar] incident the centerpiece of his obituaries.

I think that Harry Reid is an even more despicable person than Barack Obama. And that is saying something.
In Obama’s defense, the poor guy never had a chance….if you look at his childhood and how and who raised him.
Reid should know better.
I am not a Mormon but I have always had utmost respect for their integrity. I find Harry Reid’s total and complete lack of any integrity appalling.
His answer, “Romney didn’t win did he?” shows a breathtaking lack of basic, common decency.

It has to be said again…and again, and again – people like Reid get away with this because the media has failed, and continues to fail to do its job. Democrats know there will be little or no recriminations for anything they say or do. What Reid did has been applauded and justified by the media, not condemned. It is only the right who is disgusted with him. Reid personifies the hate the left has for America’s values. He speaks for them, and the media has sanctioned his tactics and words.

The media say nothing because they agree with Dingy Harry – the important thing is to defeat Republicans at any cost, including lying, cheating, besmirching, and far worse. The collective Left are nothing if not children of Machiavelli ~

You’re right, the progs do this because they know their sycophants in the press will not only fail to cover it, but they’ll actively run interference for them.

It sometimes makes me wonder if it wouldn’t be a good thing if somebody bashed this vile troll’s other eye out for him. Maybe those are the sorts of recriminations it must come to. It’s a hypothetical question, of course.

It’s absurd to complain about the mainstream media not doing its job when supposed right-wing blogs are aiding and abetting them in the dismantling of the republic.

While I don’t disagree that some right blogs don’t totally support the conservative cause, they also don’t influence leftist thinking since that is not where they get their news. Your argument is a bit clumsy.

Correct me if I’m wrong but aren’t senators and representatives protected against charges of slander if they spout these things from the dais in the Senate or House? This is most likely why Reid said it from where he did. If he appeared on a TV show, maybe he could be sued but he said it from the Senate floor so he’s protected.
I am offended when people call him a “Mormon in good standing”. There is a Temple Recommend question asking if, essentially, you’ve dealt honestly with your fellow man. How can Harry Reid’s Bishop grant him a temple recommend after he slandered another member in public?

You’re correct. He does have immunity for making these charges from the Senate, and my personal opinion is, the immunity is correct, but society’s passive embracing of his slander is not. But hey, that’s been American politics since before 1800.

Our system of government couldn’t work if senators were constantly looking over their shoulders in fear of being arrested for something they said during debate. Could you imagine if President Stompy
Foot had the ability to arrest legislators who dissented?

As as you point out, our system will also fail to work if We The People stand idly by and let disgusting lying pieces of shit like Hairy Reed get away with the kind of shit he got away with for decades.

At the very least this is yet another study of how the media is disingenuine and deceitful perhaps without even realizing it (not likely). They run with the words from the sleazy Senator, front-paging them, repeating them ad nauseum, and even using it against Romney. Only long after the election outcome was satisfactory to most of those putting the effort into giving the falsehood legs, do they come back and question Reid about the smear. As if to say, gee you made us do it….

That Bundy Ranch thing was a major Filthy Harry plot to get that property so he could help his son and Red Chinese buddies build that casino. He knew that he could not get it by legal means, so he got the BLM to do his dirty work. Of course, the BLM was all too happy to help. If it had not been for the uprising of the grassroots in this country, Reid’s son and his cohorts would be building that casino now. Speculation here now: That could be the reason that Reid got the crap beat out of him.

Stevie Wonder just called … he wants his sunglasses back

The GOP doesn’t fight back. In fact, they enable Harry Reid and his ilk.

The best-kept secret of 2012 was that Karl Rove’s strategy was to coordinate a Romney loss to set the stage for Jebbie-Poo in ’16.

Supposedly, Reid based his claim on an anonymous source within Bain Capital. Did Romney ever release his tax returns so we can verify that Reid was wrong?

Burden of proof lies on the accuser, dimwit.

At least it did in the America I grew up in ~

And here you are, right on cue.

I wonder who beat up Harry Reid. Too bad the person didn’t use a gun … any gun, pistol, shotgun, whatever. He deserved it. Too bad no gun was used. It certainly was no exercise machine.

Holy cow. I saw this link on the morning email and thought it was an April Fool’s joke.

What is it about Democrats that they have to resort to telling lies? Notable liars are: Obama, Reed, Clinton (both of them), Pelost and a slew of others.

if they told the truth, they’d never win.

These recurring injuries for Reid are due to violent sex fetishes. He gets off on getting beaten up.
Zero chance any of this is due to ‘exercising’.

Think the Chinese wanted that land for a solar farm to steal money from the gov.

I sincerely wish he dies of abdominal cancer in a part of the world where morphine is as of yet undiscovered.