Taunt a radical feminist to celebrate! 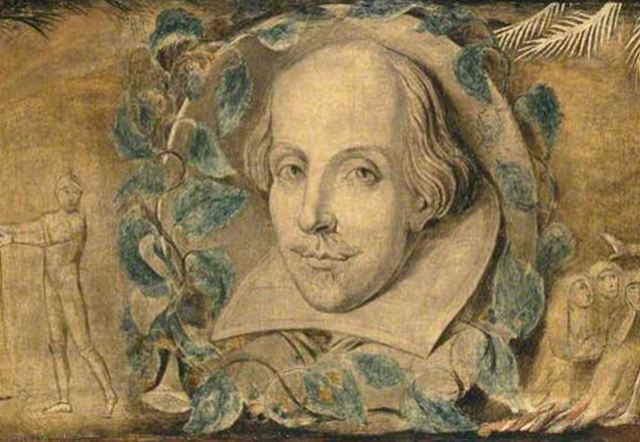 When I read Aleister’s post detailing the ludicrous trigger warning issued by Georgetown’s radical feminists for Christina Hoff Sommer’s talk, I was taken aback by this tweet from from an attendee of an event for the Association of Writing and Writing Programs.

After I got done rolling my eyes, I realized that it is unlikely that any one of these geniuses will be remembered for their writing in 40 years…much less 400 years.

This is compared to one very white, very straight man known as William Shakespeare, who was born on this day in 1564.

Although the plays of William Shakespeare may be the most widely read works in the English language, little is known for certain about the playwright himself. Some scholars even believe the plays were not written by William Shakespeare of Stratford-upon-Avon but by some other well-educated, aristocratic writer who wished to remain anonymous.

Shakespeare’s father was probably a common tradesman. He became an alderman and bailiff in Stratford-upon-Avon, and Shakespeare was baptized in the town on April 26, 1564. At age 18, Shakespeare married Anne Hathaway, and the couple had a daughter in 1583 and twins in 1585. Sometime later, Shakespeare set off for London to become an actor and by 1592 was well established in London’s theatrical world as both a performer and a playwright. His earliest plays, including The Comedy of Errors and The Taming of the Shrew, were written in the early 1590s. Later in the decade, he wrote tragedies such as Romeo and Juliet (1594-1595) and comedies including The Merchant of Venice (1596-1597). His greatest tragedies were written after 1600, including Hamlet (1600-01), Othello (1604-05), King Lear (1605-06), and Macbeth (1605-1606).

I doubt any of these young scholars have seen the inside of a Western Civilization course, so I thought I might use this day as a “teaching moment”.

Because any day when I can taunt raving, man-hating feminist lunatics is a good one, I also wanted to celebrate the birth of this literary legend by sharing some of my favorite moments from his plays. I invite Legal Insurrection readers to add their favorites, too.

However, given how much we love Professor Jacobson, perhaps we should dispense with Henry VI?

One of my favorite movie moments that features a straight, white male is from Henry V, The Speech on the Eve of Saint Crispin’s Day:

The fact that the piece celebrates warriors, instead of forcing them into red high heels as some sort of sick homage to feminism, is an extra bonus.

Here is another great Shakespeare moment in film, featuring another straight, white man…in the form of a very young and very appealing Marlon Brando.

My son and I just watched this together, as he was actually covering the play in his English class.

Finally, as an Egyptophile, I have to conclude with my very favorite part of “Antony and Cleopatra” (even though it does celebrate a queen).

One thing’s for certain: I will be celebrating William Shakespeare’s birthday much more robustly than I did Earth Day yesterday!

I hardly recognize my country anymore. What a strange place it has become.

I don’t believe the members of the “Assn of Writers and Writing Programs” have ever read Shakespeare.

And don’t assume that “Assn” means “Association”. It means “Assassination.”

How many millennials have read Shakespeare, or Homer, or Plato, or any other of the classics? These are not studied any more. Dead white men.

May I brag that my twelve year old is a devoted follower of the Bard and has read most of his major works and a huge number of his sonnets? Oh, and she can insult people in Shakespearean language. Mama’s so proud!

The St. Crispin’s Day speech is by far one of the best moment on film – tied for first, IMHO.

I also love Much Ado About Nothing with Emma Thompson and Kenneth Branagh. Some of the best Shakespeare on film.

(I have to give credit to Laurence Olivier, because he was fabulous, his portrayals timeless.)

Happy Birthday to the Bard! “Be ye blithe and bonny….hey, nonny! Nonny!” 😀

I love Branagh’s version of the St Crispin’s speech. Much more than Olivier (oh, the horror!)

Branagh’s seems more down to earth, more raw, much closer to the reality of the field at Agincourt that day. Brilliant stuff.

The version with Olivier seems more concerned with the pageantry and Olivier does not deliver with as much emotion.

The most important concept one needs to grasp about modern feminism is that it is a female supremacy movement disguising itself as an equal rights movement.

“Whom I, with this obedient steel, three inches of it,
Can lay to bed for ever; ”

I am partial to the above line from The Tempest. While I consider myself pretty liberal, I would like to take this opportunity to use this line to annoy gun-controllers, since it is clear the character (if not Shakespeare) believes that his weapon is merely a tool, and not some magic killing machine…

Daggers don’t kill people, people with claims to thrones do!

The feminists won their battle, with the passage of Title VII and Title IX of the Civil Rights Act. Although they sought passage of the Equal Rights Amendment, others rightly pointed out that such an amendment was not necessary, because the Constitution already extended citizens’ rights to “every person.”

Title VII and Title IX required that, if the government spends money, it does so in a nondiscriminatory fashion, which was the real problem. In the States, equal rights amendments were used to keep fake big shots, particularly at banks, from refusing to count a wife’s income as part of the family income for the purpose of calculating the size loan available. Prior to that time, banks could and did decide in their own minds that any married woman was going to get pregnant and quite work.

After the feminists won their battle, they turned to using their rights, to better provide for their families. The bitter clingers were the only ones left. In their own little air-tight environment, they turned toxic.

the bard shares the day with a truly great person too, me.
bet he didn’t know how historic his Bday would become in 1968.

I’d like to recommend the Polanski version of MACBETH. Bloody, brutal, not for the faint of heart….and absolutely fantastic.

And my very favorite speech, in which Hamlet, deep into faking his insanity, touches on what it means to be a man:
“I have of late—but wherefore I know not—lost all my mirth, forgone all custom of exercises, and indeed it goes so heavily with my disposition that this goodly frame, the earth, seems to me a sterile promontory; this most excellent canopy, the air—look you, this brave o’erhanging firmament, this majestical roof fretted with golden fire—why, it appears no other thing to me than a foul and pestilent congregation of vapors. What a piece of work is a man! How noble in reason, how infinite in faculty! In form and moving how express and admirable! In action how like an angel, in apprehension how like a god! The beauty of the world. The paragon of animals. And yet, to me, what is this quintessence of dust?”

sort of a REALLY way off topic shakespeare item but I liked this book
http://connect.collectorz.com/books/detail/69022
while all fiction theres pars of it where he’s a teen.