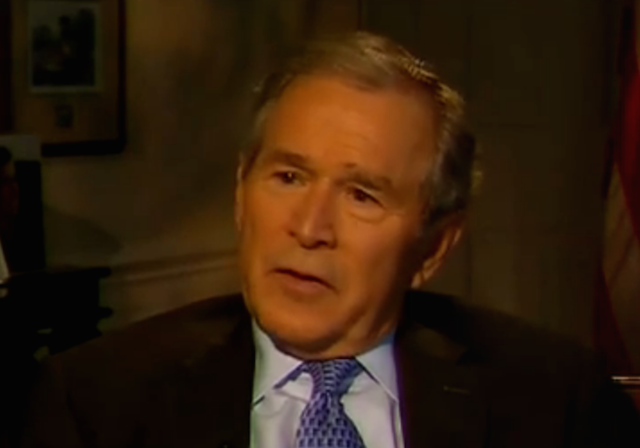 When it comes to the Obama administration, George W. Bush doesn’t want to talk about it.

Correction: he doesn’t normally want to talk about it. Since Bush left office, he has kept remarkably (and some say refreshingly) quiet about politics, policy, and the wrecking ball that is Team Obama. It’s a testament to his class, and throws into sharp relief the grasping desperation of the “But BUSH” crowd. At a recent meeting with donors at the Republican Jewish Coalition, however, Bush let fly some long-held criticisms of Obama’s policy toward Iran, the war against ISIS, and Vladimir Putin.

The former president…at first remarked that the idea of re-entering the political arena was something he didn’t want to do. He then proceeded to explain why Obama, in his view, was placing the U.S. in “retreat” around the world. He also said Obama was misreading Iran’s intentions while relaxing sanctions on Tehran too easily.

According to the attendee’s transcription, Bush noted that Iran has a new president, Hassan Rouhani. “He’s smooth,” Bush said. “And you’ve got to ask yourself, is there a new policy or did they just change the spokesman?”

Bush said that Obama’s plan to lift sanctions on Iran with a promise that they could snap back in place at any time was not plausible. He also said the deal would be bad for American national security in the long term: “You think the Middle East is chaotic now? Imagine what it looks like for our grandchildren. That’s how Americans should view the deal.”

(Of note: this was a closed-door session with donors, meant to be off the record. That could explain why Bush was more open about his views on the state of the union—but who discounts the possibility of a leak? Strategy? Shift toward brutal honesty and carpe diem.)

The money soundbite came during Bush’s description of how Obama has fumbled Middle East policy:

Obama promised to degrade and destroy Islamic State’s forces but then didn’t develop a strategy to complete the mission, Bush said. He said that if you have a military goal and you mean it, “you call in your military and say ‘What’s your plan?’ ” He indirectly touted his own decision to surge troops to Iraq in 2007, by saying, “When the plan wasn’t working in Iraq, we changed.”

“In order to be an effective president … when you say something you have to mean it,” he said. “You gotta kill em.”

Someone tell Obama—I don’t think he understands this concept yet.

Bush also dived into the 2016 election debate, emphasizing the importance of foreign policy competency and rejecting the idea that America can lead via isolationism. When asked about the possibility of a Jeb Bush candidacy, the former president admitted that the Bush name is a heavy burden to carry, and that America could tend to reject the idea of a dynasty in the White House.

This isn’t the first time the former president has gotten cheeky with an audience while discussing the 2016 elections. In an interview with Sean Hannity late last year, Bush took a swipe at a Clinton candidacy and offered moral support to his brother Jeb:

“Look, I’ll still like him [Bill Clinton], if Jeb — when Jeb beats Hillary,” a smiling Bush told Fox News’ Sean Hannity in a clip of an interview that aired Thursday.

“Are you betting on that?” Hannity asked.

“If Jeb runs, I think, yeah — Look, I don’t know if he’s going to run, I really don’t. I hope he does because he’d be a great president,” Bush said in the interview, which will air in full Thursday evening on “Hannity.”

That being said, in his remarks to the Coalition, Bush was reluctant to go all in on the prospect of another Bush candidacy:

…Mr. Bush was asked a winking question about the qualities he sought in a president. But instead of aggressively boosting his brother, whom he described as capable, Mr. Bush acknowledged being a liability to his brother’s candidacy, noting that it was easy for his rivals to say in debates that we don’t need another Bush.

“He basically said being a Bush is a challenge” said Norm Coleman, a former senator from Minnesota and board member of the Republican Jewish Coalition, who attended the speech.

“He essentially said people don’t want dynasties in America,” recalled Elise Weingarten, another attendee. (The event, held behind closed doors, was off the record, with a “no notes” rule announced at the beginning.)

According to other attendees, Mr. Bush expressed a reluctance to enter the campaign fray, because it would be unhelpful to his brother, but also unseemly. “That’s why you won’t see me,” he said.

He’s right. All you have to do is look at the comments on any Legal Insurrection article about Jeb Bush to know that much of conservative America is opposed to and nervous about the idea of another Bush candidacy. It’s a fair opinion, and one that President Bush obviously recognizes and respects. I don’t think it’s reasonable to ask him to torpedo his brother—which would never happen anyway—but refusing the spotlight is both a recognition of political reality, and a nod to the conservative base.

I don’t know about you, but I miss W.

I neither detest nor miss George W. Bush. I’d sit out rather than vote for Jeb Bush.

I agree with Henry Hawkins on this one. I don’t miss “W” nor will I ever vote for another Bush again. They’re all socialists. Bush is probably just jealous that he didn’t get to do all the things the man that calls himself Obama is doing. We need better people than this. Please.

Although Bush’s unwillingness to defend conservative political philosophy finally drove me from the ‘Ican Party in 2007, it’s hard not to miss him given the last six years. George W. is far from perfect, but he’s damn near infinitely better than Obama.

That said, I shall never vote for Jeb, or for several other ‘Icans who may end up running for next year’s nomination.

He wasn’t a conservative in practice, just in candidate. “Compassionate conservatism” was an election year euphemism for plain old progressivism.

Bush addressed Hussein’s long-standing violations of the ceasefire. Our military and partners did an outstanding job to capture Hussein, and assure that he stood trial in Iraqi jurisdiction. Furthermore, they performed admirably to minimize collateral damage, stabilize Iraq, and reestablish relationships with the people. Unfortunately, Obama had a different plan for the Middle East and everything Changed.

When 9/11 happened, my wife and I thanked God that Gore wasn’t president; and still feel that way.

However, “W” was a near run disaster when it came to the financial side of things plus the selection of Bremer to be Consul over Iraq was a very poor decision.

Don’t miss him in the slightest. Can’t endure another Bush. and G.W. may not be “out in front,” but you know he’s in the background raising money, and talking with power brokers, to help his brother.

If out of 250 million people (not including the illegal aliens), we can’t find an American worth his salt to be president, then we need God’s help more than ever.

Yep, I’ve missed him—BIG Time—since, OOooooooooohh, around January 21, 2007. So have our friends and allies around the world.

Our Enemies..? No, they haven’t missed him. They thank Allah for the scrawny Punk in the White House. Weakness, as history has taught anyone with a brain, is provocative.