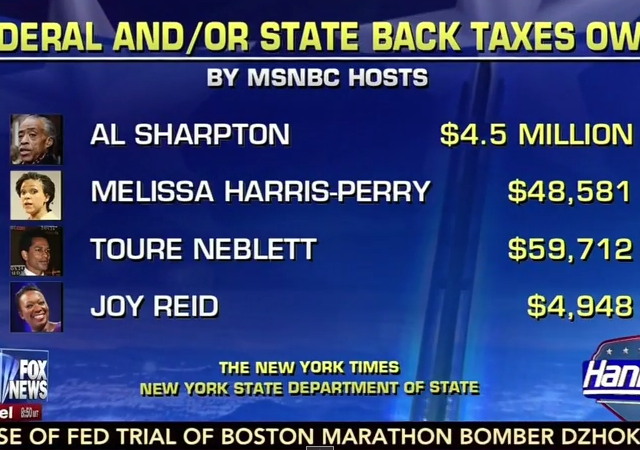 The progressive hosts of MSNBC may like the idea of big government programs, but for some of them, paying taxes seems to be a challenge.

Jillian Kay Melchior outlined the issue in a recent column for National Review:

MSNBC’s Touré Has the Taxman on His Case

Touré Neblett, co-host of MSNBC’s The Cycle, owes more than $59,000 in taxes, according to public records reviewed by National Review.

In January 2014, Neblett tweeted, “Regressive taxation & tax-avoidance & union crushing & the financial corruption of legislation has fueled inequality more than hard work.” In 2012, he also criticized Republican politicians, saying they were “all afraid to vote for a modest tax increase of people who can totally afford it.”

MSNBC’s hosts and guests regularly call for higher taxes on the rich, condemning wealthy individuals and corporations who don’t pay their taxes or make use of loopholes. But recent reports, as well as records reviewed by National Review, show that at least four high-profile MSNBC on-air personalities have tax liens or warrants filed against them.

Melchior discussed the issue with Sean Hannity on Thursday night:

Noah Rothman of Hot Air reminds us how other progressives love to use this issue to attack conservatives:

Apparently, no one at MSNBC pays taxes

Democrats are fond of accusing Republicans of being hypocrites on a variety of issues, but particularly when it comes to tax policy. The liberal comedian Bill Maher recently claimed that Republicans expose themselves to this critique when they champion the value of hard work and perseverance while simultaneously opposing the inheritance tax.

“If the tough love of cutting off free money for the poor is the right thing to do, how can we stand by and do any less for the Conrad Hiltons of the world? They’ve never known the dignity of work either,” Maher insisted recently. “Shouldn’t we be helping by taxing inheritance at 100 percent?”

Maher seems unaware that the estate tax primarily burdens middle-class Americans and not the truly wealthy who have the wherewithal to avoid that tax by investing in trusts. But Maher’s argument wasn’t designed to appeal to logic; it was more of a tribal grunt.

But at least Maher was trying to be funny – he is, after all, a comedian. By way of contrast, the gaggle of progressive hosts on MSNBC are deadly serious when they issue the oft-repeated charge that the GOP’s pro-growth tax policy preferences are interchangeably heartless, selfish, and quite possibly racist.

Now is a good time to point out that no one has been held accountable yet for the IRS targeting of Tea Party groups. It’s also important to remember that Harry Reid dishonestly said that Romney didn’t pay his taxes during the 2012 election, a claim that was repeated on MSNBC.

Touré was particularly critical of Romney over taxes in 2012. Here’s a flashback from The Blaze.

bsNBC is populated by thugs and assholes.

(We knew this, but it’s still useful to have MORE facts.)

and evidently the sexist IRS is also racist……….

Meanwhile back at the ranch…. Er…I mean back on the Democrat Party Plantation……

Be sure to check all their time-line charts!

IIRC Leona Helmsley went to jail for not paying her taxes.

Nope. She went to jail for EVADING taxes, which is not at all the same. EVASION is a form of fraud.

In reality, there are very few things you can do that will result in you being jailed over the issue of Federal taxes.

Sharpton appears to have issues with both the IRS and the NY Department of Revenue. I believe the other MSNBC employees are mostly involved in tax disputes with the State of New York.

My professional experience is that New York state is simply insane in its interpretation of what constitutes NY source income and what is allowable in terms of a credits for taxes paid to other states (and to DC. For example, New York tried to tax the income of a non resident client who telecommuted from her home in Chicago because the home office of the company she worked for was in New York. .