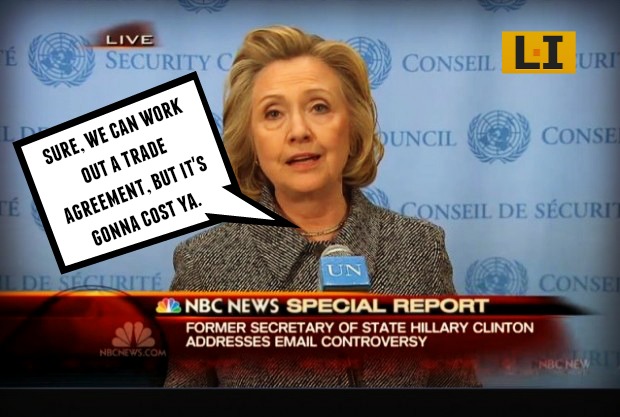 A report released today by the International Business Times suggests the Clinton Foundation was indeed a thoroughfare for trading influence and political favors.

Unless of course the timing was purely coincidental, IBT’s report indicates the Clinton Foundation accepted money from a Colombian oil company while Clinton was serving as Secretary of State. After procuring the donation, Secretary Clinton then decided to support a Colombian trade agreement, though she’d vocally opposed it during the 2008 election cycle.

For union organizers in Colombia, the dangers of their trade were intensifying. When workers at the country’s largest independent oil company staged a strike in 2011, the Colombian military rounded them up at gunpoint and threatened violence if they failed to disband, according to human rights organizations. Similar intimidation tactics against the workers, say labor leaders, amounted to an everyday feature of life.

…Yet as union leaders and human rights activists conveyed these harrowing reports of violence to then-Secretary of State Clinton in late 2011, urging her to pressure the Colombian government to protect labor organizers, she responded first with silence, these organizers say. The State Department publicly praised Colombia’s progress on human rights, thereby permitting hundreds of millions of dollars in U.S. aid to flow to the same Colombian military that labor activists say helped intimidate workers.

At the same time that Clinton’s State Department was lauding Colombia’s human rights record, her family was forging a financial relationship with Pacific Rubiales, the sprawling Canadian petroleum company at the center of Colombia’s labor strife. The Clintons were also developing commercial ties with the oil giant’s founder, Canadian financier Frank Giustra, who now occupies a seat on the board of the Clinton Foundation, the family’s global philanthropic empire.

But it gets better:

The details of these financial dealings remain murky, but this much is clear: After millions of dollars were pledged by the oil company to the Clinton Foundation — supplemented by millions more from Giustra himself — Secretary Clinton abruptly changed her position on the controversial U.S.-Colombia trade pact. Having opposed the deal as a bad one for labor rights back when she was a presidential candidate in 2008, she now promoted it, calling it “strongly in the interests of both Colombia and the United States.” The change of heart by Clinton and other Democratic leaders enabled congressional passage of a Colombia trade deal that experts say delivered big benefits to foreign investors like Giustra.

Thus far, Clinton’s private email and mysteriously empty private server tales have dominated headlines, and for good reason. That the embattled former Secretary of State may have quite literally traded diplomatic favors in exchange for private donations is even more concerning.

If we’re to look at EmailGate and the Clinton Foundation allegations as layers, or strata of the same scandal, the facts that Clinton 1) used a personal email account and 2) that her private server was supposedly wiped clean, make more sense than if the two are separated into self-sustaining scandals. Further, if may provide context for why Mrs. Clinton opted to wander down the unprecedented path of being the sole proprietor of her official records.

Lady’s a loser. But she does suck up cash that perhaps would have helped the democrats find a better horse.

From the looks of things … besides hillary and jeb bush … both parties seem incapable of finding talent to run as their presidential ticket topper.

I gawd, your idea of “talent” is…well…beeee-zareee.

And I want no part of it, personally.

NOBODY with the ability to think critically in the least has much doubt…if ANY…that the Clinton foundation is a corrupt and corrupting slush fund for global influence-peddling.

The Clintons are a family oligarchy, headed by a pathological liar and serial sexual abuser and his enabling “wife”.

They have both been crooks since Arkansas.

Hillary didn’t make $100K on $1000 in cattle futures by reading her father’s Wall Street Journal as a kid. It was a bribe from a broker seeking influence and everyone knows it.

Her law firm billing records did not disappear when subpoenaed and accidentally turn up in her private library at the White House two years later, she hid them on purpose and failed to properly screen one employee to make sure they were as dishonest as she.

And Susan MacDougall spent a year in jail instead of testifying truthfully about the Clintons’ part of another crooked deal. Think about that.

You’re full of crap as usual, a false witness to the facts. The only critical thinking you’re capable of is partisan shrieking; the only ‘slush fund’ evident is in your mind.

The Clinton Foundation DOES good work worldwide to improve the lives of poor people. Only a hateful bottom feeding political partisan old fart like you would disparage its work.

The Foundation has helped improve the health and social and economic conditions of hundreds of thousands of people through programs they’ve developed and funded, alone and in concert with other renowned philanthropic foundations. If you weren’t a lazy lying deceptive moron you’d actually LOOK at the Clinton Foundation contributor list and see where the majority of the money is coming.

Donation amounts greater then $25,000,000 come from organizations like the Bill & Melinda Gates Foundation, the National Postcard Loterij (the Netherlands charity lottery), and UNITAID – the global initiative financed by levies on airline tickets, whose board of directors included representative from ‘terrorist’ nations like France, Brazil, Norway, Spain, the United Kingdom, and South Korea.

The Clinton Foundation helps UNITAID negotiate and supply low priced drugs and diagnostics for prevention of HIV/AIDS, Malaria and Tuberculosis in developing countries. Thousands of lives have been saved as a result of the Clinton Foundation’s work. As have other thousands benefited from the Foundation’s relief funds to Haiti after the destructive earthquake there, and help to victims of Hurricane Katrina.

That is only a fraction of the Foundation’s philanthropic work. Long after the Clintons are gone from this earthly-coil, the Foundation will mitigate the negativity of political critics and preserve a positive legacy for them among reasonable people — which of course leaves you and your fellow paranoid haters out.

There’s a Yiddish saying for dishonest rants from meshuggeners extreamists like you. Take it in the spirit it’s given: Geh kaken oifen yam!.

Until Hillary Clinton moves left, expect a growing trickle of scandals big and small. If she refuses to move left, expect campaign killing leaks and the ascension of Elizabeth Warren.

This is awesome. Obama’s narcissism is so bad he’s going to use every power at hand to make sure his successor is equally far left infected. Tell me the White House doesn’t have mountains of State Dept records that would damn Hillary. Tell me Obama isn’t sitting on them, waiting…

The upshot – the Dems nominate someone so liberal, the GOP’ chances rise by leaps.

Along those lines, obama will demand a leftist candidate who will agree with him to “forgive” all student loans and to advocate for legislation deeming that forgiveness not to be treated as income for tax purposes. Once obama and his candidate have so agreed, obama will announce the loan forgiveness in October 2016, to ensure a huge youth vote for the leftists.
Icing on this cake for obama is that it would further damage America.

As noted on Twitchy, that is the sort of thing that could make you delete your emails on your private server!

Guistra is the same fellow who flew with Good Old Bill to Kazakhstan when they were considering privatizing their uranium mining. Despite the fact that his “mining company” had no equipment, miners, experience, or anything but a corporate structure and a dream, after Clinton met with the Kazakh President, Guistra’s company was awarded exclusive contracts making it one of the biggest uranium producers in the world.

Not an unproductive trip, eh?

In a totally unrelated and serendipitous coincidence a few days later, Guistra donated over $31 million to the Clinton Foundation – which they proceeded to under-report on Hillary’s financial disclosure to become Secretary of State.

Life sure is funny sometimes, isn’t it?

You need to examine all the facts, objectively.
Do you even know who Frank Giustra is? Do you have any knowledge of the amounts of money he donates to charity, apart from the Clinton Foundation? Do you even know that the $31 million to the Clinton Foundation you quoted above is a fraction of the amount of money he’s given them? Do you know what the money Giustra gives the Clinton foundation is used for? Do you know anything about it?

Do you know you how wrongheaded in your statement that “his ‘mining company’ had no equipment, miners, experience, or anything but a corporate structure and a dream”? That’s like saying Donald Trump had no bulldozers, cranes, carpenters or cement workers upon acquiring land to build a new hotel. Giustra made most of his fortune financing mining operations:

Wikipedia: “He is said to have “transformed Yorkton into a major force in the world of international mining finance.”[2] In 1990, he became President of the company and, in 1995, was appointed Chairman and CEO. From 2001 to 2007, Giustra was Chair of Endeavour Financial, a merchant banking firm which financed mining companies. Mr. Giustra is now Chief Executive Officer of Fiore Financial Corporation, an exclusive advisory services provider to Endeavour Mining Corporation,[3] a gold mining company listed on the Toronto Stock Exchange.”

Also this from Forbes: “Giustra had done major mining deals in Kazakhstan as far back as the mid-1990s. And as to uranium specifically, Giustra made a study of the uranium market back in 2004 and knew that the need for nuclear plants in India and China, as well as elsewhere, would boost demand.”

In fact the Forbes article blasts the crap out of Conservative BS whining about the entire uranium deal, and Bill Clinton’s role in it (he didn’t have any):

Will the truth set you free?
I doubt it.

The whole central America narco world is surely tied in with Fast and Furious, and with the trafficking of drugs and humans through Mexico, then covertly transported around America, by Obama, on the taxpayer dime. And we can’t forget Honduran Zelaya and his ties to the drug world, and how Hillary and Obama stood up for him, aligning with Castro and Chavez.

Colombia seemed more pro-American than others in the region, but had their cross border wars with the narco-terrorists. Unions were supposedly demanding higher wages (a stated reason for holding up their trade status iirc), but other reports discounted that. Maybe the real holdup was that Hillary is against such things, TILL she gets the pay to play grease.

America has been hostage to such “bargaining” for a long time. If we want health care reform, it has to be the socialist way. Want border reform, it has to give voting rights to 50 million illegals, once all their cousins come on the chain immigration plan.

America gets nothing it needs and expects from government, unless it gives ground in law or money, to the “commie” left. That’s how commie government works. “This thing is effin’ golden” as our now imprisoned ex-governor once said about selling Obama’s senate seat.