There is no way the pro-abort crowd can honestly say they’re not arguing for the right to murder. 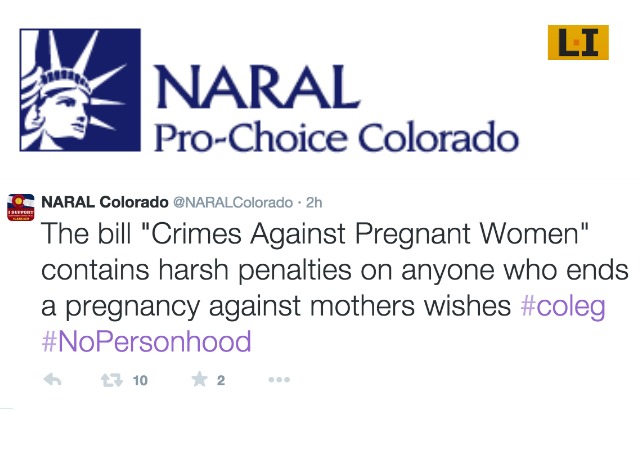 Earlier today, Colorado’s chapter of the National Abortion and Reproductive Rights Action League, or NARAL, tweeted a disturbing admission in response to a bill currently rattling around in the state house.

I read this over and and over again, hoping NARAL Colorado wasn’t advocating against penalties for those who end a pregnancy against a mother’s wishes. But there’s simply no way around it — NARAL is anti-personhood.

They went on to say:

And then kept digging:

SB-268 is rather straightforward. It defines a person, ” for the purposes of homicide and assault
offenses as a human being and includes an unborn child at every stage of gestation from conception until live birth.”

The bill doesn’t appear to trample on abortion “rights” as it clearly states, “For purposes of a prosecution of a homicide or assault offense, the bill does not apply to: An act committed by the mother of her unborn child; A medical procedure performed by a physician or other licensed medical professional at the request of a mother of her unborn child or the mother’s legal guardian; or The lawful dispensation or administration of lawfully
prescribed medication.”

Republican lawmakers introduced a bill in the closing weeks of the session to give prosecutors the ability to file murder charges in the death of an unborn child — a reaction to the March 18 attack on a Longmont woman whose 7-month-old fetus was cut from her womb and died.

The supporters say the measure is designed to provide “justice” for the fetus, not just the mother, and echoes fetal homicide legislation in nearly 40 states.

Senate President Bill Cadman, the lead sponsor, said he crafted the legislation to avoid the entrenched rhetoric on either side.

The bill, he said in a recent interview, is intended “to guarantee that a woman who wants to have a baby is protected” the same as a woman who chooses an abortion, “just like she is now.”

NARAL claims to serve in the best interest of women’s rights, but rejects protections for unborn women. As statist ideology lurches even further left, their ability to mask ulterior motives weakens.

A few years ago, Planned Parenthood was asked what their physicians would do if a baby was born alive, and breathing.

There is no way the pro-abort crowd can honestly say they’re not arguing for the right to murder.

I thought they were the National Abortion Rights Action League?
No matter they’re still wish to compel abortions.

I noticed they used the term “mother” to refer to the pregnant woman in their first tweet. I did not know that it was possible for a woman to be a mother of something other than a person. Or is it that your are only a potiential mother until after the fetus becomes a person, which may not necessarily happen when you are successfully born. Gawd this liberal logic is confusing.

Yeah, if they wanted to be consistent (HA!), they’d have used “host”.

That would be the language of parasitism. A “parasite” is what some idiots call a human being who just hasn’t been born yet.

There really are no depths that the Coven Of Death will not plumb.

The silver lining in the extremity of the Left is that the more they push their unrelenting agenda, the more the mask slips. This makes it all the easier for us conservatives to say “I told you so.”

Now, if only people would wake up and smell the coffee, instead of drooling over “Dancing with the Stars” or some equally vapid diversion ~

I’m pro-abortion, but silly me, I thought NARAL’s position would have been that “pro-choice” meant for the pregnant mother, not for any random idiot with a weapon.

Personhood, fetus, baby, fetal homicide. All just words on a piece of paper for these evil bastards. All nice and sanitary and sterile.

It’s only a baby if it’s wanted. I still can’t wrap my mind around the distinction. I think NARAL understands the dichotomy of that position all too well. Evil people.

It is both scientific fact, but, more so, self-evident knowledge, that a human life evolves from conception to a natural, accidental, or premeditated (e.g. abortion) death. Spontaneous conception is a fairytale, and the viability standard is intellectually dishonest. The pro-choice or selective abortion policy that has ended the lives of nearly one hundred million [wholly innocent] human — when they are uniquely vulnerable — lives in America alone is quite literally an unprecedented violation of human rights.

That said, liberal society’s selective-child policy is arguably a greater violation of human rights than China’s one-child policy. A wicked solution to a “wicked” problem.

“Republican lawmakers introduced a bill in the closing weeks of the session to give prosecutors the ability to file murder charges in the death of an unborn child — a reaction to the March 18 attack on a Longmont woman whose 7-month-old fetus was cut from her womb and died.”

But if the fetus was cut out of the womb, doesn’t that mean it was “born” in the same sense that a baby delivered by cesaerean section would be?

Anyway, NARAL is taking a page from the NRA playbook here: don’t give an inch when it comes to fetal personhood, regardless of context. Note that I am not saying the NRA is wrong when applying this strategy to gun rights…