Clinton Foundation turns itself in before getting caught

Clinton Foundation turns itself in before getting caught

To Refile Five Annual Tax Returns: “We made mistakes.” 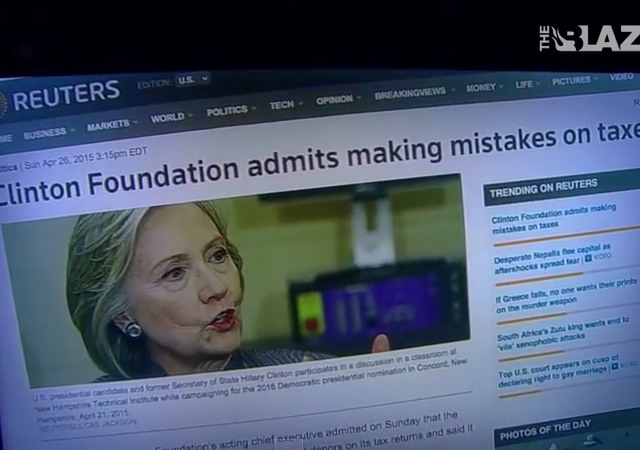 The Clinton Foundation has admitted that it may have made “mistakes” with regard to their taxes and will refile five years of returns.

The admission came after a Reuters report was published on Sunday:

The Clinton Foundation’s acting chief executive admitted on Sunday that the charity had made mistakes on how it listed government donors on its tax returns and said it was working to make sure it does not happen in the future.

The non-profit foundation and its list of donors have been under intense scrutiny in recent weeks. Republican critics say the foundation makes Hillary Clinton, who is seeking the Democratic presidential nomination in 2016, vulnerable to undue influence.

After a Reuters review found errors in how the foundation reported government donors on its taxes, the charity said last week it would refile at least five annual tax returns.

“So yes, we made mistakes, as many organizations of our size do, but we are acting quickly to remedy them, and have taken steps to ensure they don’t happen in the future,” Clinton Foundation acting Chief Executive Officer Maura Pally said in a statement.

Watch Dana Loesch of The Blaze discuss the issue with Dinesh D’Souza.

The Clinton Foundation’s finances are so questionable that non-profit experts are calling it a slush fund.

The Clinton Foundation’s finances are so messy that the nation’s most influential charity watchdog put it on its “watch list” of problematic nonprofits last month.

The Clinton family’s mega-charity took in more than $140 million in grants and pledges in 2013 but spent just $9 million on direct aid.

The group spent the bulk of its windfall on administration, travel, and salaries and bonuses, with the fattest payouts going to family friends…

“It seems like the Clinton Foundation operates as a slush fund for the Clintons,” said Bill Allison, a senior fellow at the Sunlight Foundation, a government watchdog group where progressive Democrat and Fordham Law professor Zephyr Teachout was once an organizing director.

Sean Davis of The Federalist makes an excellent case on this point:

In 2013, The Clinton Foundation Only Spent 10 Percent Of Its Budget On Charitable Grants

More than 88% of our expenditures go directly to our life-changing work: http://t.co/5BrnpBtIp6 pic.twitter.com/GoKfRE9rKq

There’s only one problem: that claim is demonstrably false. And it is false not according to some partisan spin on the numbers, but because the organization’s own tax filings contradict the claim.

Democrats were very concerned about Mitt Romney’s taxes in 2012.

Need to know WHO exactly, what individuals, were responsible. Start with the lowly data entry accountant and go all the way to the top.

Unlike to find any Clinton fingerprints on the worksheet printouts, but having Mrs. Clinton testifying under oath will be enlightening.

Not to worry. I’m sure Obama’s IRS will go after the Clinton tax cheats with the same type of vigor that they went after law-abiding conservative taxpayers . . . .

…and said it was working to make sure it does not happen in the future.

…and said it was working to make sure it does not get caught in the future.

Reminds me of when Eric Holder changed his statement AFTER he perjured himself during the Fast & Furious congressional hearings.

I would have no doubt whatsoever that that the devious, lawless and power hungry Clintons are even using their daughter Chelsea as the innocent (and unwitting) front of their corrupt foundation.

What do you get when you cross a crooked Politician with a crooked Lawyer?

Oh no. I disagree.

From looking at her prior positions of employment and her current statements as an officer of the Foundation, Chelsea is as dirty as Bill and Hillary are.

I say it’d do wonders if the political class saw the whole trio, especially Chelsea, wind up in Florence Supermax.

Yep, sweet little Chelsea has learned well from mommy and daddy that the world is chock full of funny money and all you have to do is scoop it up with your grubby little paws.

Take for example her ‘job’ at NBC News where she was paid $600K a year and they couldn’t even put her in front of a camera because she drove the viewers away screaming, holding their ears and pouring bleach in their eyes.

And yet Shrillary is going to run on a populist agenda. Gawd, Dim voters are some ignorant fools if they vote for that lying hag and her corrupt clan.

Uh, no. They did NOT “turn themselves in before they got caught.” They got caught by an investigative journalist. Now they’re trying to spin the narrative and you’re helping them succeed with headlines like that.

Good grief…!!! If you’re gonna pull a number out your ass, it should be SOMETHING like credible.

This is CRAZY! ANY. Body. Knows. Better.

Heh. Well said. But of course the question is: WHOSE lives are being changed? With the Clintons it all depends on what the definition of is is.

Excellent point. Their “life-changing work” may relate solely to themselves and a few everyday, ordinary oligarchs.

Hey, everybody needs a friend sometimes. And it’s really cool when they can pay for one…!!!

“So yes, we made mistakes, as many organizations of our size do….”

This sounds eerily familiar – in fact, much like Bernard Madoff’s statement to the court during his sentencing.

Last time I checked most “organizations of our size” employee or contract with very sophisticated accountants or accounting firms. I really don’t think their using Turbo Tax.

If I did what the foundation did there would be criminal charges. Who is being charged here?

Gosh, I hate it when that happens to me! I remember the last time I made “mistakes” on several years worth of taxes, and the IRS graciously allowed me to just re-file them! [/sarcasm]

Mistakes, I’ve made a few,
But then again, too few to mention
I did what I wanted to do
And filed my taxes with too many exemptions.

I planned each charted course
Each careful step along the byway
And more, much more than this
I did it my way

With apologies to Old Blue Eyes