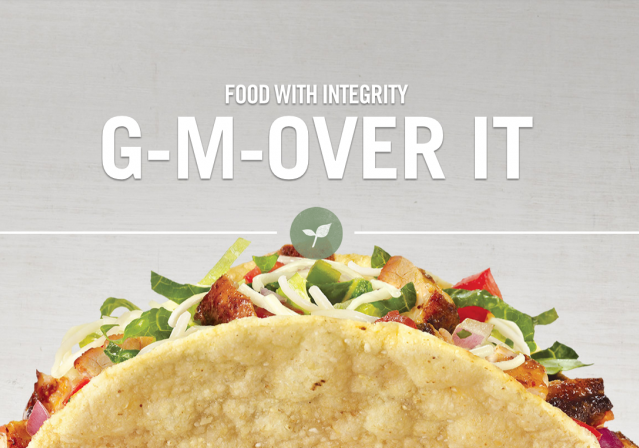 According to the New York Times:

“This is another step toward the visions we have of changing the way people think about and eat fast food,” said Steve Ells, founder and co-chief executive of Chipotle. “Just because food is served fast doesn’t mean it has to be made with cheap raw ingredients, highly processed with preservatives and fillers and stabilizers and artificial colors and flavors.”

Finally! A GMO-free burrito! Oh, do you have gluten-free tortillas? And can I get extra ice in my coconut water? – A hipster somewhere, probably.

Some of the meat and soft drinks they serve? Still chock-full of nasty, evil, ol’ GMOs. Chipotle’s website explains:

The meat and dairy products we buy come from animals that are not genetically modified. But it is important to note that most animal feed in the U.S. is genetically modified, which means that the meat and dairy served at Chipotle are likely to come from animals given at least some GMO feed. We are working hard on this challenge, and have made substantial progress: for example, the 100% grass-fed beef served in many Chipotle restaurants was not fed GMO grain—or any grain, for that matter.

Many of the beverages sold in our restaurants contain genetically modified ingredients, including those containing corn syrup, which is almost always made from GMO corn.

Evidently, this falls outside the bounds of hypocrisy because of a semantical distinction. You see, Chipotle is preparing GMO-free food, though they are still serving food containing GMOs.

Oh, and there’s also the inconvenient detail that corn, a Chipotle staple, is one of the earliest examples of genetically modified food.

Tim Fernholz of Quartz made the corn as early GMO observation earlier today. He pointed to the following passage from Charles C. Mann’s book 1491: New Revelations of the Americas Before Columbus:

[Maize] is like the one redheaded early riser in a family of dark-haired night owls. Left untended, other cereals are capable of propagating themselves. Because maize kernels are wrapped inside a tough husk, human beings must sow the species—it essentially cannot reproduce on its own. … No known wild ancestor, no obvious natural way to evolve a non-shattering variant, no way to propagate itself—little wonder that the Mexican National Museum of Culture claimed in a 1982 exhibition that maize “was not domesticated, but created”—almost from scratch.

…[Scientists] argue that modern maize was the outcome of a bold act of conscious biological manipulation—“arguably man’s first, and perhaps his greatest, feat of genetic engineering,” Nina V. Federoff, a geneticist at Pennsylvania State University, wrote in 2003. Federoff’s description, which appeared in Science, intrigued me. It makes twenty-first-century scientists sound like pikers, I said when I contacted her. “That’s right,” she said. “To get corn out of teosinte is so—you couldn’t get a grant to do that now, because it would sound so crazy.” She added, “Somebody who did that today would get a Nobel Prize! If their lab didn’t get shut down by Greenpeace, I mean.”

Chipotle claims, “all corn-based ingredients in Chipotle’s food that formerly may have been genetically modified have been removed or replaced with non-GMO versions,” but I suppose that depends on how they’re defining “genetically altered.”

Personally, I don’t care if tacos or burritos are dripping GMOs, so long as they’re tasty.

But does it taste good? That is my only question.

I’ll only be impressed if and when Chipotle’s menu is certified paleolithic. I’d be the first customer thru the door for a rack of woolly mammoth ribs.

But I’m all for it. Boobs gotta eat, too. I may even go to a Chipotle one day. Maybe.

Boy, the reasons not to patronize Chipotole just keep piling up.

Oh, now Kimberlee… stop this transparent dissembling. EVERYBODY knows that modifying crops is only wrong when done by evil, soul-less corporations like MONSANTO! As long as it’s done by an indigenous culture it’s Natural and Organic™.

Unless it’s green, as in toxic sludge, the rule of thumb is to consume in moderation, especially processed foods.

Wait until they read up on Canola! We were surrounded by fields of that glorious Canandian G-M-O version of the rape weed this spring!

Henry, that is not what the problem is. GMO represents the laboratory alteration of genetic material in ways that are not natural. Roundup Ready corn and soybeans are an example. There are also many crops which have had alien genetic material inserted into their DNA (such as DNA from bacteria put into a food crop). This historical facts describe selective breeding, not DNA splicing or other lab techniques.

But forget all that – the real issue is whether living things created via labs should be subject to patents.

Hey, all that probing had to pay off some way.

Right … lots of Round-up (glyphosate) resistant weeds evolved “naturally”, even though scientists thought they’d never “figure it out”. It took them about 15 years is all.

And the traits that kill off rootworms basically produces a chemical that is used by organic gardeners, considered completely safe for humans, and means I don’t have to spray pesticides. So only pests that eat the plant get killed, not the bees, for instance. (and we plant 10% “refuge” seed, without the traits, to try to avoid breeding resistance)

These anti-GMO nuts cause harm. Someone says “Frankenfood” and they freak out like they’re at a scary movie.

What you fail to understand is that if you believe in evolution you essentially believe that all foods are GMO.

There is simply not enough movement of DNA across species to account for the high species diversity and complexity seen in nature. There has to be a vector for it and that vector is most likely a virus (sometimes a bacterium).

I am always amused when the anti-GMO types own pets such as French Bulldogs. The poor creatures cannot breed or give birth naturally because of the ay humans have modified their genes to give them that funny appearance.

The owners or the dogs?

I am going to teach myself photosynthesis and then write a book about it and go on Dr. Oz and sell stuff to liberals.

You too can learn the ancient techniques of photosynthesis. These secrets were found in 12,000 year old texts recently discovered in Arizona. These sacred texts were written by the Anasazi Indians in their native language Amquzpoiubauemale.

I have translated these sacred writings into both Texan and English and copies will be available from Amazon for $29.95. But wait…. there’s more. For an additional $9.99 I will send you a map of the 23,495 most sacred Indian sites in Arizona.

Here is a hint. The Calvin Cycle is not made by Harley-Davidson.

They’ll have to replace the corn with Maize, as corn is GM Maize.

Forget maize! Give me some teosinte:

I have yet to see any real tangible evidence that GMOs are harmful.

90%+ of the soybeans and soy products (including soybean oil in many of our foods) come from GMO soy plants.

Now, Monsanto, on the other hand…

But “they” keep putting out these fake reports, which get big play in media, but no big news when they are proven to be just another lie.

I wonder if these same people refuse some of the miracle drugs we have come up with for various treatments. Of course some refuse the vaccines, but only get away with it because we have almost eliminated those diseases in the US.

Corn in the market is also mostly GM, and the whole labeling movement is just designed to freak out the ignorant folks. There is some premium farmers get for the non-GM, and the seed is cheaper. $250 for one bag of corn … that stuff ain’t cheap. The non-GM seed isn’t cheap either.

You mean that tofu is off the menu? Wow!

There are too many restaurant choices these days to spend money at one which endorses leftist nonsense like fear of “GMO” crops.

The FACT is, there is virtually no plant in the mainstream food chain, including grasses, which has not been genetically modified. That’s what Luther Burbank did, following Mendel, etc. Granted, they only used cross-pollination and selective breeding, but that’s all they had available.

And you can’t tell the difference between traits added over time by pollination and those added in a genetics lab. No one can.

It’s superstition, and I refuse to support it with a single dime.

Let me know when they will be Hillary free and I might show up.

Cows eat grass all day, but they come running for the corn with supplements. The best marbled beef isn’t just grass fed, as I understand it.

If I were going to raise ideal beef I’d grass fed them 90% through their juvenile rearing and then switch to a more mixed diet of corn and grass for the adults.

Or we can always make Kobe Lobster. That’s lobster fed an exclusive diet of Kobe beef. (ref anyone?)

It’s been the same early history – the effort to combine positive traits from different plants or animals into one. The effort has always been limited by the science and technology of the time. Over the years it changed, improved of course. But what’s going on in the finest GMO labs of today has the same goal as in ancient history – combining positive traits from various organizations into one organism.

Ultimately, because anti-GMO-ers misunderstand or reject the science, often willfully, it’s a case of fear of the unknown with a dash of Luddite-ism and a pinch of anti-corporatism.

It’s been the same SINCE early history……