Campaign 2016: A big burrito, with a topping of liberal media bias

Campaign 2016: A big burrito, with a topping of liberal media bias

Sharp observation on Hillary: “We’ve never seen her get a burrito before.” 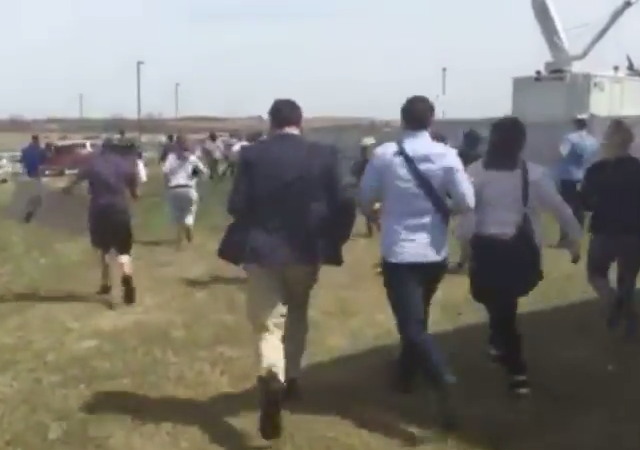 By now, you’ve probably noticed that most of our completely unbiased media is treating Hillary Clinton with the same hard hitting scrutiny they’re applying to Republicans candidates.

Don’t take my word for it. Here’s Chris Cillizza of the Washington Post:

No, the media isn’t biased toward Hillary Clinton. http://t.co/1ud1enCJLW pic.twitter.com/XQTE5ciI7z

According to Cillizza, it’s all in our minds:

Look, I get it. Hillary Clinton is a Democrat. Conservatives have been convinced for a very long time that the media is populated almost exclusively by Democrats who, because they are secretly rooting for that party’s candidates, are willing to overlook things that they would never overlook if it was a Republican. And, there is no Democrat this side of Barack Obama that drives Republicans crazier than Hillary Clinton.

Counter-argument is the absence of the necessity for articles titled "No, the media isn't biased towards Ted Cruz." https://t.co/YLCohUMYpy

When it comes to denial of liberal media bias for Hillary, Mark Halperin of Bloomberg led the way with this tweet:

He later pointed out how amazing it is that Hillary Clinton eats burritos.

Politico followed up with this stunning piece of journalism:

The ‘everyday people’ who made Hillary Clinton’s burrito bowl

The 25-year-old who cooked the chicken that went into the burrito bowl Hillary Clinton ordered at the Chipotle here on Monday makes $8.20 an hour and splits rent with two roommates.

The 29-year-old general manager used to work three jobs and now is thrilled to be able to have just this one.

The young woman who was at the cash register was the only employee on duty at the time who thought she recognized her. She considered asking if anybody had ever told her she “looked like Hillary Clinton.” But she didn’t. It was 1:20 p.m., at the tail end of “peak time,” lunch rush.

Rand Paul is grilled on abortion, Marco Rubio’s life story is questioned, Ted Cruz is portrayed as an extremist and the New York Times analyzes Hillary’s food order at Chipotle.

I think Rush made the best point of all.

What did she put in the tip jar? Nothing!

It was a photo op just like Normandy was and the media ate it up like a burrito custom made to their liking at Chipotle — except they would probably leave something in the tip jar.

This is year to “take down” the “media.”

We don’t see no steenking bias!!!

Bigots such as these always know they are bigots.

They just can’t admit it because their only goal is to CON people!

I’m starting to understand what is behind this constant denial by the media about “bias.” To them it isn’t bias. It is simply normal. Because the vast majority of reporters, editors, producers, staffers, etc., have a left of center towards hard left outlook, their definition of bias is simply different because of the environment they live in. Even outside of their workplace social interactions, I suspect they still mingle with likeminded folks. How many of them live outside of the NYC, LA and DC metro areas, for example? Probably a low percentage. So to them, people in Ohio, Nebraska, Texas, are really “the other.” They just don’t see it as bias. It is how they see life. A sort of ignorant denial.

That’s why Americans by the millions are deep-sixing them!

They think these people are celebrities now just because they fixed a burrito for Madam Hitlary. And now we’re all expected to care about every personal detail of some stranger who just put sauce on Madam’s food.

If that’s not plain ol’ personality cult, then I am living in the wrong planet.

THE most wrong-footed roll-out since ObamaDoggle, featuring a vehicle that looked like a cross between a disabled van and a hearse. NOT a good optic for this stricken old croan.

And the only Iowans she “interfaced” with were party hacks.

One thing, though…she’s doing wonders for the nurseryman. All those plants have to come from somewhere…

A big burrito and a road-trip, huh? Mr. Branco, there’s a good fart joke in there somewhere.

Was Hillary making a “Monica” reference?

Careful now Republicans, you must remain silent, lest you say something stupid about Her Highness and thus become the story!

When was the last time a Republican was given a standing ovation after mocking his latest and greatest scandal?

Richard Nixon had seven minutes of a tape erased and it led to his disgrace and resignation from the presidency to avoid impeachment conviction. Yet Hillary Clinton maintained a private server for government work, deleted messages, and decided what Congress could see and she is still a viable candidate for president. Hillary has hidden the truth about the Libya incident. She had problems with the Rose Law Firm records when she was first lady, they disappeared, then reappeared at the White House. No double standard for Hillary, no media bias. Want to buy a bridge? What the Clintons have gotten away with makes what Nixon did look like nothing.

Truth is never in her vocabulary.
http://twitchy.com/2015/04/17/thats-our-gal-meet-the-totally-random-everyday-american-hillary-just-happened-to-speak-to-in-iowa/

“She greeted my patrons and talked with them,” said owner Diane Bauer. “She was very sociable.”

“It was nice to talk to her,” added Mike Yowell. “She was very personable.”
———–
Hillary Clinton tweeted out a new video this morning featuring one Mike Yowell, a much quoted gay rights activist in Iowa who was on hand at an Iowa diner yesterday and thanked Clinton for coming out in favor of the Supreme Court ruling in favor gay marriage.

Clinton is not filming ads during her road trip, the aide said, adding that the trip will allow Clinton to reap the political benefits of small, spontaneous events without a large crowd or media contingent.

Yeah. Except for the “ad” she just filmed with Mr. Yowell.

There is an up side to a Billary victory; Bubba will make over Moochelle’s school lunch program.

I guess a variation of the Atkins diet will be in vogue again.

I don’t think we have seen her eat a taco either, but Obama said it best can’t a guy just waffle by himself.

Take heart, my friends. The local media are NOT covering for her.

The broadcast version of this story also included coverage of her lie about her grandparents being immigrants.

In Iowa, at least, she is not getting a warm reception.

If that were Iowa, there’d be a sea of red and green ball caps … mostly green …