A deal is a deal. 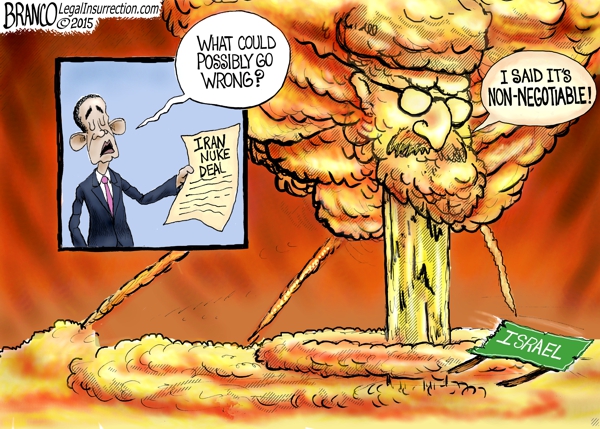 The area is so small that Iran would also end the pesky Palestinian question at the same time.

Hitler alternated a charm offensive with his bullying at Munich. The mullahs used only bullying. Hitler had the good grace to let Chamberlain think he had made a good deal right up to the point of further invading. The mullahs let Obama know he was a chump before graciously accepting his concessions.

As I noted over at my place, Obama was indubitably correct when he said that the world will know about any cheating by Iran. http://rhymeswithright.mu.nu/archives/355917.php

…and the Obami won’t even CONSIDER making a declaration of Israel’s right to exist part of the agreement.

Or the release of American citizens being held by Iran.

Ahem, I’ve been telling y’all for months or longer, obambi is on the other side. Pretty damn clear. Once you accept that, everything else falls in place. Nuking Israel, is for obambi a feature, not a failure.

I have to except to your use of “stupid” WRT Barracula.

IF he were stupid, that’s forgivable. You can’t fix stupid.

Now, this does afford me the chance to repeat Ragspierre’s Theory Of Voluntary Idiocy: Even people of high native intelligence can render themselves idiots by embracing delusions.

When someone does THAT, they are culpable. As is Barracula and sKerry and their minions.

Obama is, in my opinion, neither stupid nor delusional. He wants a Middle East dominated by Iran, and if Iran happens to obliterate Israel some day, he’s fine with that, too. A nettlesome problem eliminated. This “deal” with Iran has probably caused Netanyahu to conclude that Israel must launch a preemptive strike on Iran. Obama would NOT be o.k. with that, of course, but what choice does Israel now have, given that the Iranian commander of the Basij forces has said, on the very day of the announcement of the “deal” that the eradication of Israel is “non- negotiable”? Can one suppose that such a statement did not receive approval from the Supreme Ruler?

Obama is getting exactly what he planned, a nuclear iran.

He is STUPID, however. He does not understand the consequences, like all lefties, he has his own narrative, and if he thinks it, it must be so.

He believes this will make Iran the dominant force in the ME. All it does is guarantee both the destruction of iran and quite possibly most of the ME.

There go Barry and Kerry, “Leading By Taking It Up the Behind” again.

Old habits are hard to break!

So 0bama has made the world hugely safer with this deal … time for a 2nd Nobel [“peace prize”] for the black messiah I say.

Iran, most likely, will announce its nuclear capability when its ICMB missile is on its way towards Israel. Of course, our peace loving President Obama will demand an immediate cease fire while Israel prepares a counter-strike. It comes right down that Obama is very hostile towards Israel, even ignoring his overt acts against Bibi.

We’ve never had a nuclear weapon exchange and that nice condition will disappear when Iran launches its missile towards Israel. Of course, much else shall also change in that twinkle of an eye; Dr. Strangelove would seem to have been benign in comparison. All this thanks to the egomania of our current President Obama; may his name be cursed throughout the world. Obama is taking the world down a path that should not be taken.

Happily, I expect Iron Dome will have been extended into near space, and Iran will have just launched its own declaration of suicide.

Unless, of course, Israel helps Iran shut down its nuklar ambitions in the next few months or years, which I think likely.

Disagree. The Iranians are much smarter than that.

The first notice the world will have of a nuclear Iran is when a nuke explodes inside or directly on the border of Israel (probably on a ship in the port, I’m guessing).

Iran will wag its finger and deny any knowledge and pontificate about it being ‘divine judgement from Allah’.

And, god forbid, another Democrat (or Obama, if it happens soon) is still in office they’ll make a couple speeches about how terrible it is but they just don’t know who is responsible, and shove their heads back into their little liberal bubble and not care.

“Iran will wag its finger and deny any knowledge and pontificate about it being ‘divine judgement from Allah’.”

It will not matter to the Israeli’s. Search Sampson option.

Iran will be left as a glowing ash dump, as will any other ME country the Israeli’s suspect are complicit, may all.

Israel’s not at war! Yes, America went into Irak. How well did that work out?

The big threat to Israel came from obama when he told Bibi that any planes that fly to iran will be shot at when they turn to come home. Israel got the message.

Meanwhile, the saud’s have discovered the iranians in their own backyard! (That’s Yemen.)

The other reality is that iranians are persians. Which means they are non-arab!

The mullahs also rule the iranians through death squads. And, fears of what the mullahs can do. (In Tehran they probably don’t want anyone knocking on their doors at night.)

As to information, Israel remains well informed. (Including Israelis who speak Farsi.)

That Bibi knows obama doesn’t like him? What’s new with that? Bibi’s best tactic is not to respond to obama. Jordan, meanwhile, is only protected because they are swimming in American boots on the ground! (This forestalls the syrians from driving down in tanks.) Israel is also not getting involved in what its neighbors are doing.

Yet, when a shipment from iran was approaching hezbollah, guess what happened? BOOM. That’s the word clue.

Exactly what is obama’s card to play? He got to watch last summer as Israel went into Gaza … and destroyed a number of tunnels.

Libya’s oil delivery system has been knocked out of whack. Syria still needs support from iran just to stay in business. And, the lunacy of the fighting between shi’a and sunni does not seem to be abating. Where is tourism going up? Beirut? Cairo? You think so?

What if Greece has to give up the Euro? You don’t think we’re in for a long hot summer?

Meanwhile, if the democratic party was still alive, you’d see better candidates than hillary. Or biden. Or kerry.

As to “non-negotiable” … “death to America” is said with the same fervor as “death to Israel.”

What’s not in the cards is another nobel pizzing prize. That’s gone now.

Those prizes don’t have the same cachet any more.

And, another thing. iran really doesn’t have a delivery system! There’s a mountain range that separates them even from irak! (And, when irak and iran “went at it” … that couldn’t get further than a stinking stalemate.) Hint, hint, hint. Israeli soldiers are better! They are led better! And, the biggest hindrance still remains “distance.” Going from iran through irak and syria would not be a walk in the park! Heck, Turkey might get mad.

What can Israel do? War game this. Have fun.

Love it. And once the “deal” falls apart in the minds of the public and exposes Obama (once again) for the blithering moron that he is, you can do another one that depicts this “deal” as a couple of US special forces helicopters blowing up in the Iranian desert.

Wouldn’t it be beautifully ironic if Iran was the “straw that broke the camel’s back” and finally exposed Obama for the moron that he is in the eyes of the average American? People will argue for generations over whether Carter or Obama was the worst POTUS ever.

“People will argue for generations over whether Carter or Obama was the worst POTUS ever.”

That arguments been over for about 6 years. Carter was dismal, but he at least loved his country. Obama is worse and hates his country.