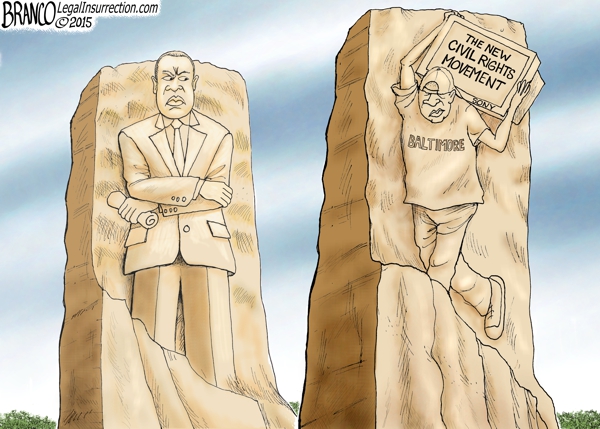 (First impression: the MLK Jr expression should be one of sadness mixed with anger, IMHO…..)

MLK was wrong, period. The color of one’s skin is the ONLY important human characteristic in America today.

Branco has nailed it again.

Corrections needed to the statue on the right to make it more accurate [not politically correct, but accurate]:

5. Need to show a Palestinian-style scarf.

I was going to suggest a flat screen tv. Sadly, I totally missed the Sony lable, but I eventually got it. Spot on.

Most of the Brat Pack attended Santa Monica High School.

My fellow alumni Robert Downey Jr. and Rob Lowe have moved in a conservative direction over the years.

Sean Penn and the rest? Just as dumb as ever. My friend’s younger brother had a few classes with Charlie Sheen and dubbed him the stupidest person he’d ever met. I talked to Sean Penn once and there was nobody home inside his skull.

Good on Robert for pulling the plug on the interview.

You know, the only positive thing I can think of after all this rioting and threats of more (see Drudge’s link about NYC):

This is what got Nixon elected in a landslide in 1968.

I know, today does not have the moral makeup of that era’s population, of the culture, of that time (hippies included). But the majority of people today are DISGUSTED with the breakdown since 2008 of our country.

The questions, in my mind……

-is our election system too far gone, too corrupted (especially since so many illegals are getting voter registrations when they get their SSNs and driver’s licenses)?
-will we nominate someone Conservative who will help get us back on track, recovering and restoring our Constitutional Repubic?
-will the GOP nominate a RINO and kill turnout, thus guaranteeing another Dem POTUS?
-will people get out and vote – or be able to freely vote, in 2016 (the NBPP thuggery of 2008 comes to mind…)?

That’s getting the politics of this wrong several ways.