Blue Bell gets a lot of love from Texas

Blue Bell gets a lot of love from Texas

The beloved Texas ice cream maker might be down, but they’re certainly not out 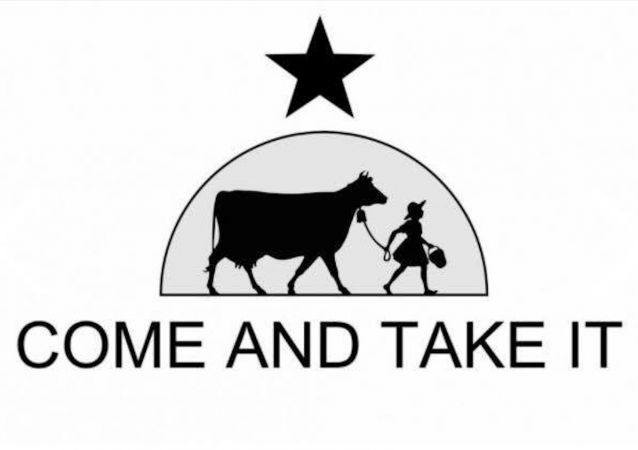 For the longest, Blue Bell was solely a Texas establishment. Their factory is right up the road from Houston. Kids would take school trips to the Blue Bell factory (and I imagine they still do). Everyone grew up looking forward to their seasonal offerings. And Blue Bell was the treat you looked forward to as a kid. Not ice cream — Blue Bell. So when the grocery store is out of Blue Bell, they may as well be out of ice cream altogether.

As my sister observed at the grocery store yesterday:

The massive voluntary recall was the first since the creamery opened in 1907. Closed temporarily, Monday, “Blue Bell Ice Cream will embark on an intensive cleaning program while it simultaneously conducts a new training program for its employees at all four production facilities with locations in Alabama, Oklahoma and Texas.”

Our employees are working hard to bring Blue Bell back. Here’s their message for you:

But “Support Blue Bell” day didn’t end there. According to Houston local news, “hundreds who gathered at the Washington County courthouse wore old-fashioned ice cream parlor hats Saturday morning as part of a rally and prayer vigil to support a century-old pillar of their community.”

If brand management experts are correct, Blue Bell loyalists will flock back to to their favorite creamy confection when it becomes available once more.

“The fans will stick with them and come back maybe even stronger than ever,” if the company continues to be open and proactive, said Josh Feldmeth, chief executive of Interbrand North America. “They’re in growth mode. I think their challenge will be to reintroduce themselves to people who are hearing about Blue Bell for the first time through this crisis.”

Zero in on consumers in the South, and Blue Bell moves almost shoulder to shoulder with the big boys in terms of overall brand performance. Based on strong sales in its core market, Blue Bell said it has grown to become one of the top three ice cream makers in the nation, even though it is sold in only about a third of U.S. grocery stores. For a regional brand to “sit as close to and be as highly held as Ben & Jerry’s or a Häagen-Dazs is a big deal,” Peacock said.

And that will make a big difference as the brand attempts to woo consumers.

“People who are close to the brand and are familiar with this brand really love this brand,” he said, adding that Blue Bell will have “a degree of forgiveness that a lesser brand would not.”

“If you have limited experience with a brand, you may start to believe, ‘Well, this is a brand I have to be careful about,’” he said.

And that whole corporate responsibility thing? Blue Bell seems to be nailing it there, too.

While some called for even more transparency, most praised president and chief executive Paul Kruse (pronounced crew-ZEEH) for launching new safety steps and explaining those steps to the public.

“They are stepping up and taking responsibility,” said former Plano resident Tammy Katz, who heads Katz Marketing Solutions and is an adjunct professor of brand management at Ohio State.

“From everything I’m seeing it looks like they’re behaving quite ethically and responsibly. You are in crisis mode, and you are focusing on doing the right thing for consumers.”

Even the company’s total recall, which followed three smaller recalls, was a “massively good thing,” said Interbrand’s Feldmeth, who is also a fan.

“Your brand heritage is: quality ice cream done the right way. When one problem occurs, we’re going to shut the whole system down till we get it right. We’re not going to chance it,” he said.

“And if you’re a Blue Bell fan, you respect that.”

The move, which essentially dropped the company’s revenue to zero, showed that Blue Bell was willing to put customer safety ahead of profits, some said. Also, from a strategic standpoint, it ended the increasing number of recalls — one, followed by another, followed by another — saving the company from possible death by a thousand cuts.

Why didn’t I see this coming? Anybody have a half gallon of vanilla for sell?

I grew up with Hill Country Peach and Peppermint Stick. They will be back.

For those who don’t want to click through: “Let me break this down for Northerners who can’t understand the tragedy of recent events; The Blue Bell recall doesn’t mean we’re down a brand of ice cream. We don’t BUY other brands of ice cream.

The Blue Bell recall means WE ARE OUT OF ICE CREAM.”

When we first moved to NC from Texas we had family members send me a few half gallons packed in dry ice. BB finally made it here about 7 years ago – but still hasn’t taken the market, thanks mostly to the buyers at Harris Teeter. I’m just hoping this incident doesn’t result in their leaving this market. Gotta have their Cookies N Cream and Homemade Vanilla!

If you ever get the chance, tour a Blue Bell plant.

Oh, and THIS is how you do crisis management. They’ll be back, strong as ever.

Out my way, it’s either Tillamook, Umpqua or Bust.

Addictive as crack I presume. What sort of pie does it taste like?

Marionberries are a local (Northwestern) variant of blackberries. The flavor’s slightly different, but “kinda like blackberries” is a decent enough starting point.

Umpqua makes the best Cookies ‘n Cream ’round these parts, though.

one improvement they could make is to drop dyes from their ingredients.

Never seen anything special about Blue Bell. Tastes like any other ice cream to me.

So you think all ice creams taste the same? Poor guy, I guess you should just stick to your granola and the like then.

I live in the Columbus, Ohio area, and we have a relatively new brand called “Jeni’s” which is sold mostly in their own shops. It is expensive, but highly creative (examples include Salted Goat Cheese, Brambleberry, and Lambic [made from a Belgian cherry beer]). They too have closed and pulled all stock from shelves over the past 4 days.

I know that the Jeni’s listeria test was done in a lab in Nebraska. I know enough about lab testing to be aware of false positives. Not making any accusations, but the test labs need to be thoroughly vetted.

Yeah, but how do they feel about the gays?

As for whether or not the creamery tours still happen, yep. My youngest toured the place(again) on April 11th after the Blue Bell Fun Run was over. She had a blast.

I love the stuff. Moo-llennium Crunch my favorite!

I have some catching up to do!