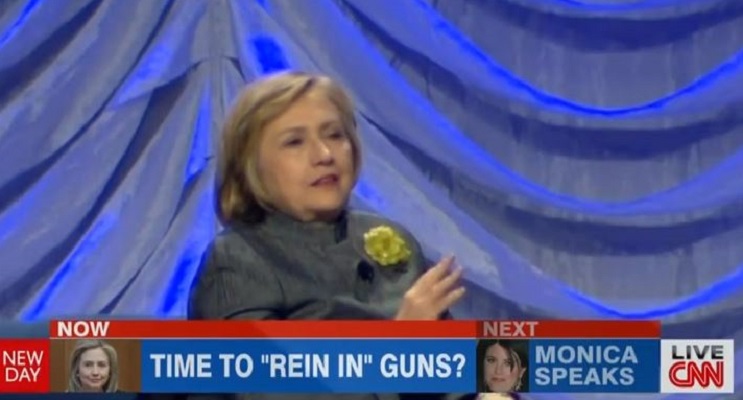 Hillary is set to announce her presidential run today.

At the same time, former Mayor Michael Bloomberg is holding one of his anti-Second Amendment events and the NRA is holding its annual meeting.  Hot Air reports:

The well monied former New York mayor and head honcho of Everytown for Gun Safety is holding his own event in Tennessee to focus attention on politicians who aren’t willing to sign on to ever increasing restrictions of the rights of gun owners.

This is just the sort of attention that Democrats are not eager to bask in.  According to the Washington Times:

The near unity among Republicans on gun rights contrasts with the Democratic divide on the issue, underscoring how the politics appear to have swung in the GOP’s favor.

“It is a loser for the Democrats and so they shy away from it — except in Washington, D.C., or New York, where they have a strong liberal constituency and where it is not going to cost them votingwise,” said Robert A. Levy, of the libertarian-leaning Cato Institute.

Given Hillary Clinton’s statement about gun owners being a “minority” and acting like “terrorists,” Bloomberg is probably not winning any points in the Clinton camp by highlighting the left’s gun control agenda.

The following CNN clip from last year highlights the problem for Hillary:

At least we may have a chance to get our furniture back.

The Bloomberg-sponsored “Moms Demand” protest rally in Nashville was apparently… a little underwhelming.

This is an implicit lie. There is no “Democratic divide” respecting the Second Amendment.

They want you and I defenseless and dependent. It’s that simple.

That’s worth a read.

Haha, I meant to hit reply and looks like I hit thumbs-down. Ironic, given this:

Anybody not reading every word that Charles C.W. Cooke writes is cheating themselves. And that most definitely includes his recently released book, “The Conservatarian Manifesto” (http://is.gd/as4nPl).

This British ex-pat who is just a few years shy of US citizenship (and a total gun nut) writes more beautifully (and dare I say lovingly) about America and our Constitution than do most Americans who love our country and the Constitution.

EVERYTHING is going to hurt this moron’s campaign.

How about, “You didn’t build that?”

The only original thoughts Hillary Clinton has had was in thinking about ways to use positions of the highest public trust to steal for herself. Even then, they weren’t so original. People have been getting lined up and shot by the Chi Com government for decades for doing the same.