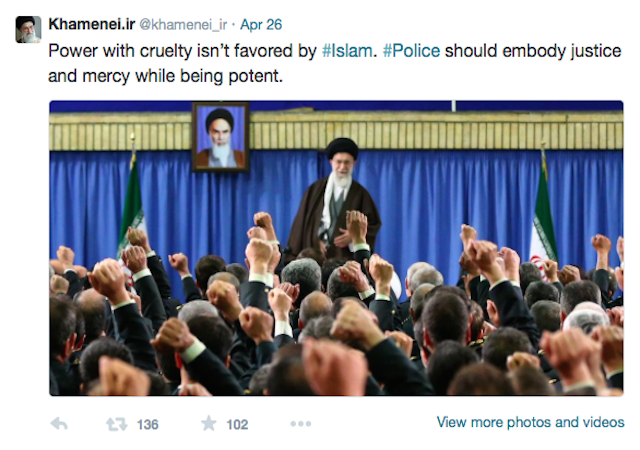 We are head-first through the looking glass, people. The Ayatollah of Iran is trolling us on Twitter:

Addressing the 20th annual General Congress of Law Enforcement Forces (LEF) Commanders and Staff on Sunday, Iran’s Supreme Leader criticized American police, saying their “authority is wrong and oppressive.” Khamenei took to Twitter to rail against U.S. law enforcement who he says utilize “power and tyranny” to “kill innocents” amid ongoing riots over the death of Freddie Gray in Baltimore.
…
Khamenei, who is a Muslim Cleric, touted the religion of Islam for its balance of mercy and justice.

“Power with cruelty isn’t favored by #Islam. #Police should embody justice and mercy while being potent,” he tweeted.

Behold, the power of the internet:

Power & tyranny are different. In some countries like US, police are seemingly powerful but they kill innocents. #FreddieGray #RekiaBoyd

On false pretexts US police shoots ppl on streets. This is a type of power which doesn't ensure security but leads to insecurity. #MikeBrown

It's ridiculous that even though US President is black, still such crimes agnst US blacks continue to occur. #BlackLivesMatter #FreddieGray

Even abolition of #slavery in #US wasn’t based on humanitarian intents but on North-South wars & conflict b/t landowners & industrialists.

Just as a point of reference, I’m 29. I grew up in the internet era, got my first e-mail address in the 7th grade (ish?) and was a Facebook pioneer during undergrad. I embrace Reddit and follow celebrities on Instagram and still, it will never ever ever stop being bizarre to see world leaders—especially world leaders who regularly mull over the destruction of an entire people—troll each other on Twitter.

The real takeaway here isn’t that the Ayatollah is an infamously, belligerently dangerous troll. The takeaway is that, over the course of the past year, the messaging coming out of Ferguson that wound its way through cases in New York, South Carolina, and now Baltimore, has become so pervasive and normal that the Ayatollah of Iran is using it as a weapon against the United States on the international stage.

He’s using our own insanity against us—and knowing the state of the world, it’s probably working.

In some countries like US, police are seemingly powerful but they kill innocents

Even at its worst, the Democratic Plantation is three orders of magnitude better than the mess the Ayatollahs have made of Iran.

Notice that in this case, there is agreement across the political spectrum in America, that the police officers must answer the family’s questions about how that young man, Freddie Gray, died in their custody, regardless of whether they suspected he was a drug-seller.

PS, I followed the Egyptian demonstrations on twitter, and was amused to find out that any statement about Egypt from an American politician (including Senators and Congressmen) was nearly instantaneously and broadly transmitted, and the statements from Iran never got any attention, at all. Iran’s statements are not important to the rest of the world, and they should only be some information about Iran’s intent, to us.

Gray was dragging his and legs when they put him in the van. The cops may have assumed that was resistance, because some arrestees do feign the dead weight to make it harder. So it is possible his spine was snapped in the initial take-down. Suspects scream and claim pain and injury all the time, police are too used to it to investigate every one.

Most interesting is how the investigation is going. Who is even conducting it? In South Carolina, all local police shootings are automatically investigated by SLED, the state police. They conduct them in strict secrecy, but make public their full findings when done.

Iran executes homosexuals for the crime of existing (but the cops there probably bake them a nice cake first).

The same sort of stupid sap who believes Obama and Hillary probably believes the mad mullahs, too. One big unhappy family.

Gray had a big rap sheet already and was out on the streets slinging more drugs when he should of been on bedrest after the surgery on his spine.

No idea why he was even out there doing MORE criminal activity when he already had a fat paycheck coming from an insurance settlement.

In any case, its another excuse for them to riot and loot.

I’m still waiting for them to try and do this somewhere like Texas. I’m reaaaaaal interested in seeing what happens.

Oh good grief, more Nuthouse conspiracy theories to justify their deeply-held belief that every white cop is on the side of the angels and that every black victim probably deserved killin’ anyway?

For drug offenses. Which generally don’t justify being put to death. And hey, unlike the cops involved here, he at least he never killed anyone.

and was out on the streets slinging more drugs

What surgery on his spine? Yeah, no, that Nuthouse theory has been debunked.

when he already had a fat paycheck coming from an insurance settlement.

Yeah, no. The princely sum of $602/month for having been permanently damaged by lead poisoning as a child; which would have been “a fat paycheck” of all of $18,000 had he gone through with trying to get it all in one lump settlement. Not exactly a lot for a life permanently damaged; especially not enough to “live large” as you’re implying.

This is exactly why Nuthouse-generated theories should stay in the Nuthouse. It’s embarrassing to see them infect otherwise sensible blogs.

In any case, its another excuse for them to riot and loot.

We should be deporting all the rioters to Iran, it would be interesting to see how long it would take Iran to dispatch them.

Am I the only one who thinks these tweets are not actually from him?