Cheaters might prosper, but sometimes they end up in jail 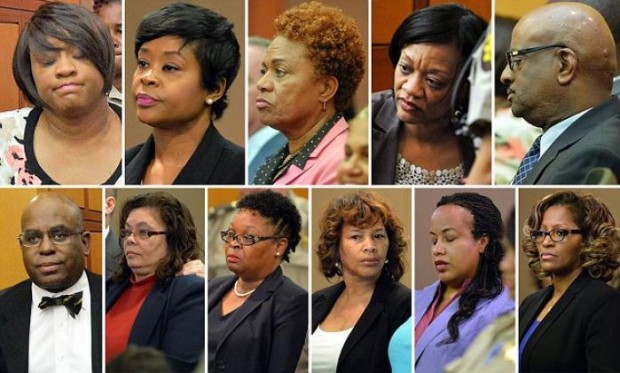 The Atlanta educators who were convicted on April 1 of racketeering and other charges related to purposely inflating test scores in poorly performing schools were sentenced in the Fulton County Court today:

One by one, they stood, alongside their attorneys, before Fulton County Superior Court Judge Jerry Baxter.

In this system, a jury decides guilt or innocence, the judge metes out punishment.

Throughout the five-month trial, Baxter has been pointed. Until Monday, he said he planned to sentence the educators to prison. When verdicts were reached, he ordered them directly to jail.

But on Monday he changed his mind and decided to allow prosecutors to offer them deals that would have allowed them to avoid the possible 20-year sentence that racketeering carries.

One would think if offered the chance to accept a deal and avoid jail time, a person would take it. But that didn’t happen and the situation changed fast:

And that’s why there were sparks when some of the educators, flanked by their attorneys, did not directly and readily admit their responsibility.

Baxter was not pleased. He raised his voice numerous times and shouted at attorneys. Some attorneys shouted back. At one point, one of the defense lawyers said he might move to recuse the judge and the judge retorted that he could send that attorney to jail.

“Everybody starts crying about these educators. This was not a victimless crime that occurred in this city!” Baxter said.

The sentences handed down for some, were not light:

“Everybody knew cheating was going on and your client promoted it,” Baxter said to an attorney representing Atlanta Public Schools educator Sharon Davis Williams, who Baxter sentenced to seven years in prison.

Davis Williams was ordered to perform 2,000 hours of community service and pay a $25,000 fine.

All of those convicted were sentence to some time in jail, anywhere from one year to seven years. All of them were fined anywhere from $1,000-$25,000 and all were ordered to perform 1,000-1,500 hours of community service.

The judge in the case, Jerry Baxter, was so angered by what he learned during the trial, that he ordered all of the defendants directly to jail upon their conviction.

The cheating went so far as to hold “cheating parties” and to have teachers change answers on students tests. Some allegedly used the cheating as a means of inflating bonuses and to enhance their careers.

Now…let that be a lesson! 🙂

That’s the bad news. The good news is they have a long time to do their home work.

IMPORTANT QUESTION about this case:
Two or three years ago there was another case involving a large national media company and the entire educational system (K through 12) of a state. The publisher was caught “COOKING THE BOOKS” or numbers on Outcomes Assessment results.

If Obama had a Department of Education I imagine they would look, act, and react just like this crew.

They got jail time AND community service?

The really frightening part of all this is that what APS was piloting that created such poor results with at risk, urban school kids that they had to cheat to cover it up was the New Standards Project launched back in 1996. NSP is now better known nationally under its new name–the Common Core State Standards.

What APS was missing was performance assessments. What the Common Core financed upfront back in 2009 as part of the Stimulus Act were those performance assessments. The day the APS cheating scandal broke Bev Hall and many of these now sentenced were out on the West coast meeting with the Gates Foundation to nationalize these practices and pedagogical philosophies. Obama still wanted Hall on his IES Board guiding K-12 education research even after the scandal broke.

Right now many education commentators are falsely using these convictions to impugn any standardized testing. Using the convictions to hasten the very remedy Bev Hall and these administrators wanted all along.

http://www.invisibleserfscollar.com/using-the-common-cores-performance-assessments-to-create-a-new-kind-of-person/ explains performance assessments. It’s all about behavior and is not about facts or the transmission of knowledge anymore.

These people came very close to getting away with a great fraud that was largely duplicated in urban schools all over this country. As I explained to a Ga legislator who asked me why “because ignorant and aggrieved is politically powerful in a voting bloc.”

When will somebody complain that all these photos are RACISSSSSS?

They’re all black. RACISM. Nine are women. SEXISM. None are white. PRIVILEGE. All are registered Democrats. NO SHIT.

RE: “All are registered Democrats.”
I believe that for sure!

There are literally tens of thousands of kids who have been victimized by this crew. Nobody in any Conservative organization has ever done anything like this to even one kid, and it would be unthinkable to us.

Thing is, this is one…of many…glaring examples from around the country. The difference being that the many, many others are less obvious and notorious.

But the destruction of America’s children’s potential is all the same. It’s an awful theft, and it should break our hearts.

…and piss us the hell off.

Yes Obama/Holder/Sharpton … lets have this discussion about race. America is indeed cowardly (as our top racist cop called us) if we don’t call out the black grievance industry.

Blacks are held back by lowering standards for them, and always giving them an alibi for failure. Promoting students or workers, based on race rather than performance, weakens them.

And it wouldn’t matter if the teachers doing it were white, but it seems likely to me they thought they’d get away with it because of the “Sharpton/Holder/Obama Way” … it’s OK for blacks to cheat … because … slavery happened once upon a time. “You deserve reparations and more” they wrongly claim.

And that affirmation tends to delegitimize all those “minorities” that succeed on merit. It’s interesting that one of Obama’s few recorded writings is in response to an Asian complaining about affirmative action, and its deleterious effects.

I put “minorities” in quotes, because WASPs are a minority globally, yet “we” founded the most powerful country in the world. “We” also freed the slaves. Should that be the culture that is studied and admired, based not on color, but on culture?

And yeah, we got much of that from Judaism, maybe mixed with some Greek stuff … but the point is … how did success happen? Not … grievance industry, lets codify diversity, to be more like the failures.

11 “educators” who still don’t get it. 11 lawyers who most likely gave their clients some very bad advice. Thousands of children robbed of a proper education. Too bad they could pass judgment on Bev Hall as well.

My grandfather was prominent in the community, and a member of the school board. My mother had been a star pupil through high school. When her younger brother came along, everybody “knew” he was a genius, and his teachers gave him As, no matter what he actually deserved. My mom noticed this, and tried to warn my grandparents, but got nowhere.

My uncle graduated from high school with fine grades, went to college, and promptly flunked out. He was unprepared. My mother was disgusted with the disservice the teachers had done to her little brother. It affected his job prospects and pay rate for decades.

Grade fraud is a serious disservice to the affected students. Some of them will never recover.

Good they deserve to be in jail. They can do their community service in jail by teaching GED classes to other inmates.

I’m a teacher myself–yeah, I know that my profession can always be depended on to vote for the increased bureaucratization and stupefaction of American education.

One of the things I see is that roughly one academic quarter’s worth of instructional time is lost every school year because of high-stakes, standardized testing. Teacher performance is often measured by the i-dotting and t-crossing of student learning objectives and other exercises mandated by various levels of local, state, and national bureaucracies where people justify their continued employment by writing more and more regulation for those actually trying to teach. And, finally, any issue with student discipline needs to go through several steps and layers of administrative oversight (yes, this is chiefly to avoid lawsuit, and, hopefully, to avoid abuse of the young–but the law of unintended consequences further burdens the classroom teacher and any students trying to learn).

Further, while much of the population I teach is made up of English language learners, I find that there is even a large, English-speaking and native-born population which, in high school, cannot put together a coherent sentence or interpret a map. Teaching history, I have even found that many cannot tell me how long someone lived simply by subtracting his year of birth from his year of death! I end up teaching a number of things that I learned in elementary school to kids supposedly ready to graduate high school and move on to either college or careers.

I understand there are cases where people sued school systems for failing to educate them. I wonder if these were the same kids who drove teachers bonkers over attendance, deportment, and a host of other issues unrelated to learning content?

Further, we as a society support a “culture” that disparages everything its forbears (read, the people who built the thing and made it work) saw as virtue and we honor everything that wad traditionally a vice.

No wonder education is going down the tubes!

Sounds like maybe some of them were represented by lawyers who were their former students. Karma knows no race.

Though never mentioned I would hope that after serving their time that none of these evildoers will ever be able to hold a teaching position anywhere ever again.

I live next to Atlanta and the opinion here is that this gang did this cheating for one reason and that is money. In fact when they said they did it for the kids it is the exact opposite. Graduating kids that are not ready for college is not a favor to them. This was pure greed and don’t let anyone tell you differently.

I would add that many of our colleges aren’t worth anymore than the public schools are now.

This country has been destroyed from the inside out, and I no longer see a way back. No standards and political correctness, both foisted on us by the left, have won the day. They govern all institutions and much of the private sector as well.

These malignant clowns are just the tip of very, very big iceberg.

Most surprising is that none of them got charged with sexual predation of their students.

Rigged Greed 101. All Democrats take this course from the ‘other’ Chicago School of Economics.

I do not understand the prison terms.
We have a president who lies about EVERYTHING. His lies result in deaths and maiming and now also the possibility of nuclear war in the middle east.
Why is he given a pass.

As far as I’m concerned, they got off with light sentences.