A crime against humanity 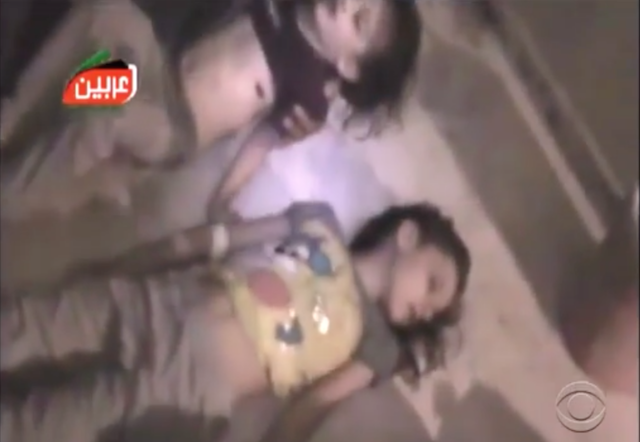 Two years ago, over 1,000 people died in Syria after sarin gas was unleashed on civilian neighborhoods in Damascus. No one has ever been held accountable for ordering the attack, but among those who have followed the violence in Syria there is little doubt that all the evidence points to President Bashar al-Assad.

60 Minutes correspondent Scott Pelley’s “A Crime Against Humanity” aired on 60 Minutes yesterday evening alongside never-before-seen footage of the 2013 sarin gas massacre. The segment throws into full relief what words like “extermination” really mean in a modern context. Pelley spoke to a man named Kassem Eid, who was in Damascus when the rockets hit the ground:

Nobody knew what was going on. People were just praying for God to have mercy on them. Sir, I’ve seen things you only would dream about in your worst nightmares.
…
I felt like my chest was set on fire. My eyes were burning like hell. I wasn’t able even to scream, or to do anything, so I started to beat my chest really hard…trying to take a breath, just to be able to take a single breath. It was so painful. It felt like someone was tearing up my chest with a knife made of fire.

After the segment aired, Pelley took to the interviewee’s chair to defend his reporting, and his decision to release the graphic footage:

In the extended cut at around the 10 minute mark, Pelley interviews a woman who managed to escape the attack. She tells him, “I lived, by God’s will…but I wish I had died.”

This is real. This is what we’re up against.

Watch the videos. Share them—accountability has to start somewhere.

And the alternative is what?

And who enforces the alternative?

The politics of the middle east is medieval. Tribes are functionally equivalent to warring city-states. That doesn’t mean they can never improve, but it does ask the question, how and by what process.

And the alternative is what?

Bashir Assad’s strategy all along, probably following Russian and/or Iranian advice, has been to make the alternative be the most radical extreme Islamicists.

If anyone is waiting for Teh Won to act, they will be dead long before he finishes his latest round of golf.

“How” is massive military strikes against the regime in power.

The “process” is target every member of the regime personally regardless of the co-location of their family. Then advise all military members, from commanders to privates, that if they utilize WMD, they will be personally targeted as well.

Monitor every round and rocket fired, if it is an unconventional munition, pound the grid-square it was fired from to dust and track-back to the barracks, installation, supply point, every damned patio that the unit members had a meal on in the past week, and pound it to dust as well.

The way to defeat a barbarian quickly, is to become a barbarian. If you don’t, defeating them can take forever.

I don’t think you understand how military technology works. It’s not possible to monitor every single missile launched, nor is it easy to determine warhead contents in a timely manner.

It appears you have obtained most of your ideas about military tech from Hollywood movies. Teal world mil tech is much less precise, much more complex, and takes a lot longer to accomplish anything useful.

Everything in war is very simple, but the simplest thing is difficult. The difficulties accumulate and end by producing a kind of friction. . . . This tremendous friction . . . is everywhere in contact with chance, and brings about effects that cannot be measured, just because they are largely due to chance. . . .

MJN the main problem is that the vacuum of power you’re going to leave by doing that is going to let something even WORSE gain hold (in this case ISIS).

Let? I do believe the main alternative is acting as ISIS’ air force and ensuring its victory against the remnant Syrian state. Because, better ISIS than Iran.

You have to fight them both.

President Obama’s policy is Syria has been to do air raids only against ISIS/ISIL/Daesh/Whatchammacallit reasoning that he is not helping Assad, because they are not not in contact with each other – and they are not.

There’s very little middle ground, but if you build them up and arm them you have a chance.

Also, there are foreign powers that can get involved on the ground:

1) Iraq – which eventually can go over the border

3) Turkey – if it wants to, or wants to avoid Kurds pccupying Syrian territory.

4) Lebanon – anything not affiliated with Hezbollah. This is permitted by a 1991 treaty.

6) Israel, for territory near the Golan Heights.

Even mercenaries paid for by Saudi Arabia.

Dead is dead, and there are very old, very conventional ways to get dead that are as bad as any gas attack.

This is what you get from a “smart diplomacy” that starts with magic thinking and ends with millions of dead people.

And it’s just really getting started.

The Middle East is the center of nearly all the violence on this planet. They are living medieval lives, and values (for the most part), with modern weapons and technology. A horrible mix.

We, the USA, are not able to remove all dictators and replace them – especially when the people of these nations don’t have any love or respect for anything other than Islamic rule, Sharia law, and mullahs who establish (i.e. put or allow) the Assads of this region in positions of power.

As a nation, our place is to stand with Israel, our ally, and to do all we can to aid them in their self-defense. All IMHO, of course.

Westerners just can’t get their head around the barbarity that still exists in many places. The “academic” atheist Marxist fails to appreciate and account for the fact, that America raised them in the womb of Christian oriented culture and values. Every time they throw a hissy fit anti-America protest, they depend on their targets being totally civilized, as they smash things, beat drums or poop on cop cars.

Seeing the world that emerges when Western power leaves reveals a lot. But the leftists still claim they are only so violent because of our intervention, as in Iraq. But was the Armenian genocide of 1.5 million early last century our fault? Is it our fault for buying their oil and making these tribal nations wealthy simply because they sit on oil? Yeah, those crusades … where we weakly fought back the murderous Mohammad and his hordes after they had slaughtered their way to Spain.

Between the Sharia of Islam and the Gulags of communism, how many 100’s of millions are dead or have lived under persecution? Do we really need to be more “diverse” and accept all cultures as equal? How many millions of fleeing immigrants do we need to welcome across our borders, before we realize most will have to “live free or die” in their own land?

All that context needs to be taken in to understand why we had ties with Mubarak and Gaddafi. And what “friends” do we have there now, after years of Obama and Hillary transforming our foreign policy? But they want to keep our borders open, and Hillary wants to keep taking that foreign cash.

But was the Armenian genocide of 1.5 million early last century our fault?

No, it was Germany’s.

In 1915, there wasn’y any crime Germany was not prepared to commit or promote to try to win the war.

There is also little doubt that the rebels/terrorists (e.g. ISIS) launched the attack using foreign sourced-arms and locally-sourced WMD. This report sounds like Kosovo-like speculation designed to establish an Islamic state, not in Europe, but in the Middle East.

among those who have followed the violence in Syria there is little doubt that all the evidence points to President Bashar al-Assad.

I have to disagree. More than a few observers have suspected that the rebels staged the attack in order to force Obama’s hand, and become a belligerent actor.

Frankly I trust very little “journalism” coming out of that region. Do a little research on Pallywood and you might understand where I’m coming from.

I think that is Russian propaganda.

“there is little doubt that all the evidence points to President Bashar al-Assad. ”

people seem to FORGET…. Assad was WINNING using conventional weapons at the time.
ALSO… the reports from survivors stated the gas had a horrific smell. THAT IS NOT WEAPONS GRADE GAS. The last thin you want… is survivors… and if they can SMELL IT COMING… its going to have survivors…
This is “kitchen sink gas”…. and it’s use AND the neglect of on the ground and historical data( was winning w/ regular force…) indicates someone is trying to paint Assad…
Don;t be fooled by 60 minutes tripe. Even Sean Hannity overlooks these points…