You Can’t Say That About Hillary Clinton!

You Can’t Say That About Hillary Clinton! 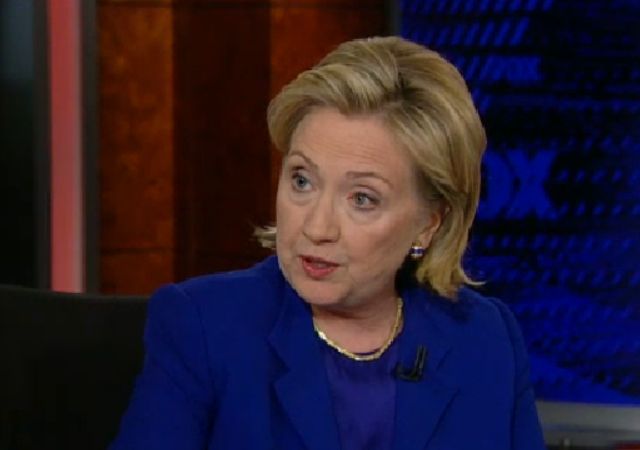 You’ve probably already heard about Hillary Clinton’s “super volunteers” who are sending warning letters to reporters about using language they deem to be “coded sexism.”  This “HRC Super Volunteers” group apparently began back in 2007 as a Facebook group devoted to ending sexist reporting on Clinton.  Apparently, they are still active and waging war against sexist language regarding Clinton.  The Washington Post reports:

Hillary Clinton has been in the public eye for a very long time, which means much has been written about her — including quite a few adjectives. But some of these adjectives are now off-limits.

That’s according to the Clinton “Super Volunteers,” who have promised to track the media’s use of words they believe to be sexist code words.

So these words are now off the table: “polarizing,” “calculating,” “disingenuous,” “insincere,” “ambitious,” “inevitable,” “entitled,” “over-confident,” “secretive,” “will do anything to win,” “represents the past,” and “out of touch.”

Good thing they warned me. Otherwise I at some point might have called her “insincere” or “disingenuous” — because she, you know, is. Just earlier this week she vowed she was beginning a new, open relationship with the media during a speech and then refused to take questions after it. Oh, and while we’re at it: Using your private e-mail for official government business and pretending it was a matter of “convenience” seems pretty damn deceitful.
But I guess we can’t call her what she is, and the reason we can’t is that she’s a woman. You see how ridiculous it is to consider this a feminist point of view, right?

Of course it’s ridiculous.  In fact, it’s just as ridiculous as establishing a whole new set of rules for political debate and patriotic dissent because the sitting president is Barack Obama.  Having spent the last six years being bullied and accused of “racism” for simply disagreeing with Obama’s “fundamental transformation” of America, I, for one, do not relish the idea of four more years (or eight!) suffering the same disingenuous attacks (only this time it would be “sexism”) simply for having a different viewpoint.
Like the ludicrous “ban bossy” campaign, the idea is to silence and shame legitimate opposition to Hillary Clinton’s policy ideas by policing language for secret “codes,” thus shifting the attention from the reasonable point of debate to an ancillary, unrelated ad hominem attack.  The effect is to insulate the person from any and all opposition, clearing the path for the abuses and lawlessness we see from Obama with increasing frequency.
More Sharing Options

Hawkins started to say something about voting for categories a few days back, and Jonah Goldberg also wrote about that last week.

The point is that most of us would be delighted to vote for a woman for president. That is a category.

I suggest that, until we agree that racism and sexism are behind us, we cannot allow people of special categories into elected or appointive office. The reason being that categories have shown to prevent valid critique of individuals.

If Barracula is immune from impeachment because of his category, we can never make that mistake again until people in that category are as prone to that process as anyone else.

And if you would vote for Ol’ Walleyes because she’s a woman, YOU are the sexist.

I would have been delighted to vote for a woman in ’96, but the Republicans put the wrong Dole on the ballot.

We had your better Dole as a US senator here in NC and about all she did was cash the checks.

If Sarah or Condi were elected to the presidency, would they have the same “immun[ity] from impeachment because of h[er] categor[y/ies]” as Barracula?

I think that is SUCH an interesting question, it would make a very worthy subject for a LI write-up by Amy or Kemberlee.

I’d bet it would attract a lot of comments. My personal opinion is that no “category” individual who was a Conservative would be even slightly immune from due process, and a lot of those wanting to “process” them would be Conservatives if they did anything like Pres. ScamWOW has done.

You’ve probably already heard about Hillary Clinton’s “super volunteers” who are sending warning letters to reporters about using language they deem to be “coded sexism.”

I have, but I dismissed it as a parody. You mean it’s not?

Seriously though – how sure are we that this is for real? It’s getting harder and harder to tell parody and fakery from real life.

Hi Amy, apparently some member of this group sent an email to a NYT reporter named Amy Chozick. WaPo (linked in the piece) includes her tweets, and here’s her first tweet about it on Twitter: https://twitter.com/amychozick/status/580822762647875584

I suppose it is possible that she made it up, though. A little skepticism is healthy these days.

Poe’s law, named after its author Nathan Poe, is a literary adage which stipulates that without a clear indicator of an author’s intended sarcasm it becomes impossible to tell the difference between an expression of sincere extremism and a parody of extremism.

The American Left: Officially Beyond Parody Since 2008 😉

Muggeridge’s Law is: there is no way that a writer of fiction can compete with real life for its pure absurdity.

Especially where the Collective is concerned. When it strains credulity, it is very likely their position.

It’s not. And what this is telling me is this. If she is selected president, she will shrivel up and scream and stamp her feet when Putin calls her shrill, or Netanyahu calls her strident.

The so called list of forbidden words is an accurate description of her heinous.

This reminds me of the White House Order To The World & Especially To Americans: Thou Shall Not Photoshop The Picture Of The President Firing A Shotgun (which lasted about as long as it takes to see who would be first with a photoshop job on it).

I used the first one to show up on twitter. Oh, that was sweet!

So, it appears that these words are allowed, at least by direct inference:
. Older than dirt
. Battleax
. Dinosaur
. Vulgar
. Arrogant
. Scheming
. Uppity
. Creepy
. Privileged
. Low down, mean

Of course, it would be wrong to express any objection to Mrs. Clinton’s candidacy since she’s entitled after all those many years dragging behind her husband, putting up with his many escapades.

Cheers, this will be fun? 😉

All words used by Obama Democrats to describe Hillary in 2008.

Are “criminal,” “cheat,” “felon,” “prisoner,” and “inmate” soon going to be added to the list of forbidden Hillary descriptors?

All words used by Obama Democrats to describe Hillary in 2008!

I know a few choice words to describe Hillary, but the commenting software doesn’t like them.

The Left always restricts speech. They cannot operate indefinitely with free expression. Once they get power and put their policies in place, the failure of the ideology becomes apparent – so their solution is not to allow mention of it.

Anyone who thinks Obama or Hillary would not prefer to be absolute totalitarian dictators just hasn’t been paying attention.

She illegally and unethically deletes emails like a girl.

Deleted emails illegally and unethically? Yes. Like a girl? No. Then what? Like something out of the darkness. It doesn’t have a name but if you see it coming you better run.

Wouldn’t it be a lot easier to just say: no words that accurately describe Hillary Clinton are to be used.

That said, Hillary Clinton is at BEST, a polarizing, calculating, disingenuous, insincere, ambitious, inevitable, entitled, over-confident, secretive, will do anything to win, represents the past out of touch a-hole.

She also sold our her country (rather cheaply) and is responsible for the deaths of an American ambassador and several American soldiers.

Aside from all that, she’s just another a talentless crook.

: “polarizing,” “calculating,” “disingenuous,” “insincere,” “ambitious,” “inevitable,” “entitled,” “over-confident,” “secretive,” “will do anything to win,” “represents the past,” and “out of touch.”

And I thought those were words and phrases used by the vast right-wing conspiracy.

But it turns out they are merely sexist, and would only be applied to a woman.

In an inevitably polarizing move, Clinton supporters have ambitiously made the calculating move to ban the insincere use of a round dozen words and phrases. Are they over-confident, or just out of touch with the era of twitter and instagram, when ordinary people feel entitled to post their every thought and feeling? Such censorship represents the past, and seems like the disingenous move of a secretive campaign that will do anything to win.

But that’s just my opinion.

I noticed “incompetent” is not on the prohibited list.

I hate her politics and her blatant corruptions, but ohhhhhh gaaawddd that body. YUM.

Looking at those words the only thing left to describe her is liar, corrupt, evil, incompetent, no accomplishments, betraying our people in Benghazi.