Putin spokescomrade Dmitry Peskov has the worst job in the world this weekend.

Vladimir Putin hasn’t been seen in public since March 5, and the public is starting to ask questions. Some of Putin’s most vocal opponents are dropping off the map in the wake of opposition leader Boris Nemtsov’s murder; Putin’s absence has done nothing to quell the fears of critics. Others are speculating that Putin has fallen ill (or even died), claims that have been summarily rejected by Peskov and other Putin insiders:

“No need to worry, everything is all right. He has working meetings all the time, only not all of these meetings are public,” Dmitry Peskov said on Thursday in an interview with Echo of Moscow radio. He added that the president is “absolutely healthy” and that “his handshake is so strong he breaks hands with it.”

Shortly before the radio interview Peskov dismissed the rumors of Putin’s possible illness in an interview with TASS.

“As soon as the sun appears in spring, when the smell of spring is in the air, some people suffer from crises. … Some have hallucinations about the government dissolution and some cannot see Putin on television for several days,” he said. “We have a calm attitude to such crises and keep answering all questions in a patient manner.”

My favorite rumor so far comes from Swiss newspaper Blick. Blick contends that Putin snuck away to Switzerland to witness the birth of his love child with ex-gymnast Alina Kabaeva: 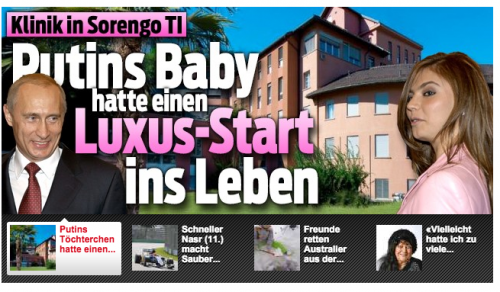 “Es ist ein Madchen!” or “It’s a Girl!” screamed a headline from the Swiss newspaper Blick, which had him in Lugano to witness the arrival of his child with Alina Kabaeva, 31, a retired Olympic gymnast who served in the Russian parliament and now works for a media company.

The paper reported that Putin’s daughter was born at the posh Santa Anna di Sorgeno clinic on the Italian border.

Putin reserved two rooms at the clinic — one for Kabaeva, and one for body guards, Swiss radio channel RSI said, according to the Daily Beast.

Putin himself was staying with friends in the area, the Swiss website Ticino news reported.

The Russian government made an attempt to dismantle the rumor mill by releasing a photo they claim was taken during a meeting early this month between Putin and the regional governor of Karelia, but the people aren’t buying it.

Just when we thought we had a monopoly on the Executive causing a complete media meltdown, Mr. Kremlin Intrigue rolls in and steals the show.

At any rate, the internet is having a ball with all this:

I don't buy this love child stuff. Smart money says Putin is out of town filming cameo for Sharknado 3. He plays the shark. AND the nado.

Putin is standing right behind you.

Putin's going to reappear with his head attached to a robot body. Watch.

Putin is on the plane, sitting on top of a box full of Lerner’s e-mails and drinking an Ecto Cooler.

For the moment, Putin is both dead and alive. #Schrodingersputin

Let’s take this to the comments—where do you think Putin is hiding?

The flu seems totally plausible — one of the drawbacks of a cult of personality is that the leader can’t be seen in public with a runny nose.

Putin is playing hooky stirring up the rumor mill to take heat off his buddy Gumby Obama.

Was it Obama that looked in Putin’s eyes? Nah! Do you bring anything to the table besides h8te? Boring!

Do you bring anything to the table besides h8te?

Hey Grandma, if we’re going to use neologisms to look all hip and jiggy wit it, let’s use them right please. You with me? Here goes:

“Eight” is pronounced “ate”, right? So when you use the number 8 to replace letters in a word, what letters does it replace…? There ya go! H8!

Get it now? Oh, no, don’t thank me! I’m a helping person! I love to help!
#LI #CaringForOurTrolls

No, it was Gumby who looked into then President Medvedev eyes and said he would be more flexible after the election.

Putin put on 10lbs over the Holidays; can’t bare to be seen in public until he gets rid of his decadent Western Belly.

Beria was seen running around the Kremlin while shouting: “Is there a doctor in the palace?”

Of course, he might have been saying: “Cleanup in aisle 15!”

Putin is standing right behind you.

Where’s Putin? Maybe he’s Putin on the Ritz outside the scrutiny of Russian eyes.

What I really want to know is…Where’s Waldo?

He’s not dead…his spokesgoon would have said he had a cold. Andropov, Chernenko…soviets die of colds.

Standing on a cracker.

Tune in, turn on, Andropov

All the gloom and doom. He’s probably recovering from cosmetic surgery. Gotta look good if you’re going to recreate the Empire

Don’t know where he is, only where I hope he is. Being eaten by worms…