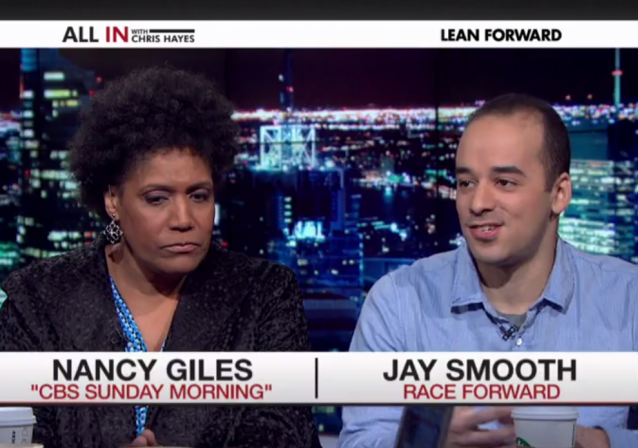 This might be the most deliciously awkward thing I’ve ever witnessed on cable news. Although Lawrence O’Donnell pretending to be a Boston southie and challenging Tag Romney to a fight is still at the top of that list.

Yesterday, MSNBC’s Chris Hayes discussed Starbucks’ disastrous social justice campaign — ‘Race Together.’ Meant to encourage baristas to engage customers in conversations about race, ‘Race Together’ received an overwhelming amount of criticism from both the left and right.

“I agree, the intentions seem noble and I want to keep an open mind,” said Smooth talking about ‘Race Together’, “but I think there’s this strange fixation on “conversation” when it comes to race that you don’t see with other issues that we want to take seriously. I think it’s telling that when Howard Schultz wanted to help veterans, he didn’t just tell people to have conversations about how much they like veterans, he committed to a plan of action to help veterans… He talked about being inspired by what happened in Ferguson and other places, but if you look at the DOJ report on Ferguson, it does not describe issues that can be addressed by increasing the number of chats in coffee shops. We’re talking about institutional, systemic issues.”

After watching the clip, Nancy Giles turns to Smooth, begins gyrating her shoulders and says, “I can’t help but tease Jay about the kinda like, brotha way he was trying to talk, like “hey” with the rap music in the background and like, down with people.”

“But it’s another interesting, funny thing about race,” Giles goes on, “like, there would be some people who feel that you co-opted something like that and other people might feel “well that’s his background and that’s really cool, too” these are conversations that are really interesting.”

“It’s also interesting because I’m actually black, but you assumed otherwise. And this is the sort of awkwardness you can look forward to at Starbucks.”

The video won’t load for me…. but if the text above is accurate he’s a kinder gentleman than I am… under those circumstances I think my reaction would have been less controlled than his.

I had the same problem and disabled my ad blocker. Seemed to load after that. Tried it again with ad blocker enabled and the video stalled again. (sorry prof)

Could we just get *someone* with a big megaphone to point out the bang-your-head-on-the-desk-until-you-pass-out stupidity of the fact that we are still buying into the one-drop-of-blood-corrupts-you racist definitions of black and white?

It’s become a default, unquestioned background assumption, and it’s based on logic we would immediately reject today.

In other words, it’s exactly the kind of thing that a “conversation” about race should help fix.

From wiki.
“Smooth, the son of a black father and a white mother, grew up in New York City.”

Has anyone asked “woman of color” Elizabeth Warren how she feels about this?

Not that I think it’d be useful in any way; I just want to see her run away again 🙂

1. for a time in the very late 60s, I lived in New Orleans, and have been back several times. One thing I learned which kind of amazed me was that, sitting in an up-scale Garden District restaurant, I’d overhear some of the leading black families (and there are a LOT) deprecating their darker-skinned neighbors. You can hear it today. “Racism” doesn’t know any race in particular.

2. why is “Mr. Smooth” “black”? As with a lot of people (Mariah Carey) she ELECTS to be “black” BECAUSE there is a positive ADVANTAGE in America today to associate with that identity. THAT is discrimination. It can’t come from anything else. We can discriminate FOR someone or group as readily as we discriminate AGAINST them. Ask an Asian kid trying to get into a top university.

3. Chris Hayes is a certified idiot. The DOJ Ferguson report is a dirty joke, not a great piece of work. Black people in America are killed at about twice the rate of other races in fatal car wrecks. The laws of physics are not proof of racism, disparate impact (ok, that got punny) notwithstanding.

Do you have a citation for the statement that black people are killed at a disproportionately high rate in car accidents? And does that include drivers and pedestrians? Thanks.

That’s a dated publication, and it contains a LOT of stats that are easily confusing if you don’t understand what they’re expressing.

You can tease out more current stuff.

You might also check out FBI crime stats, by the way. Blacks are disproportionately the victims AND the perpetrators of violent crime, based on reporting done AFTER the crimes. It’s just the fact.

You may wish to argue causation, which is not explained by the numbers, but the facts are not subject to debate.

And you can do your own research if you don’t believe me. I could not care less. And I’m nowhere near as nice and polite as Rags – ask anyone.

Go to page 40. According to the data, black Americans are much less prone to own cares. Note that ownership is about 1/4 (roughly) that of white Americans when incomes of both are over 200% of the poverty line.

Yet, black drivers do die at slightly higher rates than white drivers.

The point being that, if you own a car and are a black driver, you are twice as likely to be killed in an auto accident. Which, truth to tell, is more precise than what I stated earlier.

I think there’s an implication that Indians tend to own cars a lot, because they also have the highest rate of traffic deaths.

I think the number of cars you own would be irrelevant – you can only drive one at a time and you can only have a wreck in the one you’re driving at the time (that is to day, you can’t die in more than one of your own cars). So owning more than one shouldn’t, by itself, increase your chances of being killed while driving one of them. (Although if you own and drive more than one car, the probability of you dying in any one particular car you own and drive would go down!)

Not about the number of car per household.

Mr. Jay Smooth could pass for Cherokee. He looks more Native-American than Warren.

Behold! An “actual” black. Doesn’t need to worry about trigger-happy cops going on high alert, but still qualifies as part-time racial identity zealot. When I was a teen, I knew a guy who looked just like him. He would always deny any genetic trace when given the business about it by his peers.

Not that Nancy Giles is an ignorant, pompous jerk, but that anyone cares enough about Chris Hayes to watch or record his show.

Gender is purportedly a social construct. While race is intrinsic and inherited… for selective causes. It’s part of the pro-choice religion (i.e. moral philosophy) that warps reality to conform to individual prejudice and comfort.

That said, gender confusion and race discrimination would not be such a problem without people forcing their normalization. Notably through selective exclusion. For example, only trans orientations were normalized, while other orientations are still discriminated. We can probably blame the psychiatrists for this oversight. Another example is the assumption that African Americans are black, which excludes native white, brown, etc. Africans in America.

Gender is a social construct?

Your chromosomes beg to differ.

A backer of class warfare suffered a public setback. What a shame.

It’s a teachable moment. Don’t judge people by the color of their skin.

Diversity training failed her at a critical moment.

I just personally love how he basically said she is a racist by assuming – and judging him – based on the color of his skin, as though that was what defined him. And, that he had to somehow apologize for speaking a certain way, doing something she claimed as hers, or something.

But of course, no one ever called out Hillary when she crowed, “I aint in no ways tired……..!” …except Rush, of course.

I know it’s an odd argument but why is it when blacks speak perfect English it is okay but when a white speaks perfect ebonics it is a cop out or being uncool? I remember in the old movie “Airplane” there was a white guy who could speak jive to two blacks on the plane and it was hilarious. Now I am not sure the PC censors would allow such humor.

I remember that scene. It was hilarious, more so because it wasn’t a guy; it was a little old white lady. She spoke “Jive”.

Ah, the days when racial jokes were funny, and not a microaggressive insult….

And the actress in the Airplane Ebonics gag was Barbara Billingsley, aka June Cleaver, The Beav’s mom. The big black guy in the scene use the term (phonetically) “hodin draggin”… Does anyone know what that means? I ask because I heard Bill Cosby long ago (60s) use the same thing in a similar sketch about two black winos conversing in jive.

Here’s the scene you’re thinking of:

There was an old radio skit kind of like that, I think on Jack Benny, with Mel Blanc playing a jive-talking delivery driver. There was no racial connotation to it, specifically; I think he was just supposed to be some kind of jazzbo hepcat, but they did have to have some kid translate the jive to an older, squarer man (Benny, if I recall correctly). I’m not ancient, I just heard this on the radio a few weeks ago.