Virginia State Bar Council not consulted or asked to vote according to Council Member. 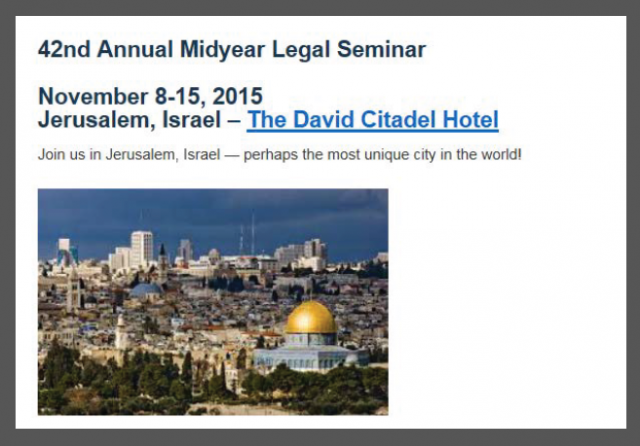 The Virginia State Bar’s cancellation of its mid-year legal seminar in Israel gets stranger and stranger.

For background, see my posts:

I have learned new information today. Key among the new information is that I obtained from a VSB Council Member a copy of the email which appears to have started the controversy.

The email was sent to all council members at approximately 9:14 a.m., on March 27, 2015, repeating the allegations contained in a Change.org Petition, and signed by 36 VSB members. Here is a partial image:

According to the Council member who provided me with the email, the Council was not consulted about the cancellation and was not asked to vote:

I received an email from a group of lawyers concerned about the trip Friday morning in an email sent to members of the Virginia State Bar Council (I am a member of the Council)….

The next I heard of the matter was in an email sent to members of the bar Sunday, which spoke of canceling the trip. That email referred to a previous email the bar sent on Friday that I had received but did not notice until the Sunday email brought it to my attention.

That is the extent of my knowledge of and involvement with the matter. The Council was not consulted nor did it vote on the matter.

This helps explain how VSB went from a March 25 email from its President encouraging members to sign up for the Israel trip, to a March 27 late day/evening email announcing the cancellation.

In an email to me tonight, the full version of which is an Update here, President-Elect Edward Weiner shed light on what happened (emphasis added):

…. You ask: Why not just cancel the trip for insufficient sign up? In retrospect it sure would’ve been a lot easier.

Allow me to put this in perspective. The Virginia State Bar has approximately 50,000 members. Each year, the Midyear CLE (Continuing Legal Education Seminar) generally draws 65 to 80 members – certainly one of our smaller programs.

Israel was selected as the location for 2015. The proposed trip was advertised for months. At the end of March, with an April 1 deadline to secure airline and hotel reservations, we were only at 1/3 of the 60 (I believe we had 17 people signed up) attorneys needed to make the trip “a go”. When we sent out the March 25 email message regarding our summer convention in June, President Martingayle included a reminder about the deadline for the Israel trip. Shortly after that, we received a petition that some of our members would feel unwelcomed in participating. At that moment, we had more members opposed to the trip than were signed up for it.

When it was decided to cancel the trip on March 27, we were wholly unaware of any efforts to boycott Israel. We now find ourselves in the midst of a political issue that we never saw coming and which played absolutely no part in our decision either to go to Israel in the first place or to cancel the trip. I assure you there was no intent to discredit Israel. The cancellation of the trip was not intended to opine on Israel’s security measures….

The VSB has not and will not in any way imply that Israel’s security concerns or entry procedures are improper. We fully recognize that every country has its own particular security concerns and entry procedures, as does the United States. However, we were made aware that we could not guarantee that all of the VSB members would be allowed into the country without prolonged scrutiny (proper or improper). We recognize that obtaining that assurance in advance from other potential VSB destinations also might be problematic.

We certainly did not intend to offend anyone by proposing this trip, or by canceling it….

Weiner’s email explanation, combined with the council member’s email quoted above, suggests that the process of evaluating whether to cancel was initiated at or about 9:15 a.m. on Friday, March 27. By that evening, a mass email had gone out to the membership cancelling the trip based on allegedly discriminatory Israeli border policies.

This also would mean that VSD did not consult with its Council even though the cancellation appears to contradict Virginia policy of encouraging economic interaction with Israel.

I posed questions about this in a follow up email Weiner tonight, but have not yet heard back :

Was the Friday, March 27 email to VSB Council members, sent at or about 9:14 a.m., and signed by 36 VSB members, the the first time the issue was raised?

Also, I’ve been told there was no council vote on cancelling? Is this correct?

Who made the decision to cancel?

(In fairness, Weiner generally has been very responsive to my questions, unlike President Kevin Martingayle who has not responded to any of my emails to him.)

What a strange event.

It would be quite astonishing if no one involved in the cancellation process at VSB was aware of the worldwide boycott movement against Israel, even though it has been in the news and the subject of discussion by John Kerry, Benjamin Netanyahu and others.

There is little doubt that VSB rushed to judgment. It’s becoming more clear just how rushed that judgment was.

What should VSB do now? The Jewish Community Federation of Richmond suggests:

We ask that the VSB acknowledge its mistake and take swift action.

First, the VSB should write its members and explicitly disavow that the VSB believes Israel’s entry procedures are illegitimate.

Second, it should emphasize that it has no reason to believe that any VSB member would be denied admission to Israel for any improper reason.

Third, it should purge its official rulings and policy positions of any
implication of impermissible Israeli entry policies.

It is true that these issues are contentious and volatile. That the VSB made
a mistake in this matter does not change the fact that its leaders are
committed and engaged. We hope that the VSB will remedy its mistake by
issuing the full and prompt disavowal we urge here.

UPDATE: A March 31, 2015 report in Virginia Lawyers Weekly confirms that the controversy did not start until Friday morning, March 27:

Bar leaders counted about 30 signatures of Virginia lawyers who objected to the Jerusalem program, more than those who actually wanted to take the trip, Weiner said.

Until the petition arrived, Weiner said he had not anticipated concerns about exclusion or heightened scrutiny of some bar members on the trip.

Once alerted to concerns about travel restrictions, Weiner said he envisioned a bus load of seminar participants idling at the airport while a handful of Virginia lawyers were questioned by Israeli authorities.

Martingayle and Weiner – together at The Greenbrier on Friday for a meeting of the Virginia Trial Lawyers Association – determined to call off the seminar, Weiner said.

in my humble opinion……

just as LifeLock and Starbucks have had to do…….

Do any of the VSB gang of 36 have connections to SOROS FUND CHARITABLE FOUNDATION Change.org, financial connections that would compell them to sign such a petition?

These 36 are state licensees addressing a state agency. It is not any part of any grievance or personnel process, so their names should be made public.

If they feel empowered enough to dictate state policy, we should know their names.

If you think the Virginia Bar has its leftist useful idiots, try reading the American Ber Association’s magazine.

I hope they hold their meeting in Sudan or Iran or Malaysia. Seriously, I hope they do.

The 36 BDS lawyers in the VSB should be named and shamed.