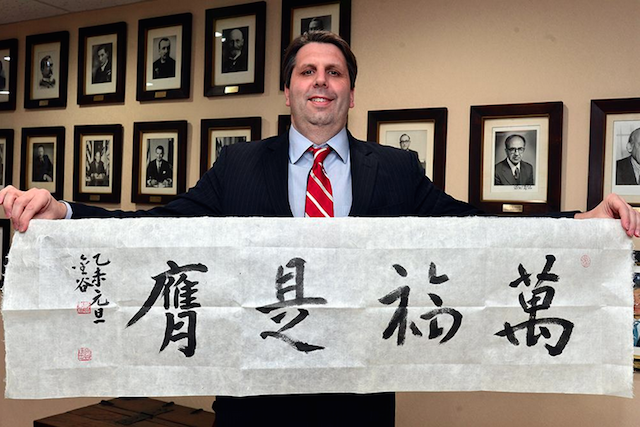 U.S. Ambassador Mark Lippert is recovering from injuries he sustained in a knife attack that occurred while he was at a breakfast meeting in Seoul.

55-year-old Kim Ki-jong was caught and arrested following the attack.

Reuters has the details:

Kim was dressed in traditional Korean clothing and shouted that North and South Korea should be reunited just before he attacked Lippert. He also shouted that he opposed “war exercises”, an apparent reference to annual joint U.S.-South Korean military exercises that began this week.

“The guy comes in wearing traditional Korean brown and tan dress. He yells something, goes up to the ambassador and slashes him in the face,” witness Michael Lammbrau of the Arirang Institute think tank told Reuters.

Kim is a member of the pro-Korean unification group that hosted the event, according to police. He also stages one-man protests against Japan over disputed islands known as Dokdo in Korean and Takeshima in Japanese.

“People wrestled the guy to the ground, the ambassador was still in his chair. The ambassador fought him from his seat … There was a trail of blood behind him. He had about a seven inch-long gash on the right side of his face,” Lammbrau said.

The State Department has labeled what happened a “senseless attack”:

Thoughts are w/@mwlippert & his family after today's senseless attack. Grateful to people of #Korea for their care for him & well wishes.

We’ll be keeping Ambassador Lippert in our prayers.

Yep, we sure get that.

Rumor has it that Brian Williams karate kicked the blade from the man’s hand and laid him on his back with his 5 finger death punch.

My apologies to LI for an insensitive previous post. The thing is: from Wiki “He is credited for helping Obama develop his views on defense and foreign policy”. Ambassador wants to be in bed with Obama, then you have to take the good with the bad. I didn’t let my kids play with everyone in the neighborhood for good reasons.

Senseless attack? Someone needs to read a little history of the region. Oh well, it wouldn’t change a thing anyway (given what we say about non-Islamic ISIS and non-Islamic terror committed by Islamic radicals.) The man knew exactly what he was doing, to whom, and why. It’s the act of a radical, not someone with mental difficulties.

It bears watching if he gets treated with kid gloves. Would not surprise me.

The story is not what happened, but WHY. Where was the security we presumably provide for ambassadors? Does that remain a problem even after Benghazi?

This ambassador refused even the security S. Korea wanted to provide so that he could walk from his residence to the embassy to be as open to the public as possible.

Apparently his assailant also attacked an ambassador in 2010, a Japanese ambassador (but of course), that time with stones. I don’t believe he drew blood in that case but apparently he was given a suspended sentence, wrote a book glorifying terrorism and well, here he is today.

Considering the history between Japan and Korea, I wouldn’t have been surprised if they gave him a medal.

Karma is a bitch, Lipert.