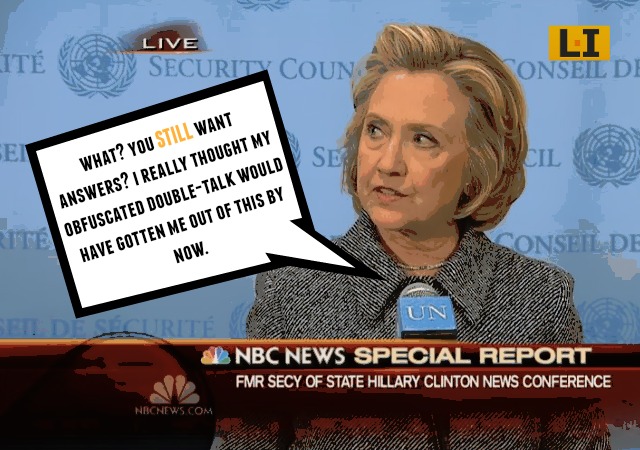 While writers like Ben White are encouraging Hillary to kickstart her 2016 bid immediately, the House Select Committee on Benghazi is still looking for answers.

Today, Gowdy sent a letter to Hillary Clinton’s counsel confirming the extension of subpoena deadline to March 27, and formally requesting the former Secretary of State surrender her email servers to a mutually agreed upon third party for forensic examination.

Gowdy explained Hillary’s unusual and likely unprecedented email arrangement, an arrangement that made her the sole arbiter of relevant documentation. Making note that Mrs. Clinton deleted emails, Gowdy wrote, “the deletion of emails is not normal practice once any investigation, let alone litigation, commences. The fact that she apparently deleted some emails after Congress initially requested documents raises serious concerns.”

The House of Representatives issued the following statement this afternoon:

Washington, DC– Select Committee on Benghazi Chairman Trey Gowdy today sent a letter requesting former Secretary of State Hillary Clinton turn over the server she used for official State Department business to the State Department inspector general or a neutral third party for independent analysis of what records should be in the public domain.

“Though Secretary Clinton alone is responsible for causing this issue, she alone does not get to determine its outcome,” said Gowdy, R-S.C. “That is why in the interest of transparency for the American people, I am formally requesting she turn the server over to the State Department’s inspector general or a mutually agreeable third party.

“An independent analysis of the private server Secretary Clinton used for the official conduct of U.S. government business is the best way to remove politics and personal consideration from the equation. Having a neutral, third-party arbiter such as the State Department IG do a forensic analysis and document review is an eminently fair and reasonable means to determine what should be made public.

“As I have said many times, we have no interest in Secretary Clinton’s personal emails, but the American people have a clear right to the public records from her time as secretary of State.”

The letter transmitted today to the former secretary’s personal attorney lays out the Select Committee’s exhaustive efforts to acquire her official communications regarding Libya as part of the committee’s inquiry into the 2012 Benghazi terrorist attacks.

The letter also notes the former secretary’s unprecedented email arrangement involving the use of private email and a server to maintain exclusive control over her official record while in office.

Gowdy has previously said he would support the server being turned over to a retired federal judge, an archivist or other inspector general to make public record determinations, and he reiterated his willingness to work to find a neutral arbiter that is agreeable to all concerned. He also stressed the importance of the committee getting a responsive and complete set of Libya-related documents from State Department to help expedite the committee’s inquiry.

That seems very reasonable. But – I doubt you get anywhere with Hillary Clinton by beind reasonable.

Hillary: You want the truth? You can’t handle the truth.

“You want the truth”? There ain’t nothing on that server but dust. She can hire the best IT guys in the world and you actually think she is going to leave anything on it?

Well with all the money in the world, she still left her server vulnerable to hackers, according to IT experts.

Gowdy sounds clueless – and it’s not just this.

That server most likely has had its files been so overwritten that they are not recpoverable from that server.

(But there may be back-up copies somewhere, at least for now..)

I think Hillary Clinton is following a legal strategy of trying to postpone acknowledging that as long as possible.

Partials will likely be recoverable for years though. Look for a Al Sharpton-style fire to destroy the drive(s).

The easy way to do that would be to print the emails she had sent to the State Department, wipe everything else that covers the time period she was SecState, and upgrade to a new server by backing up the remaining emails and restoring them to the new server. In one quick move, the new clean server (with all the security patches) can be presented as the target while the old server gets formatted down to the bare metal.

“Update: Clinton’s e-mail is on a hosted Exchange 2010 server, not in Chappaqua”

That’s the clintonemail.com server, and she’s probably not using that anyway, except maybe to avoid losing some e-mail from people who know only an e-mail address there.

One thing Gowdy can at least try to get answers to (they may try to claim Executive Privilege but this ios something that should not hold up) is the full text of all communications on the email issue between the State Departement and NBHillary Clinton or her lawyers.

They should also find out everything taht Hillary Clinton says was done in scritinizinmg and selecting the e-mails.

They should also ask for attorney client privelege to be waived on this matter, and the attoprneys should be asked any questions they can think of about these emails. At least confidentially.

As she claims she deleted ALL of her personal emails from the server, then she should have no problem turning it over!!!!

Who cares what the emails said?
The point is that she used an unauthorized server to conduct government business.
This eliminated any chance of transparency, which is the whole point about using only an authorized government server.
Law broken. Done.
Start the court proceedings against her.

The server is not enough.
She needs to turn any and all backups.

‘Cause she made backups, didn’t she? No?

Why doesn’t someone simply ask the NSA for Hillary’s correspondence?

I’ll flat guarantee you WH staff is doing that right now, eradicating anything that threatens Obama.

Finding out the answer to that question will be like the proverbial pulling teeth.

That was supposed to be a response to the question about whether Hillary Clinton made back-ups of her e-mail.

There are freeware toys out there that will do a complete (you choose 1 – 7 passes) ‘clean wipe’ of any disk, part or all of it. You don’t have to install them – run them from a USB stick. Load it to memory (no install needed), start it, and leave with the stick while it runs.

The NSA couldn’t get the data back. It’s called a ‘DOD wipe’ for that reason.

Is she smart enough (or hires someone who is) ? We’re not talking ‘computer guru’ type stuff here. Any kid in high school ‘computers 101’ class can do it. The programs are free.

Fancier version, but still bone simple – boot from an OS on the USB stick, and do it just the same way. This makes the C: HD a ‘non boot disk’ for that purpose, and you can wipe the OS too, with all it’s logs, etc. There will be no trace left behind.

I hope this finds it way to court. There are some needed precedents here, especially if Congress does elect to implore the NSA or some other entity with archiving capability to get in on the act. I suspect that if the NSA says it doesn’t have the stuff or can’t get it, the govt will have a hard time magically producing electronic communications in the future without showing dishonesty in past cases. Plus the courts need to weigh in on proper adherence to FOIA, Record Keeping Act, and other items. It will be especially important to see if the courts construe the server issue and related behavior to be akin to deliberate avoidance or violating presumptions of regularity, etc.

I’m sure she’s only trying to protect her private server, an illegal immigrant named “Juan”.

She’s surrendered her dignity. So why not her email server.