The Texas federal court that issued a temporary injunction halting Obama’s immigration executive action has just ordered the U.S. government to respond to allegations by the plaintiff States that the U.S. misrepresented to the Court the status of granting deportation waivers, and may thereby be in violation of the court’s temporary injunction.

As explained by John Hinderaker at Power Line, the issue revolves around representations the government made to the Judge, representations called into question by an unexpected “advisory” filed by the U.S. government:

Since Judge Hanen’s order was issued, it has come to light that by the date of the order, the Obama administration had already granted expanded DACA benefits (three years rather than two years) to approximately 100,000 illegal aliens. The Department of Justice disclosed this fact to Judge Hanen in a surprise filing:

The government’s lawyers essentially admitted that they were disclosing this fact because it was contrary to what they had previously told the court. That has led to a motion by the State of Texas to be allowed to conduct discovery to find out what happened. Here is Texas’s brief in support of that motion.

The Court just ruled this afternoon (Order at bottom of post) that it would not consider the U.S. motion to stay the temporary injunction until a hearing on the possible violations and misrepresentations on March 19.

Unless vacated on an emergency basis by the 5th Circuit, that means the immigration executive action remains on hold for at least another 10 days.

It also means that the extensions to 100,000 illegal aliens, while prior to the injunction, may be in violation of the injunction because the deferral continues.  That is why the U.S. filed the advisory in the first place, to get ahead of the issue and appear to volunteer the information before it was discovered. 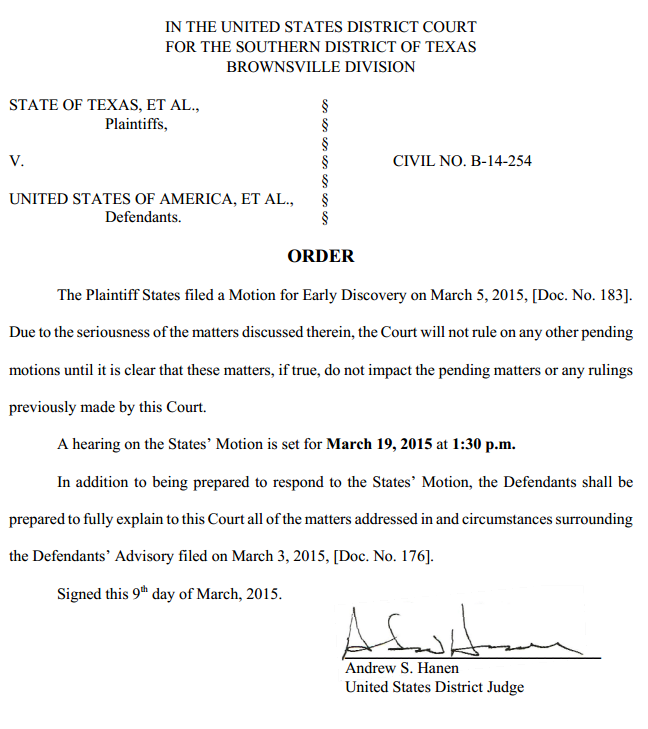 I would not be at all surprised if at the end of that hearing, at least one Government lawyer is removed in handcuffs for contempt. Now, since we’re in Texas, he/she would be entitled to a “Personal Recognizance” bond to get out of Jail pending a hearing on the contempt, but that will still be damaging. My guess is that if they’re licensed in Texas, they’ll be eating a Bar Sanction as well for violating the Texas Creed.

The day after filing the motion, Jan. 15, Justice Department lawyer Kathleen Hartnett appeared in Hanen’s court to emphasize that there was no problem delaying things for a while because the administration wasn’t implementing the president’s changes.

“In that [motion] we reiterated that no applications for the revised DACA — this is not even DAPA — revised DACA would be accepted until the 18th of February,” Hartnett told the judge, “and that no action would be taken on any of those applications until March the 4th.”

A moment later, just to be sure, Hanen said to Hartnett, “But as far as you know, nothing is going to happen in the next three weeks?”

“No, your honor,” Hartnett said.

“In terms of accepting applications or granting any up-or-down applications,” Hartnett said.

“For revised DACA, just to be totally clear,” Hartnett said.

Hartnett did not mention the 100,000 illegal immigrants to whom the administration had already rushed to grant longer protections and work permits under the president’s order.

The DOJ attorneys EXPLICITLY LIED to a Federal Judge hearing the case in order to get an “extension” to file a brief, and have now been CAUGHT in that lie.

Judge Hanen needs to bring the hammer down.

Indeed. I would be feeling “the earth move under my feet…” were I part of the Federal team.

Yes, On the courthouse steps at noon on the day after the finding of contempt with no opportunity for appeal or reprieve.

Surviving family members are expected to removed the body, clean-up the mess, and pay for the bullet.

Strangely enough, that depends entirely on how you define the “Death Penalty.”

In terms of the case, the Judge has the authority to find that the party that lied to the court has so egregiously violated the Court’s trust and the rules of Civil Procedure that the Court should immediately find for the other party as a sanction. Thus, the Judge “kills” the case by making the other party win.

The wiggle room phrase that stuck out for me was, ““But as far as you know…”

The Fed lawyer will simply say she didn’t know…end of her story.

We’ll have to see if that will be the end of the judge’s story.

Since the administration has already floated the (totally specious) argument that this federal court’s rulings only apply in the district in which the court is sitting, then surely the government will only be in trouble for the illegal aliens who were given their illegal amnesty in Judge Hanen’s district, right?

And following the administration’s reasoning, in future the rest of us will not be legally bound by any court or other ruling issued by any governmental authority outside our home district. Right, Eric?

We’re already in a constitutional crisis. It doesn’t appear that way because the second party to the crisis (the Republican party) is completely derelict and simply won’t declare it. Lawlessness is now the order of the day, and will continue to be so, as there is zero indication the GOP can or will do anything beyond limited expostulations of well-mannered outrage on the occasional Fox interview. Why would Obama stop doing anything he’s doing? Really, why? Because some backwater judge in Texas issued a ruling?

Are you suggesting that a Federal court has never stopped anything that Obama has tried?

Because that’s nonsense. There is still a rule of law here, strained though it may be.

Attorneys who appear in front of a judge are officers of the court and must be truthful to a fellow officer of the court (judge). They do not have to be under oath – they are required to answer the judge’s questions truthfully and to disclose all relevant facts that may be unknown to the court.

Any attorney employed by the DoJ is duty bound to know everything relevant to the case in which he/she appears. Thus, the attorney represents the entire DoJ and also the client (US). It’s up to the attorney and the DoJ to find out what they need to know, in this case whether any actions which would be affected by the injunction had actually happened.

Somebody is in serious trouble because the state bar that licensed an attorney held ib contempt also could snatch his/her license.

Thank you for you comments. I’m a lawyer and have litigated what “officer of the court” is – which has been distorted by our courts for their own purposes of asserting more power over lawyers. Historically, the term comes from England, where the designation of “officer of the court” was bestowed because special privileges were given, such as exemption from military service. In America, lawyers were never accorded those special privileges.

What I’m really asking is, since I haven’t practiced in federal court, is the judge really likely to use this tool? How often, in practice, are federal judges holding attorneys in contempt?

This is becoming Hanen vs United States of America, Obama, Holder, et al. Claims that the American spirit has been aborted have been greatly exaggerated.

I disagree. Judge Hanen is merely applying our law, he isn’t making it up as he goes along.

It is the citizenry of America against a wannabe pre-Magna Carta king – who likes cheap labor and cheap votes.

While hypotheticals are usually not indulged in, contingency planning has to be. I think it can be safely assumed that the Federal government has been and is in violation of the injunction, if only based on an extrapolation of past conduct.

So what happens if such is proved . . . . or openly admitted?

The only recourse by the courts is to . . . . slap another court order on the Federal government. What affect other than one similar to a flatus in a Fujita F-5 would that have?

We have a one-Party State, with no organized force defending the Constitution and the separation of powers. I really would like to hear from someone learned in the law what is left before the “last box”. Because it sure seems that is the only remaining course of action other than submission to tyranny.

obama probably hasn’t read the newspapers yet. Give it time, once he reads about it you just know he’ll jump all over gov to answer truthfully.
https://www.youtube.com/watch?v=WANNqr-vcx0

Can’t the court order that these illegal waivers, social security numbers and work permits be invalidated ?

Yes. The question is whether that would actually happen. It would depend on the proof and on the specific legal claim made by the plaintiffs, plus whether the judge woke up on a certain side of the bed (I don’t know which one works favorably). .

Hannen started out with a temporary Injunction on procedural grounds. Never even got into the fray.

Now they are in a lot more trouble, and digging like crazy.

When they face him this time, will they put down the shovel?

Oh, this is going to be really fun.