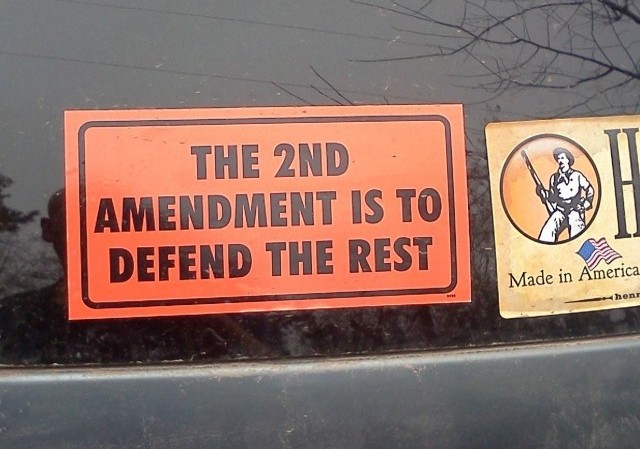 One common ruse in many states is to illegally post signs prohibiting the lawful carry of concealed firearms into a particular location.

Texas, for example, allows for the lawful posting of constraints on concealed carry rights through the use of what are referred to as “30.06 signs,” but the lawful use of these signs is highly limited. 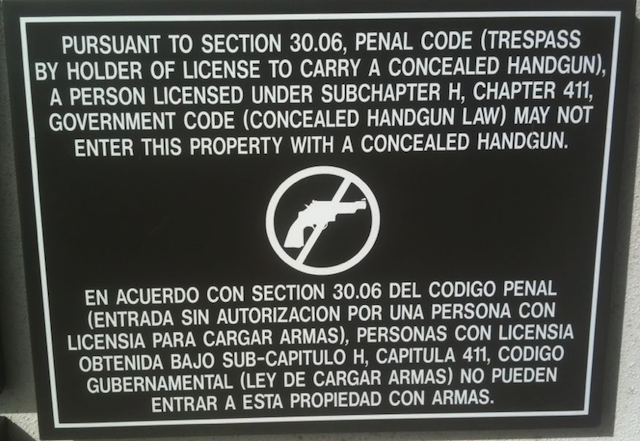 Sadly, it has become all too common for 30.06 signs to be posted where it is unlawful to do so. Someone who lawfully carries in violation of such an unlawful posting commits no criminal offense, but the posting naturally has a chilling effect on the lawful exercise of 2nd Amendment rights.  Some of the worst of these unlawful posters have been government entities.

Unfortunately, to date there has been no effective means of punishing those who unlawfully post such civil rights restrictions.  Government entities have been particularly out of reach, given their presumed sovereign immunity from legal action.

It is pleasing, therefore, to see Texas move towards ending such unlawful signage, as reported at the Guns.com blog, and in a manner that gives 2nd Amendment rights real teeth and punishes violators–even governmental violators–in their wallets.

The bill in question, SB273 (embedded at the bottom of this post), was filed in January and passed the state Senate by a large majority (26-5) in mid-March.  In the words of the legislation’s author:

And what about the statute’s teeth?  Violators would face a minimum fine of $1,000 for the first incident, and as much as $10,500 for any subsequent violations.

And what about government violations?

The measure, filed in January, would not only prohibit many state and local public buildings from barring lawful concealed carry, it would strip sovereign immunity from governmental bodies and officials who pursued such policies and allow them to be sued by gun owners for damages.

Unfortunately, some locations–such as schools and polling places–would remain deemed appropriate for lawful 30.06 posting, to what purpose is hard to imagine.  Private property can, of course, be so posted, though I would think this would happen only rarely–why advertise that there are only unlawfully possessed guns on your premises? Or, as one wit put it: 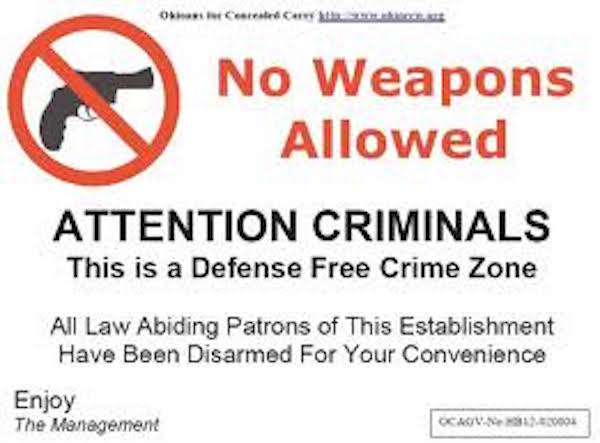 Of course SB 273 is not law quite yet.  It heads now to the state House, and if it passes there on to the almost certain signature of Governor Abbott.

When the government willing violates your rights, there ought to be harsh punishment for the person or persons who actually committed the violation.

Heh. 30-06 is a number that refers to an ammunition size, or a gun that takes that kind of ammunition. I wonder who numbered the legislation?

It’s called a 30.06 sign because it is defined in penal code section 30.06. That section was numbered 30.06 because it follow section 30.05. The ammo reference was a coincidence.

unless you were right there in the Tx legislature when it was written, I would guess that it was INTENTIONALLY placed at 30.06. Afterall, who says what ever is written in 30.05 belongs there and not at 30.06?

Because 30.05 (which has been there forever) deals with trespass, which CHL holders are not subject to (provided the trespass is due to the presence of a firearm). 30.06 deals with trespass by a license holder, and that was the logical place to put it in the Penal Code — right after 30.05.

Owners of private property have the right to prohibit concealed – or open for that matter – carry on their property. That’s one of the powers contained in ownership of the property. The Second Amendment and the similar provisions of the Texas Constitution apply to the government, not to private citizens. I agree that it is imprudent in many if not all cases to prohibit carrying a weapon, but it is the property owner’s right to do so. More attention ought to be paid to police and bureaucrats who violate our rights regularly and less worrying about other private citizens exercising their rights.

I think you forgot a word.

That would be Emily Litella.

When I was growing up, you’d never see a sign translation in Spanish.

I’ve never seen a 30.06 suitable for CCW. Nor would I want to fire a handgun in that caliber.

They’re probably too big for CCW, more like open carry. Probably hard to sit with one on too.

And speaking of fireballs, Heizer is making a .223 Derringer. But it only has one shot.

(sorry, down voted you by mistake)

I’ve seen and handled an earlier .45-70 revolver. It was one big piece of iron, built on the SAA pattern. It weighed about 6.5 lbs. If you were man enough to hold it out at arms length, you were man enough to fire it. I never had the chance, but the recoil was said to be not that bad; an extended heavy, rolling push. I bet it did light up the night.

I need one of these, I mean those random dinosaur attacks are increasing, LMAO.

Let’s hope some cheap-ass company like Hi Point or Heizer doesn’t make a pistol that takes 30.06. The ATF will try to ban that ammunition next! (Then when there is an overpopulation of deer we’ll have to resort to spending $5,000 a piece to sterilize the does…)

For more information of Texas local government abuse of 30.06 signs, see this:
https://klbennight.wordpress.com/2014/06/25/what-trumps-being-king/

Saguaro National Park near here still has “No Firearms” posted on signs near many trail heads even though they have added an update to their website that mentions the small detail that Congress has made possession of a weapon in the park by a permit holder legal. However they still have a no gun sign at the visitor center.

Wonderful…. remove the gun and put it under the front seat of your car? Yeah…. that adds to the general safety of everyone.

The Chief of Police in the town I visit for shopping and services screamed that familiar refrain about blood running in the streets when they had to remove the prohibition signs from the city parks.

By the way, a friend told me about a special gun safe he and his wife use when they must leave their handguns in the car. Of course they don’t like having to use it, and he doesn’t consider it secure enough for extended periods.

However, I believe that a property owner, by prohibiting effective self defense, should assume strict and unlimited liability for any assaults that occur on his property, including third party damages. (I saw it and was frightened and traumatized.) He has assumed an absolute responsibility to protect you. This strict and unlimited liability should be enshrined in law.

It will sort itself out.

This is exactly the kind of pro-active legislation that is needed to stop the gun-grabbers in their tracks.
Too often the champions of liberty and freedom are caught off guard by tyrannous attacks, and then they are playing catch-up.
This kind of legislative initiative is needed at a NATIONAL level.

“Ike | March 25, 2015 at 4:45 pm
Owners of private property have the right to prohibit concealed – or open for that matter – carry on their property. That’s one of the powers contained in ownership of the property.”

Not so fast. The States have broad police powers over private proprietarers who hold themselves open and invite the public in to their propert to do business. The state of Texas doesn’t need the bullshit legal fantasy of instersate commercial regulation – they have actual honest to god police power authority to regulate these relationships once the door is swung open and the sign is put on the door that says come in. We can say you must give an easement, you must have proper lighting, you must get an inspection every three years, you must follow the ADA, you must allow water we say you must allow because you are doing business in Texas. You allow the public in, you gave up your rights to set the terms. The end. That is the legal fact Jack. Ask any lawyer.