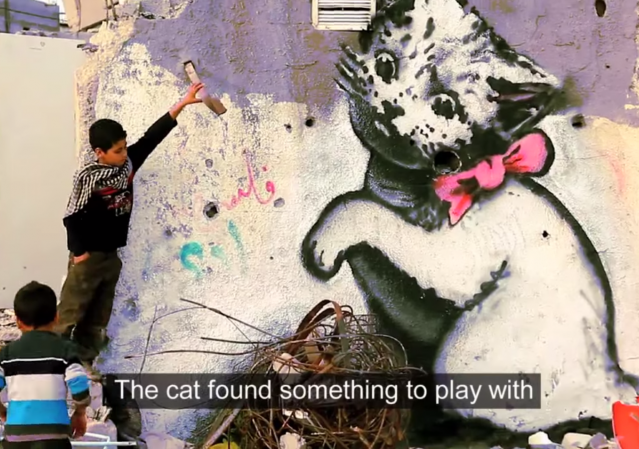 According to Mashable, this was not his first trip:

The Palestinian territory is not a new base for the British graffiti artist; in 2005 he made headlines for his art on Israel’s West Bank barrier. There were nine images in total, including one work with a girl attempting to float over the wall holding balloons, one of children playing on the sand with a hole above them showing a beach in the wall, and another of a dove with an olive branch and a bullseye on its chest.

Far from politically conservative, much of Banksy’s art rails against corporations and the wealthy, is anti-war, and pretty much diametrically opposed to any political view I have. His Occupy-like sympathies aside, Banksy is incredibly talented.

If only he used his talents for good, rather than wasting them on anti-Israel propaganda…

In his latest endeavor, Banksy headed to Gaza. Focusing solely on the destruction in the Gaza strip, he failed to provide any type of context as to how or why the destruction came to be — a common affliction among the anti-Israel crowd.

He released this mini documentary on his official website:

The ultimate irony? Banksy portrays the few Palestinian residents filmed as victims, left helpless and homeless by their “friendly neighbors,” while exploiting these same individuals to promote his work. While I admire and appreciate some of his art, it saddens me to see a gift like Banksy’s used to propagate hate and misinformation.

The video fails to mention, among other things, where the money to build the tunnel at the beginning came from or the where the rockets sent into Israel were launched from.

I know, details, details. Why let details get in the way of a piece of biased and smelly pile of propaganda.

I understand that the Israelis are withholding…in addition to cement…rocket fuel shipments into Gaza.