You’ll need to use Jazz Hands 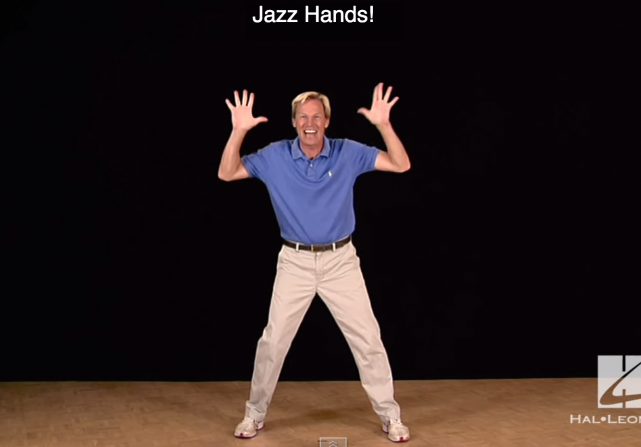 Today will go down in history as the day feminists officially stepped beyond the bounds of self-parody.

UK based outfit, the National Union of Students is hosting a conference for women. The multi-day conference for union delegates began today. Motions up for consideration at the conference include designating the abolishment of prisons as a feminist issue, free education and living grants, supporting the decriminalization of sex work, ending Transphobia, Biphobia, and Islamophobia on campus, and supporting the right to justice and education for Palestine.

This afternoon (our time, anyway), a group in attendance made the following request:

@nuswomcam please can we ask people to stop clapping but do feminist jazz hands? it's triggering some peoples' anxiety. thank you!

To which the NUS Women’s Campaign responded, saying:

@womcam yes, no worries. Hope everyone is okay x

A formal request was then issued to conference attendees:

Some delegates are requesting that we move to jazz hands rather than clapping, as it's triggering anxiety. Please be mindful! #nuswomen15

Yes, anxiety is a real issue. Yes, many people suffer from anxiety. But if conference applause is a ‘trigger,’ there are plenty of great therapists available to assist.

Beyond the jazz hand hilarity, NUS has some… not so inclusive views. Like the fact that they’re not so fond of white gay men: 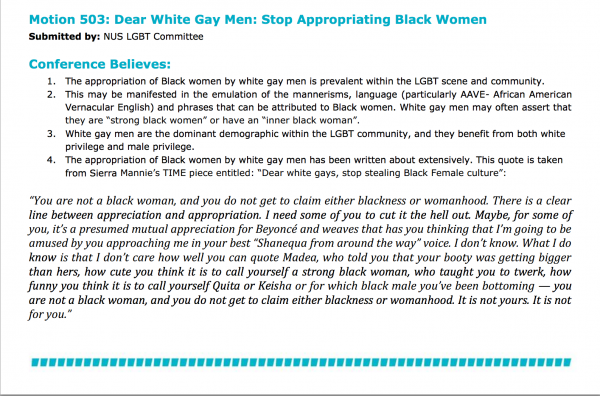 But this is what happens when you get an abundance of special snowflakes in a room together to talk about inclusion, diversity, and equality — without fail, they walk themselves past hypocrisy and into the land of self-parody. Sad indeed.

Conveniently, the home page feed directly above this story shows Fauxcahontas showing us her jazz hands; however, her version is the fierce, feminist, in-your-face version. Of course, there is also the Hillary what-difference-at-this-point-does-it-make version. What a delightfully versatile gesture. I know a gesture that is far more economical, utilizing a single digit….

I’d rather clap than get it.

This is beyond parody, which makes it hysterically, laugh out loud funny!

“I am woman, hear me whimper…”

Maybe we can have one of these delicate flowers re-mix the old “battle cry”…???

It’s true … feminism is a mental disease. I think we should open up the institutions and start filling them up again. *sigh* Save America, Lock Up A Feminist!

I’m not okay with this.

Is there a piece of land somewhere that we can give THEM?

They would demand that we open our borders (controlled borders are not “inclusive”) and come pouring back in to take advantage of all the freebies we give out to illegal aliens.

Jazz hands are racist.
Or something.

White people doing “jazz” anything is an appropriation of black culture.

You just can’t make stuff up as laughingly ridiculous as the real thing when you get a bunch of progtards together.

If they get rid of prisons, where are they going to put the rapists?

I’m pretty sure they plan on getting rid of all the men so it shouldn’t be an issue… until 5 minutes past when the last man is gone and they start attacking each other.

You misunderstand. They want to get rid of prisons which house women. It’s perfectly ok to put men in prison. That’s why it’s a feminist issue.

On the latter, for instance, it’s no longer legal for me to Scream when someone uses the terms: Ish-Shoes and Closure..?

See, this T-Rex Alpha Dawg can be whatcha’call Helpful and Supportive and OWN My Feeeeelings,’Yo.

Didn’t Al Jolson do Jazz hands? I guess these Sally Klohns will have to use “twinkles up” and “twinkles down”.

Anxiety: I say, we have nothing to phobia but phobia itself. Is there a doctor, a Henry Hawkins, in the house?

It sure looks like the gay white men are hogging all the white privilege AND all the Madea privilege. What’s a girl to do?

Jazz hands, please, no, the sound it makes is deafening!

Actually, the words coming from those feminists mouths is revolting, they are too dumb to exist, too stupid to punish, too idiotic to be concerned about their feelings!

Ignore them we much! 😉

Yes, but what is the sound of one jazz hand jazzing?

Jazz hands? How ironic! From http://www.etymonline.com/index.php?term=jazz:

Or this, which takes longer to state the same.
http://dictionaryblog.cambridge.org/2011/06/27/jazz-is-a-four-letter-word/

So, when I read the words “It is not yours. It is not for you.”, I immediately thought of Seinfeld’s Soup Nazi proclaiming “No soup for you!”:
https://www.youtube.com/watch?v=svSGKJFSl-8

Apparently Ru Paul (black) has the last laugh on this. On his very successful (and hilariously funny) Ru Paul’s Drag Race reality show contest (in its 7th season and slated for an 8th), he has had white, black, Asian, Native American and mixed-race contestants — some thin, some fat, some short, some tall — but all of them fabulous drag queens with amazing make-up, costumes, and catwalk attitude. Yes, they do the “Oooooh, girlfriend, no-she-better-don’t” schtick and “reading” other drag queens (fast-paced, clever, and catty insults) is a staple.

I think someone should take a poll of the NSU “feminists” with a simple question: When was the last time you had sex . . . with someone else?

As Ru Paul says to the weekly loser in the contest as they move to the finals: “I’m sorry my dear, but your time with us is over. It’s time to sashay . . . away.”

Jazz hands is triggering my anxieties!

What makes jazz hands done by a feminist different from regular jazz hands?

Theey are not done in Blackface.

What ever happened to “I am strong. I am invincible. I am Woman. Hear me roar?” These bimbos need to retire to their fainting couches. They are making the moslems case for them. Women are too flighty and irresponsible to be let out alone. They must be kept in purdah, and only go out in a burkah under the supervision of a competent male.

I suggest that clapping creates anxiety because of the different levels of clapping. Some people get very rousing applause when speaking, while others only get tepid, polite applause. This upsets them.

But I am not going to mock them. In Texas a decade back they passed a law that the Secretary of State would not publish the vote counts for uncontested elections. It seems that those folks running uncontested were only getting about 1/2 to 2/3 of the votes of corresponding contested elections and their little feelings got hurt.

If you’re going to mock these little snowflakes, then mock the majority voters in the State of Texas for the same thing.

Wow, you really contorted yourself to get a dig on Texas in there, didn’t ya little skippy? Tell you what, the Ft. Worth Rodeo is going on right now. Why dontcha go on down to the Stock Yard and go unload all your anti-Texas venom down there. You’ll have a blast.

Idiotic laws only require a small, highly vocal group to get behind. Or just one person who is strident enough.

Okay, about the “gay” men appropriating “black” women. It would not surprise me at all – though I doubt it’s as common as the homosexual men claim it – that a number of them have alternate personalities, one of which is a black female.

I have friends/acquaintances who were horribly abused- one was tortured – as a child, and they have many alternate personalities. Frequently, at least one will be female, or want to be female. This used to be called “multiple personality disorder;” now it’s called “dissociative identity disorder.” I liked MPD better, because when you meet one of these folks, multiple personalities is how it plays out in your interaction with them. It’s a very sad phenonmenon.

So the black women complaining are not as knowledgeable about homosexual men as they claim to be.

This “jazz hands” stuff is obviously discreminatory against the blind.

Sorry feminists, I don’t do ‘jazz hands’, but please accept this jazz finger.

Someone needs to bring Motion 503 to the attention of the Yankee Marshal over on YouTube.