Starbucks’ ‘Race Together’ cancelled — for now

Starbucks’ ‘Race Together’ cancelled — for now 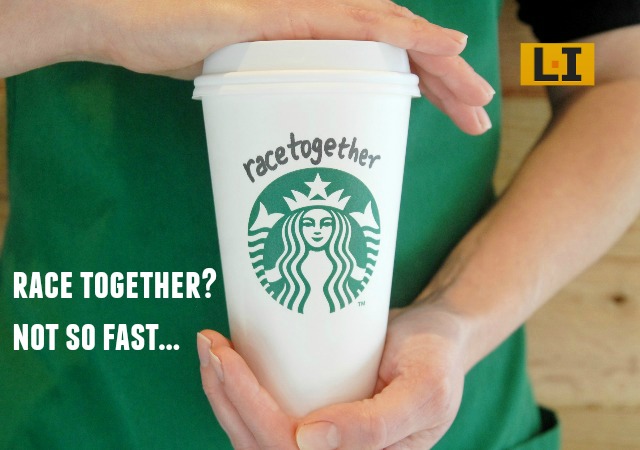 If there were an award for ill-conceived marketing campaigns, ‘Race Together‘ would earn the gold. Starbucks’ latest social justice endeavor that encouraged baristas to engage customers in conversations about race came to a resounding halt Sunday.

One week after its launch, the corporate coffee behemoth decided to cancel the first phase of ‘Race Together’ after receiving tremendous negative backlash.

Amazingly, consumers don’t enjoy being told they’re racist while ordering a cup of coffee. Who knew?

According to the Associated Press, ‘Race Together’ is not ending, it’s merely moving into the next marketing phase.

The campaign has been criticized as opportunistic and inappropriate, coming in the wake of racially charged events such as national protests over police killings of black males. Others questioned whether Starbucks workers could spark productive conversations about race while serving drinks.

The phase-out is not a reaction to that pushback, Olson said. “Nothing is changing. It’s all part of the cadence of the timeline we originally planned.”

He echoed the company memo, saying of the Race Together initiative, “We’re leaning into it hard.”

While customers won’t be badgered by baristas, Starbucks plans to move forward with ads in USA TODAY, in-store placards, and also plans to open more stores in minority communities, reports the AP.

Doubling down on a universally despised marketing campaign? Ok, then.

Business Insider posits that logistics killed ‘Race Together’, and not its tone-deaf message. Speaking as a former Starbucks barista (I worked for the coffee company while in college), I doubt that’s the case. Higher volume stores tend to deal with promotions differently than lower volume stores, but that simple fact was never cause for cancellation.

For the customers who fancy themselves enlightened, Starbucks passed about these nifty little racial quota tests.

Ricochet’s Jon Gabriel expands on the problem with the worksheet, beyond the obvious of course. The supposition that their customer base parses social gatherings, social media feeds, and every other human encounter based on race is not only problematic (and one might argue inherently racist), but outright insulting to those who deal with people as people and not as racial objects meant for quota-filling.

So it’s not for logistical purposes or any ‘next phase of marketing’ that Race Together ceases to be. The public repudiation of coffee con race resulted in the flop of what is arguably the worst, most insulting marketing campaign in recent memory.

Amazingly, consumers don’t enjoy being told they’re racist while ordering a cup of coffee. Who knew?

Starbucks: “Crap in, crap out.”

They’re as bad off as “LifeLock.”

The government, offices of diversity, and civil rights industry were not amused.

“Nothing is changing. It’s all part of the cadence of the timeline we originally planned.”

OH, yah. You “planned” on having your glang slammed in the door! Beau-te-ful…

“We’re leaning into it hard.”

IF that’s true, you really need to call your physician. That isn’t “natural”.

LOL – let’s see how many bruthas in Detroit are willing to shell out $5 for a cup of Joe.

I can already hear the rioters in Ferguson making plans to burn down the nearest Starbucks.

Race
to
get
her!

Those crafty devils at Starbucks corporate thought we wouldn’t notice.

I’d give my left font to see their sales figures from last week.

If they suffer a loss, obola will give them a taxpayer-funded bailout.

Not A Member of Any Organized Political in reply to JackRussellTerrierist. | March 24, 2015 at 2:21 pm

Sigh. There is no such thing as “a different race” – we’re all human.

Change the question to “a slightly different skin color”, and then we’re back to the brown paper bag test.

I summarize the race problem in America as follows:

1- There’s no race problem in America. Racists are few and most of them are the ones crying racism.

2- There’s an industry (see #1) that makes money trying to convince me that I am a racist even if I don’t know it, while I think to myself, “WTF!!!”

My single response: “My daughter is bi-racial, are you?”

That should shut them up fairly quick.

Eventually, you start driving home that the only race is the human race.

Other better questions for their test:

“When Obama hangs out with a white person, is he hanging out with a person of a different race?”

“When Obama hangs out with a black person, is he hanging out with a person of a different race?”

“When Obama hangs out with his children, is he hanging out with a person of a different race?”

Are we sure that “Race together” doesn’t refer to the MotoGP in Austin?

At my favorite Dunkin Donuts in Volusia County, #RaceTogether refers to the Daytona 500.

Whoever came up with this really needs to have a reality check. If you want black coffee, you probably wouldn’t eveb go to Starbucks.

Is this really a campaign to decrease the resistance of poor people to paying $5 for a cup of coffee?

S$ is going to HOPE for some spare CHANGE.

Start the starbucks dialogue with this gem about a black slave owner winning his case to get his indentured servant back for life. Anthony Johnson’s relatives need to pay reparations and he wasn’t the only black slave owner.

When Anthony Johnson was released from servitude, he was legally recognized as a “free Negro.” He developed a successful farm. In 1651 he owned 250 acres, and the services of four white and one black indentured servants. In 1653, John Casor, a black indentured servant whose contract Johnson appeared to have bought in the early 1640s, approached Captain Goldsmith, claiming his indenture had expired seven years earlier and that he was being held illegally by Johnson. A neighbor, Robert Parker, intervened and persuaded Johnson to free Casor.
Parker offered Casor work, and he signed a term of indenture to the planter. Johnson sued Parker in the Northampton Court in 1654 for the return of Casor.
————–
The court initially found in favor of Parker, but Johnson appealed. In 1655, the court reversed its ruling.[9] Finding that Anthony Johnson still “owned” John Casor, the court ordered that he be returned with the court dues paid by Robert Parker.[10]

Next up, Taco Bell asks its customers to talk about immigration.

I’m look forward to my favorite chik-in sammich place commissioning all of its counter staff to engage people in the virtues of two parent heterosexual families.

The lines are long enough already!