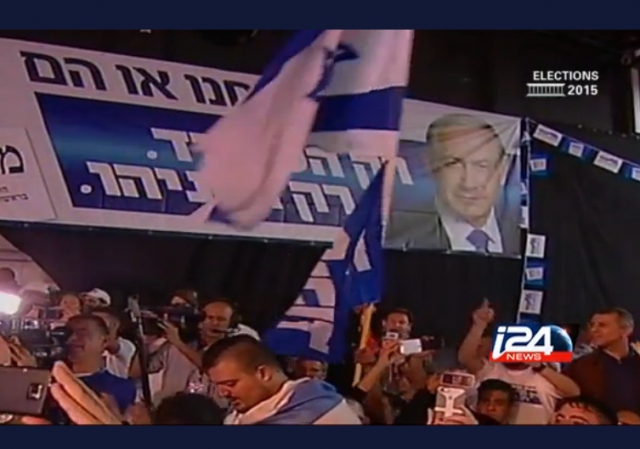 “This was an election between Bibi and Obama — that was on the ballot,” he said on Wednesday’s Special Report. “He did everything he could to unseat him, but he failed.”

Krauthammer criticized “the pettiness and the petulance” from the Obama administration regarding Netanyahu’s victory, which included a backhanded congratulatory statement and a delayed phone call from secretary of state John Kerry rather than President Obama. “I think the reaction of the administration is now reaching levels where it’s become unseemingly,” he said…

“It’s clear that Obama loathes Netanyahu more than any other world leader, meaning more than the ayatollah in Iran or Putin in Russia.”

Just yesterday, when it was clear that Netanyahu was the victor in Israel’s election, the White House doubled down on its criticism.

Paul Richter and David Lauter of the Los Angeles Times:

U.S. support for Israel at the U.N. is in jeopardy, White House says

The blunt comments by Obama administration officials illustrated how the campaign tactics Netanyahu used to win an unexpectedly strong victory in Tuesday’s election have further strained the historic ties between the United States and Israel. After six years of tension, relations between the two governments have frayed to a point not reached in decades.

This is a terrible trial balloon to float out of spite. http://t.co/XL9AVelPVd

I’ll leave you with this thought from Iowahawk:

Obama tried harder to influence the Israeli election of 2015 than to support the Iranian uprising of 2009.

the underlying problem is obvious: besides the fact that Bibi is a stud, and Obola a punk, Ear Leader’s hatred for Jews, Christians, personal freedom, the US & Israel are so blindingly apparent, even Helen Keller could see it, were she still alive.

it’s how the First Punk was raised. between the communists and the moose slime role models of his childhood, this hatred is the core of his worthless existence and his psychotic personality.

If I upvote you twice, will you tell us how you really feel about jug ears?

Netanyahu is smart, mature, courageous, loves his country and is willing to do whatever is necessary to protect it. IOW, he is the anti-Obama.

Unfortunately Bibi, like the rest of us, is just going to have to wait out the remaining two years of the loathsome Obama’s term, and pray that the spoiled and petulant twit doesn’t blow up the world in the meantime.

Haters gotta hate – Zero’s just doing what he does best.

It’s more than spite. It’s close to how Turkey treats Israel. Withdrawing the UNSC veto is only the first step. I think we should expect to see a 100% ending of all relations with Israel, diplomatic, military, intelligence, soon. Shouldn’t surprise us if Obama shuts the ’embassy’ in Tel Aviv and opens two new ones in Gaza and Ramallah. Obama is going for broke before he (hopefully) leaves office. He really does want to go down in history as the US President who waged war on the Jews. But American liberal Jews are stupid people. They would vote for an Obama third term as he opens up concentration camps in Montana for them.

It’s interesting that the word “petulant”.

China announced a regional bank, the US refuses to participate, and China uses the same word: “State news agency Xinhua described the United States as “petulant and cynical” for declining to join the Asian Infrastructure Investment Bank (AIIB). It said the bank was open to all nations but said Washington’s “sour grapes” left it looking “isolated and hypocritical.””

“The blunt comments by Obama administration officials illustrated how the campaign tactics Netanyahu used to win an unexpectedly strong victory in Tuesday’s election have further strained the historic ties between the United States and Israel.”

There’s your “hate Israel” meme for the near term. Obami are just steaming over “campaign tactics” which they have termed were “racist”. Why, you can hear their lil’ feet thumping like Parda shod jackhammers way out here in fly-over country.

The truth is that the Obami are incandescent that they didn’t manage to queer the Israeli election after their best efforts…and probably the expenditure of US tax money.

It’s a truly appalling spectacle. I hope it’s not lost on American Jews.

This article seems to concur with you: http://www.bloombergview.com/articles/2015-03-18/israel-chose-bibi-over-barack

Forgive me if I see it slightly differently. There seems to be all this focus on Netanyahu, as if he had the election to lose, when there actually was a strong opposition candidate, who may have lost the election all on his own.

Before Netanyahu said he would not support a “two-state solution” as the US has been proposing, Isaac Herzog promised to “ignite the peace process.” Herzog had to know he was over-promising, and Netanyahu called him on it.

Now, if Hamas were to repudiate its founding document, the Hamas Covenant, or if the Palestinians were to expel the Hamas, and most especially if the local Muslim tyrannies would give the Palestinians the right to buy their own homes with their own money in their countries, Netanyahu would have the credibility to make a real peace.

What blows my mind is that a US president just spent a boatload of taxpayer money on an ally country’s national election trying to unseat the incumbent. Reviewing my blog read list, nobody seems to give a shit about it.

and lost a fleetload of arms in Yemen.

By the way anybody paying attention to what’s happening in Tunisia?

Add that to the long list of illegal shit this administration has pulled that Barry’s blow-boy Eric Holder won’t do anything about. Watching those two cry together on stage when Holder “retired” made me think I was watching some sort of gay soft-porn flick or something. I wish they’d get a room and play “lame duck” for the next two years.

The way thing are looking today, getting on the Southern Poverty Law Center’s “hate list” means you are probably a true American hero(read Ben Carson)and winning the Nobel Peace Prize means you are an enemy to freedom, liberty and democracy.

Beneath his cool exterior, Obama is a little boy. Arrested emotional development due to the lack of a strong male role model.

The two-state (i.e. Israel and Jordan) solution was sabotaged by the Palestinian leadership. The terrorist attacks produced inadequate collateral damage. The subsequent separation or “apartheid” argument failed to justify the “Mandela solution”. There is an insufficient support for a “Kosovo justice” establishment. All they have left is spite.