The solution to every Democrat’s problem. 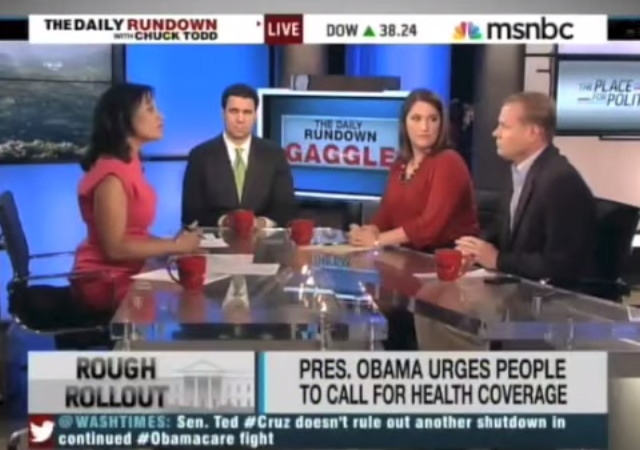 As we’ve seen time and time again, there’s no Democrat problem that can’t be solved by Republican overreach. Here’s how it works: A Democrat gets caught in a scandal, Republicans react to it, and suddenly the story is all about the Republicans.

MSNBC is particularly fond of this practice. David Rutz of the Washington Free Beacon has put together a clip video you can watch below. You may notice a pattern:

MSNBC Is Overplaying Its Hand

It didn’t take long for MSNBC to unveil one of its favorite talking points in response to Hillary Clinton’s email scandal at the State Department.

Wednesday, the day after a grisly press conference where Clinton tried to answer for deleting thousands of emails and why she had a personal server in the first place, host Alex Wagner posed a question the network loves when Democrats are in tight spots.

“To the Trey Gowdy part of the equation, there is a danger here for Republicans which is a frequent danger, that of overplaying their hand,” she said. “The fact that Trey Gowdy has said before Secretary Clinton’s testimony has even begun that he may need to talk to her twice, is he at risk of overstepping here?”

David Harsanyi of The Federalist recently addressed this issue:

Hillary Clinton used a personal email address housed on her own server to conduct her business while Secretary of State, a practice that may have been illegal, was definitely shady, and probably an enormous national security risk. We don’t know if the State Department signed off or if the White House was ever aware of what she was up to.

One imagines these things would concern those who claim to care about transparent government. But, though intrepid reporters in the mainstream media deserve much of the credit for bringing the story to our attention, many other journalists seem to have far more urgent questions on their mind.

Will the GOP Go Too Far?

If there is a scandal involving a Democrat brewing, we must immediately contemplate how the GOP will fare. Will those zealots overplay their hand once again? Will they make a mountain out of a BENGHAZI? Because, really, what’s more important (or easy) than finding some accommodating Republican to say something idiotic? We’re now on “overreach” watch. Remember the, “Will Democrats overplay their hand as the GOP is plunged into scandal?” story? I don’t either.

Seems that actually MSNBC and the Dimocrat Party hold the Monopoly on “Overreach.”

One current example (among many): “Seattle’s New $15 Minimum Wage Law Causing Restaurants to Close All Over the City” ..The truth is, businesses that can pay more often do. But when a government swoops in and demands that businesses pay more it is the death knell for the business sector.
….

Obama has been running around saying that higher minimum wages would be a “raise for America.” This is populist bull hockey. Only 2.6 percent of the country works for minimum wage pay scale. Further, most people who make that wage are in transitory jobs that they never keep for long.

LIBERALS ARE LOSING CONTROL The liberal intelligentsia has been in control of entertainment for 80 years. This control is now fading…Demographics are against liberals in all four media….

The picture that springs to mind is the eGOP…not “over-reaching” but…FUMBLING.

Lemme see some ball-carriers with the pig pulled in tight to their chests, with that thing securely wrapped up in two arms and being carried toward the freaking goal.

Stick with golf analogies. It is easier when you are talking about hitting the puck with a bat to get it closer to the goal and getting a house finch if you get it there using fewer hits than expected.

If this were really a caring compassionate conservative website the owner would program in an automatic thumbs down on each of your posts and save some poor person the time and effort of searching all the posts for ones by you.

Maybe then they could use the spare time to sweep up their mom’s basement and do their own laundry.

We could look into that. It would be a quick, easy little programming tick.

Actually, though, would I really deprive some little, stunted soul that miniscule moment of exultation when they find a post and imagine me writhing in pain at a “down-twinkle”?

No, not really. Besides, reading them will perhaps be an illuminating experience over time. One lives in hope.

Does anyone actually take MSLSD seriously anymore? Between “tingle” Matthews and the Screecher, their evening lineup is a faltering disaster in the ratings department. It’s to bad that NBC is so ideologically driven that they’re willing to throw money at losing propositions merely to have a “progressive” outlet.

The only GOP overreach is that by boehner, mcconnell and prebus when they contort to shove their heads up their asses.