Rand Paul next to jump in the presidential pool

Rand Paul next to jump in the presidential pool

And then there were two 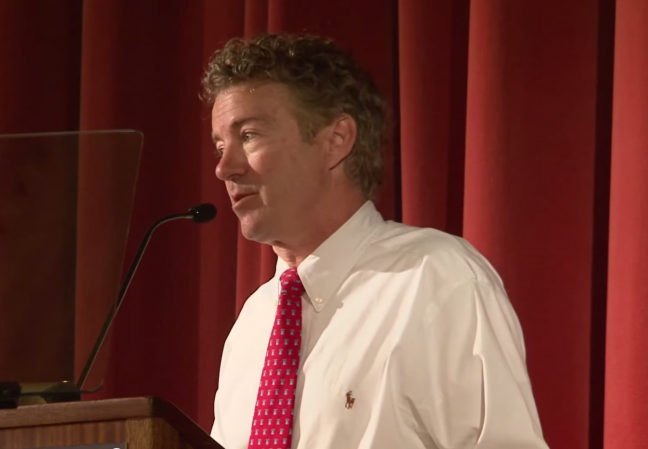 Senator Rubio is scheduled to announce his presidential bid April 13th, making him the third Senator to join the Republican primary fray.

Waiting until the day after the NCAA basketball championship, Sen. Paul will formally announce his presidential run April 7 at a rally that morning.

Paul will announce at the Galt House Hotel in Louisville in what is being described as an historic event by event organizers. 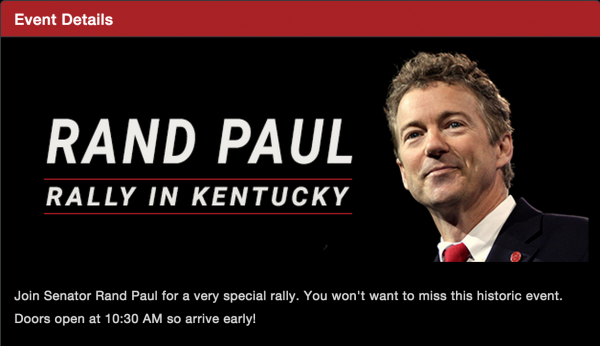 The event will prominently feature Kentucky in an effort to capture the historic nature of the announcement for the state. That also dovetails with the desire of Paul’s budding campaign team to build a sense of state pride around his candidacy, building a foundation for the senator’s presidential campaign and keeping his approval numbers aloft as he tries to run for re-election to his Senate seat simultaneously in 2016.

Following the announcement, Paul will leave Louisville to embark on a nearly week-long trip to the early-voting states of Iowa, New Hampshire, South Carolina and Nevada, with fundraising stops and grassroots rallies in a handful of other states along the way. Paul has traveled extensively to the early states already, including a return trip to New Hampshire this weekend.

As the Times and others have noted, Paul’s early-April announcement coincides with the next U.S. Senate recess and allows the senator to enter the race at the start of a fundraising cycle, giving him a full quarter of raising money before he files his first campaign finance report.

Senator Paul has some possibly deal-killing attributes, particularly regarding foreign policy. But he is one of the more articulate members of the Republican bullpen, far beyond most of the rest. He’s one of the few possible candidates who could outline positive goals and policies for a future for all Americans – which most other Republicans (or perhaps their political advisers) appear never to have even considered.

So yes, get that hat in the ring, and we’ll wait to hear what he might have to say, and judge how convincing it is.

The Republicans can be proud that they are producing a very nice class of candidates for the Presidency of the United States.

I have my preferences, but I’m thrilled to see such good choices becoming available.

If we get enough GOP candidates – it will make the MSM look like they are playing Wack-a-Mole as they smack down each front runner who pops his head up – with their faux reporting.

I’m 25. Let me explain his appeal. The debt is suffocating. The trade-offs against Liberty are way too far from the freedom I read about in the revolution. I want the federal government righted morally as soon as possible. End the debt. Rescind the power we have abdicated to DC. I’m willing to sacrifice a lot for that. Such as, conceding some of the fruitless currently impossible cultural battle that the left dominates. He disarms the conversation with Liberty. I’m not a fan of the victim culture and propagating human weakness but liberty in time cures that condition.

I want to right this ship as fast as possible and I think Rand is the Man to do it.

Rand disqualified himself with his comments on Ferguson and his stroking of Sharpton’s inner thigh over lunch, at least for this election cycle.

Rand may be as nutty as Ron.

What?! That thing to Sharpton – you’re being metaphorical, right??

Um… There are pictures. I kid you not.

Unlike Ted Cruz, Paul and Rubio can’t run for reelection to their Senate seats as their states’ laws now stand. Texas allows a candidate to be on the ballot for two offices at once, so Cruz isn’t affected.

Even if Paul were not an isolationist and nearly as nutty as his father, even if he hadn’t managed two campaigns which were mainly funded by The Spotlight mailing list, he lacks any experience. He can, if he wishes, become the New Ron Paul, perennial candidate with a fanatic following of potheads and pedophiles.

Paul is better situated than Rubio. As many suckers learned by sending money to Christine O’Donnell, federal candidates can pay themselves a generous salary from campaign funds as long as they hold no federal office while doing it.

Both would better serve everyone’s interest by putting work ahead of ambition, and gaining some experience over time.

I’ll leave Rand to change my mind, but I get a totally unevidenced if strong hunch that most of Senator Rand remains beneath the surface, like an iceberg. I see Rand, but over there I also see Walker, Cruz, Perry, even Rubio, and I do not feel compelled to support him.

Much could change by November 2016, but given the state of the world, with Russia, North Korea, the Middle f**king East, I’m not sure a thumb-sucking isolationist (read pacifist) is the way to go.

You are correct that much of Rand is below the surface. As we all know, you can’t have an intelligent discussion on any issue anymore, if the press and the crazy left disagree with you.

Rand believes in freedom from constant government aggression, which the press and the left are in favor of. So they gin up crap to kill whomever disagrees with them. Rand understands the game, so is trying to keep much below the radar.

As for his pacificism, it seems to me the one advantage of Obama’s muslim sympathizing, is that the Arabs are now beginning to see America isn’t their backstop; that they’re going to have to handle Iran themselves. I would much rather Arab blood be lost in this tragic endeavor, than American blood.

However, looking at the long game, if we were so fortunate as not to be attacked a la nagasaki, depending on the extent Paul could achieve his goals, stated and unstated, we would have relief from illegal aliens. If the Fed no longer loans the U.S. government money, and if you begin bringing all off-balance sheet items onto the balance sheet so the true extent of the problems are visible, there won’t be much choice but to dramatically decrease the size of the federal government.

If this were done, welfare and all of the other thousands of other things the federal government spends money on, would be reduced or on the way to elimination, so that illegal aliens would find no trough to feed at.

I just don’t know if the illegal aliens will suck the blood out of us before Paul could eliminate the benefits they receive upon arrival. I can make educated guesses about what Paul wants to do but Washington, D.C. is a very big ship, and turning it will be slow and laborious.

Understanding Libertarians would be far easier if there weren’t seemingly 57 varieties.

As for all the wonderfulness you feel would ensue from a Rand presidency, these are words, hopes. I look at Walker and see a man who did more than talk about it all, he does it and continues to do it. So, I have no compelling reason to support Rand in lieu of Walker – or Perry, or Jindal, or Cruz.

There are 57 brands of Libertarians, just as there are 64 brands of GOP. Everyone is a little different in life, this is no slam on Paul.

I was very active with them for years so I have a good handle on them. If you’ll note, in my comment, I specified Paul would be good “depending on the extent Paul could achieve his goals, stated and unstated.” At this point, I’m unconvinced Paul could accomplish them, but I didn’t think Obama could do this much damage either.

The presidency is a powerful post. Or can be.

Jindal is GREAT on muslims. Ban islam by all means, Geert Wilders edifies as always on this.

Cruz might be as good on Paul on the principles. So far, Cruz is my choice.

But anyone that says Paul is crazy, or that his Dad is, either doesn’t know what they believe, or doesn’t understand it, or is a leftie of some stripe. I’ve been interested in the banking system since I was in college, BEFORE I heard of libertarians or Ron Paul. There’s a reason Andrew Jackson was adamant and persistent in his efforts to dismantle the national bank. I tip my hat to him. He had a “limited” education, but evidently, a limited education then is worth more than a ph.d. now.

Boys and girls! It is okay to like Rand Paul’s ideas
and intellect and also like Ted Cruz or another preferred
candidate of choice.

It is annoying to read so called conservative postings
that call Rand Paul a nut job. He is not.

Save your crazy nonsense for the democrats.

I said Rand may be as nutty as Ron. May being the operative word. While I may agree with Ron Paul 85% of the time, maybe higher, I still think he is a nut. YMMV