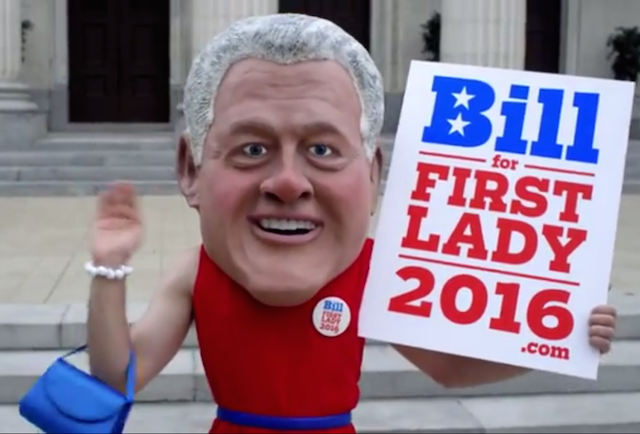 If you’re not at a point in your day where you can handle a Bill Clinton bobble head teetering around in high heels and a dress, click away now, because the “Bill for First Lady 2016” meme factory is back.

Anyone with a TV or internet connection knows that political ads are, for the most part, boring, demographic-specific, and safe. But this pro-Hillary 2016 group’s new efforts to create excitement around another Clinton candidacy is anything but.

They put a Bill Clinton bobble head in drag…and it’s part of a bigger strategy to GOTV:

We are a national online grassroots movement of young Americans to support Hillary Clinton for president in 2016 and make “herstory” by putting a woman in the White House. With a focus on creating youthful viral videos, catchy campaign memes and sharable social media content, as well as live “Bill” campaign events in cities and on college campuses across the nation, BillForFirstLady2016.com PAC (Political Action Committee) is a strategic effort to move, motivate and inspire younger voters to get involved.

Let’s get this over with:

Is is brilliant? Is it bizarre? Is it both? Did that little girl just say “va-jay-jay?”

Yes, she did; and yes, it is. Both brilliant and bizarre—maybe. I’m still trying to decide on the “brilliant” question.

This counter-culture movement has been around since 2005, when a gay-rights activist named Luke Montgomery decided to try something different in campaign messaging:

“BillForFirstLady.com is here to beat Republicans to the punch—and the punch line—by making the inevitable ‘Bill as first lady’ jokes old before they can hurt during the election,” Montgomery said in 2008.

A recent Craigslist ad promoted a pro-Hillary event at a gay pride parade in Miami that also featured the “Bill for First Lady” theme.

Montgomery changed his name to Luke Sissyfag in 1993 to bring attention to discrimination against gay people. The following year he unsuccessfully ran for mayor of Washington, D.C.

He later changed his name back to Montgomery and said he wished “people would forget about the person named Luke Sissyfag and move on.”

I said above that I’m still trying to decide whether or not this is brilliant; this is mostly due to the fact that these ads are just so…weird. Here’s the other one they’ve released:

My verdict? “I don’t get it.” Out loud. Multiple times.

As in, in my head, I understand that using humor, and small children, and a goofy character, can grab two demographics (women and younger voters) with one stone, but on a “let’s rally the troops” level, I’m just not sure it’s quite…there.

But, as Montgomery said, here’s here to “beat Republicans to the punch,” and that’s a goal that’s still easy for Democrats to achieve.

It’s a low bar, but they hop over it enough times, they’ll start winning voters.

Let’s raise the bar, shall we?

Can’t wear it! It has stains all over it. Plus Bill is angry that it has even cast a shadow on his presidential portrait.

What would his “first lady” cause be?

Maybe Bill’s cause could be unwed mothers? 🙂

Finding a cure for Peyronie’s Disease? Bill could be the face of the ad campaign …

Championing unwed mothers? That would be like an arsonist championing the prevention of fires.

Somebody is aiming for the teenybopper market.

Wonder what brand of lace underwear he will be wearing as First Lady?

And what kind of tax deductions will he get for them too?

Not lady, trans. Bill could be the First Trans.

Oh man… Luke Sissyfag… what memories! Honestly, he was a wonderful person to talk to, a real advocate for raising the awareness of AIDS back in the ’90s. I honestly thought he was gone in body, not just in name. I’m kinda happy he’s still around; he definitely helps define the outer edges of Political Action.

No, really… he was a lot of fun to listen to, not full of hate and venom like my current crop of Political Thought Leaders in Seattle.

So basically all their arguments boil down to: she’s a woman, so let her have the presidency.

By that metric, there are a lot o other qualified candidates out there too. Hearing the little girl talk about stopping “republican attacks on reproductive rights” or the other one saying “we want choice” was cringe worthy to me.