The horse race has officially begun 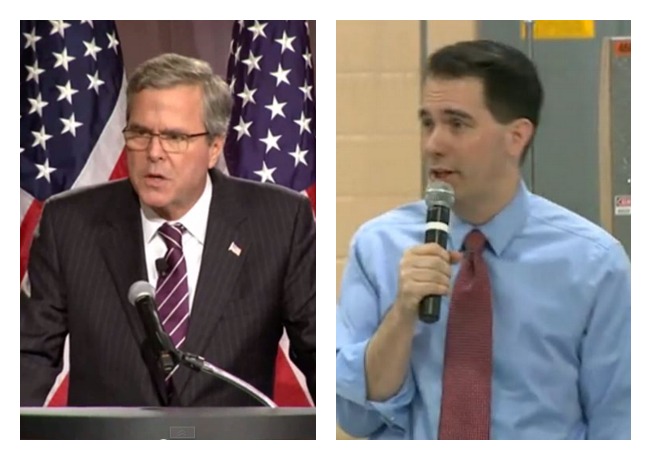 Still ten months away from New Hampshire’s primary, and with only one official candidate, this election season is sure to be a horse race. A poll released by Suffolk University Thursday shows Jeb Bush and Scott Walker taking early leads among likely voters.

Conducted between March 21-24, Jeb Bush is the early favorite of 19%, with Walker trailing just behind at 14%.

According to Suffolk University:

An incredibly crowded field, splintered special interest groups, PACs galore, and a primary race starting 20 months before the election, the 2016 election cycle is sure to be a fun one.

Patrick O’Connor explains what this means for candidates joining the race:

The candidate field looks unusually crowded, with more than a dozen contenders appealing to different slices of the GOP. The rise of super PACs allows candidates to stay in the race longer than before. And nominating rules meant to compress the process may complicate a front-runner’s ability to amass the delegates necessary to win.

The result, some GOP strategists say, is that next year’s contest has the ingredients to be the longest since then-President Gerald Ford prevailed over Ronald Reagan at the 1976 convention. The lengthy primary is an outcome that party leaders hoped to avoid after the 2012 race that left their nominee, Mitt Romney, battered and broke heading into the general election.

The potential for an extended primary stems from what many Republicans believe to be a positive development: a crowd of viable candidates expected to run in 2016 and a set of GOP donors who appear eager to finance their bids.

“This cycle, because of all these structural rules changes and the advent of super PACs, people are not going to drop out,” predicted Bill McInturff, a Republican pollster who advised Arizona Sen. John McCain in both of his presidential bids.

Candidates abandon their bids and unify behind the front-runner when either they run out of money or a rival has gathered a majority of delegates, conditions that won’t materialize quickly this time around, he said. “Republicans have created a system where, because of super PACs, it is hard to project someone winning until late May or early June.”

Jeb Bush huh? Certainly appears that the low info/no info Dem disease has become entrenched in the Republican voters as well. Damn dumb zombies. No wonder America is in a free fall to hell

You’re talking New Hampshire – plenty of those Northeast “liberal” Republicans up there – that’s why Bush shows strong, he is a NE liberal Republican.

I don’t trust pollsters, they can be bought.

New England is Bush territory — the current generation thinks they are yahoo-Texans, but they are really dyed in the wool Yankee aristocrats.

Carpetbaggers one and all.

This poll is really about name recognition. Walker will surge once he spends some time there. Bush has the hard core rhino vote.

RINO vote … not rhino, my beloved namesake, that I used online since the previous century. lol

But I’m also RINO in that the tea party is separate from today’s GOP. 🙂

While these polls are nearly meaningless this early, it does demonstrate that Jeb Bush is not a lock, nor anywhere likely inevitable. If conservatives can get behind one, or even two candidates, it means that the Bush family won’t have a viable family member to run the next 10 to 20 years.

I’m going to print up vomit bags, like they have on airplanes, with the GOP logo on them. Karl Rove can hand them out to conservative voters before they go into the voting booth and vote for Jeb.

The Bush family has a following in New Hampshire, some of it due to their Connecticut origins and maintaining a long-time family vacation home in Maine. But the state hasn’t been too kind to most of them in the GOP primaries. The only time a Bush won without being the incumbent President was 1988, when GHWB won with 38%.

19% has never won the NH Primary in either party.

Paul will have at least 15%, perhaps more, due to the state’s traditional streak and its being the target of the “free state” movement, although only a few thousand in number.

Pat Buchanan won it once and finished second once as an anti-Establishment conservative, so there is hope for Cruz.

To win that primary, you have to spend a lot of time in the various communities doing “retail politics” in the most basic sense. There’s an old New Hampshire joke where one citizen asks his neighbor what he thinks of Candidate X, and the neighbor answers, “I’m not sure, only met him three times.”

Polls at this point are completely useless for NH. They will be somewhat accurate within 30 days of the vote – but still volatile.

I absolutely refuse to believe that the very best and brightest America has to offer has putrefied into Jeb Bush and Hillary Clinton. I will not believe it. And we can’t afford to believe it, not after eight years of Hopenchange.