“We have to assume it’s completely compromised and gone”

Earlier this year, Iranian-backed Houthi rebels evolved from regional threat into formidable occupation force. They moved out of their strongholds in north Yemen to threaten, menace, and finally occupy the capital city of Sana’a.

Conditions deteriorated to the point where the U.S. embassy was forced to evacuate; reports quickly surfaced that the evacuation was botched, and questions arose about the status of weapons, vehicles, and other military aid supplies left behind when US forces left the region.

Without an available surveillance infrastructure, the Defense Department has been unable to monitor the movement of small arms and other supplies, and now the Pentagon has come forward saying that they’re unable to account for $500 million worth of supplies.

In recent weeks, members of Congress have held closed-door meetings with U.S. military officials to press for an accounting of the arms and equipment. Pentagon officials have said that they have little information to go on and that there is little they can do at this point to prevent the weapons and gear from falling into the wrong hands.

“We have to assume it’s completely compromised and gone,” said a legislative aide on Capitol Hill who spoke on the condition of anonymity because of the sensitivity of the matter.

U.S. military officials declined to comment for the record. A defense official, speaking on the condition of anonymity under ground rules set by the Pentagon, said there was no hard evidence that U.S. arms or equipment had been looted or confiscated. But the official acknowledged that the Pentagon had lost track of the items.

Who likely got their hands on it? Either al Qaeda, or the Houthi—and neither prospect offers much hope for their return.

WaPo created an infographic displaying military aid the US has sent to Yemen since 2010: 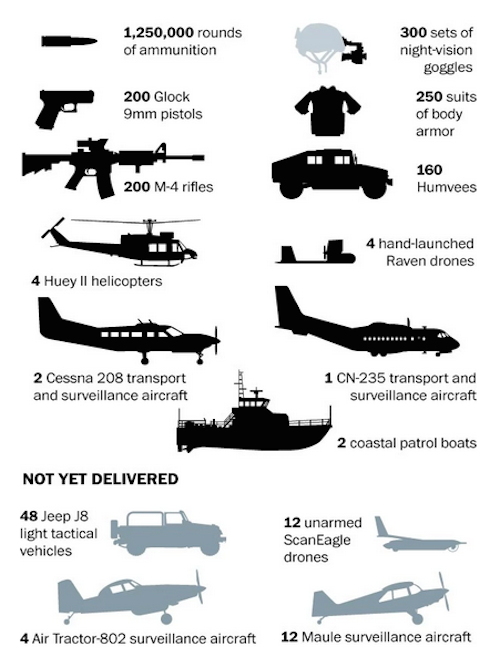 This of course raises more questions about the DoD-approved order for troops to abandon and destroy their weapons, and reports that the Houthi managed to seize military vehicles after troops departed.

Full accountability is a near-impossibility in a place like Yemen, but for $500 million in sophisticated equipment to simply disappear signals real problems with how State and the DoD handled the evacuation.

The Pentagon has halted all future shipments of military aid to Yemen.

300 sets of night vision goggles! So much for the US Army motto “We own the night”

My thought: The goggles are the most dangerous loss.

“We have top men working on it right now.”

Just the Pentagon did when the Red Chinese took over China. Guess what equipment was used by the Chinese when launched their offensive against American troops in Korea? That is right American military hardware.

Loss of equipment is embarrassing. However, this is much easier than explaining to Congress the equipment was already destined for our Iranian allies.

This is the tip of the iceberg. Imagine the weaponry we don’t know about that has been delivered to radical crazies by our traitor president.