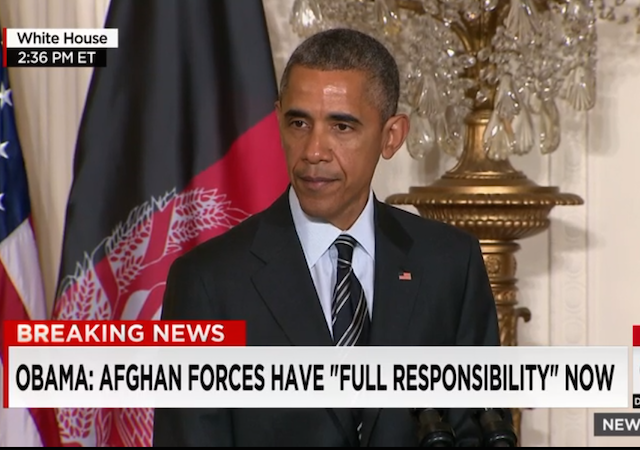 And down goes another campaign pledge!

Today President Obama held a joint press conference with Afghan President Ashraf Ghani to announce that the United States will maintain its 9800 troop count in Afghanistan through the end of the year. The President had previously promised to reduce that troop count to 5500.

Troop levels for 2016 will be decided later this year.

We’re changing the game again, but we’re not quite sure about the details. Sounds about right—but I’m not sure it’s unwarranted. In Afghanistan, Ghani is looking at the beginning of what is known as the “spring fighting season,” wherein extremists look to Afghanistan for the purposes of recruitment. This may be another broken promise on Obama’s part, but this isn’t “tweak” in existing plans; the entire drawdown was scrapped, ostensibly because Ghani asked for help.

This was Ghani’s first trip to the United States since being elected; during his time here he signaled a significantly different approach to the US-Afghani relationship than was used by former President Hamid Karzai.

“The institutional gains that would be achieved through the (training), advise and (assisting) role is what will guarantee that the investments of the last 14 years pay off,” Ghani said during Tuesday’s press conference.

Ghani also discussed his country’s need for support during a Monday press conference with Secretary of State John Kerry and Secretary of Defense Ashton Carter.

“Peace is our goal, but peace from strength, an enduring peace that will bring regional cooperation,” Ghani said, acknowledging that President Obama will make the decision on troop numbers.

“What we have emphasized and agreed is that we are strategic partners. We are bound by common interests and will act together to ensure both the safety of United States and the safety of Afghanistan. That is the important consideration. Numbers are a means; they are not an end in themselves,” Ghani said.

We’ll keep you updated on how the new strategic plan “evolves” over the coming weeks.

Great, more good men and women will die so Obama can pretend he’s not a gigantic pussy and gives two shit about anything other than his foreign policy numbers.

He has no plan, no goal, and no cares about Afghanistan other than the polls tell him people think we shouldn’t pull out.

Afghanistan’s major export is heroin. It comes from their poppy plants. The USA built them 8 lane highways … to make their delivery system even better.

Eight lane highways? The best road in Afghanistan leads to the capitol and is dubbed Highway 1; it is the single most heavily traveled road in the country. It is by our standards primitive – a poorly maintained two lane blacktop with no over/underpasses.

I don’t know where you got your information but there are no such roads anywhere in the country. The closest you could come would be if you counted the runways and taxiways at Kandahar International Airport as “roads”.

And in related news, Cindy Sheehan was seen setting up camp outside Obama’s favorite golf course. Oh wait, no…..

Where in the world is Cindy? . She appeared on Keven Cohen’s call-in afternoon radio show when he was still on WVOC in Columbia….and she IS indeed a huge Obama supporter and Kev exposed her as merely a partaisan shill and NOT a war opposer!