It would be nice if he was working as hard to disarm Iran. 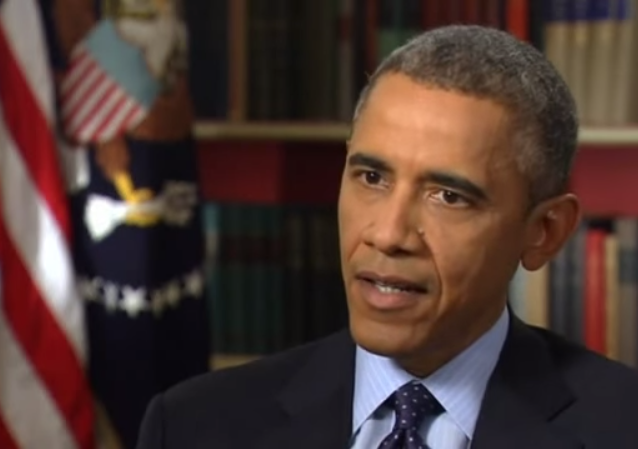 In an interview with Reuters published yesterday, President Obama launched a pre-emptive strike against Israeli Prime Minister Benjamin Netanyahu’s planned speech before a session of Congress. I won’t attempt to fisk the whole thing, but a few things stuck out as patently false.

Now keep in mind the prime minister, when we signed up for this interim deal that would essentially freeze Iran’s program, roll back its highly enriched uranium – its 20 percent highly enriched uranium – and so reduce the possibility that Iran might breakout while we were engaged in these negotiations, when we first announced this interim a deal, Prime Minister Netanyahu made all sorts of claims. This was going to be a terrible deal. This was going to result in Iran getting 50 billion dollars worth of relief. Iran would not abide by the agreement. None of that has come true.

I’m not sure that Netanyahu made a claim of $50 billion in sanctions relief. I believe the number was closer to $20 billion and that the actual relief Iran got was closer to the Israeli estimate than the administration’s lowball estimate. But I don’t have the time right now to research this, but I’m skeptical about this claim.

What I do know is false is that as much as the President pretends that Iran abided by the Joint Plan of Action (JPOA), Iran violated it with impunity. The JPOA (.pdf) spelled out an obligation that Iran had to come clean with the International Atomic Energy Agency (IAEA) about its past nuclear research. Here’s the language:

A Joint Commission of E3/EU+3 and Iran will be established to monitor the implementation of the near-term measures and address issues that may arise, with the IAEA responsible for verification of nuclear-related measures. The Joint Commission will work with the IAEA to facilitate resolution of past and present issues of concern.

How do we know that 15+ months later Iran has not fulfilled this obligation? Because the IAEA reported the ongoing violation … yesterday morning!

The Agency continues to undertake monitoring and verification in relation to the nuclear-related measures set out in the Joint Plan of Action agreed between Iran and the E3+3 countries.

Iran has yet to provide explanations that enable the Agency to clarify two outstanding practical measures agreed in May 2014 in the third step of the Framework forCooperation. Iran also has still to propose new practical measures.

Pay attention to that first paragraph quoted above. The IAEA cannot confirm that Iran does not have an undeclared nuclear program. But that is precisely what Iran was obligated to account for and it hasn’t!

Also under the JPOA Iran was not allowed to test any new model of centrifuges. But last November it was reported that Iran had fed uranium gas into a previously untested IR-5 centrifuge. True, when Iran was confronted it stopped feeding uranium into the IR-5 but that just means that Iran backed off when it was caught cheating, not that it didn’t cheat! (Likely Iran was testing to see what would happen if it cheated. I’m sure that Supreme Leader Ayatollah Ali Khamenei noted with great satisfaction that cheating will bring no more than a rebuke.)

Iran contrary to Obama’s assertion did not abide by the JPOA.

(Apparently the president isn’t the only member of his administration who has a hard time assimilating the IAEA’s report.)

Really it wouldn’t have taken much to challenge the president on his claims – especially because the news was current – unfortunately his interviewer let him get away with the false assertion.

But if the best President Obama can do against Netanyahu is to use a patently false claim to push back, Netanyahu should be able to shape the narrative tomorrow.

I only wish that Obama was as determined to prevent Iran from developing a nuclear weapon as he is to (vainly) undermine Netanyahu’s credibility.

It makes zero sense for the president to comment and criticize a speech that has yet to be given. Maybe if valarie Jarrett wasn’t telling him what to say he would actually listen to what Bibi has to say. This is why we have 2 ears and one mouth. We should listen twice as much as we speak. Unfortunately the president is tone deaf when it comes to what is best for America.

I found it very amusing that Netanyahu mentioned “how much had been written already about a speech that had not yet been given” in his opening remarks.

Our preeezzzyyy always has a set of lies ready to go no matter the topic. This was no different. Not one word of truth will ever cross his lips.

Isn’t it a shame that our President has been so disingenuous that we must doubt everything he says. And what do you know? He continues to tell half truths, mis-direct and outright lie. Will our faith in the Presidency ever be restored even after Pinocchio is gone?

Don’t know that I’ll ever really trust our government again after Ozero is done, even if things improve remarkably after he’s gone.

We know that this administration works closely with Hamas (986 million dollars in the 2009 stimulus) and the Muslim Brotherhood. One can only conclude that Obama wants the land between the (Jordan) river and the sea cleansed of Jews. Didn’t this administration advocate sending US troops to Gaza and (so called) PA administered territories to ‘protect’ them from Israel? Always remember, Hitler was a progressive.

This president has damaged relations with our allies to such an extent that it rivals our break with Great Britain in 1775.

My prayer is that PM Netanyahu exposes what an extremely bad deal that this administration has “negotiated” and that it prompts the American people to outrage over the Administration’s quisling behavior.

Please ignore the down vote – i hit it accidentally before ‘reply’.

Did anyone really expect Netanyahu to passively sit back and watch his country sold down the river?

“Credible assurance” is a good term for the IAEA. It’s not like they can give any kind of absolute guarantees; anyone could have something undeclared. (There was some nonsense about Saddam Hussein like that; eventually Bush just told us he didn’t really care, the possibility Saddam might engage in a future weapons program was more important to him than the mere existence of one right then.) Iran just doesn’t seem to be all that convincing that it has nothing it is hiding. The consensus on that is apparently quite broad.

Hmmm… What does THAT tell us about the Collective…???

Actually, the subheadline says it all:

“It would be nice if he was working as hard to disarm Iran.”

That is our core problem, isn’t it?

Obama is not counting violation of verification provisions as a violation of the agreement. This is a very important point.

If Obama did take violation of verification provisions as seriously as a violation of the underlying agreement, he’d have to agree George Bush the Younger was right in 2003, whether or not any weapons of mass destruction were later found in Iraq because Iraq violated the terms of the 1991 ceasefire and there’s no question about that.

Re: Chemical weapons in Iraq after the invasion.

In the difficult calculus of war, competing missions had created tensions. If documenting chemical weapons delayed the destruction of explosive weapons that were killing people each week, or left troops vulnerable while waiting for chemical warfare specialists to arrive, then reporting chemical weapons endangered lives.

In 2004, Charles A. Duelfer, who led the Iraq Survey Group, a task force established by the C.I.A. after the American-led invasion, published a lengthy compendium on the state of Iraq’s weapons-of-mass-destruction programs, which included sections describing the American recovery and destruction of a small number of chemical warheads and shells that year. An early 2005 addendum updated the information.

The United States then fell nearly silent as troops encountered more chemical shells, publicly releasing only snippets in 2006. By then, the number of encounters with chemical weapons in improvised bombs had increased. Soon more troops were wounded by them, as secrecy prevailed….

…Further, the United States declined to share precise locations for the recoveries of chemical munitions. “U.S. representatives indicated that the exact locations are considered sensitive,” the report said….

The Pentagon has said the exigencies of war required that the weapons be destroyed hastily and in the open.

The purchases were made from a sole Iraqi source who was eager to sell his stock, officials said. The amount of money that the United States paid for the rockets is not publicly known, and neither are the affiliations of the seller….

…The Iraqi seller would then periodically notify the C.I.A. in Baghdad that he had more for sale, officials said.

The agency worked with the Army intelligence battalion and chemical weapons specialists, who would fly by helicopter to Iraq’s southeast and meet the man for exchanges.

The handoffs varied in size, including one of more than 150 warheads. American ordnance disposal technicians promptly destroyed most of them by detonation, the officials said, but some were taken to Camp Slayer, by Baghdad’s airport, for further testing.

One veteran familiar with the program said warheads were tested by putting them in “an old cast-iron bathtub” and drilling through their metal exteriors to extract the liquid sarin within.

The analysis of sarin samples from 2005 found that the purity level reached 13 percent — higher than expected given the relatively low quality and instability of Iraq’s sarin production in the 1980s, officials said. Samples from Boraks recovered in 2004 had contained concentrations no higher than 4 percent.

On the first day of negotiations it would have become clear Iran would not give up its nuclear program nor its ballistic missile program. All Obama wants is a deal that at least *appears* to delay Iran’s emergence as a nuclear armed state. It will be a farce, but for the next 21 months or so Obama can say he made a deal that stopped Iran’s progress on nuke building. That’s all he wants. The value of the deal means nothing to him.

One of the very first rules of negotiation is to walk away from an opponent who’s screaming at you.